Following my earlier reviews of the Breitkopf & Härtel complete Bach organ works (for Volumes 1,2 & 4 see here,Volume 3 here, and Volume 8 here), I now complete the eight editions published to date with reviews of Volumes 5, 6, and 7. Two more volumes (9 & 10, with the Choral Partitas and individually transmitted Choral settings) are in preparation. As with all volumes in this edition, the type face is clear and well-spaced and page turns seem to be sensibly arranged, where possible. Editorial suggestions are clearly delineated. Prices are based on the number of pages. 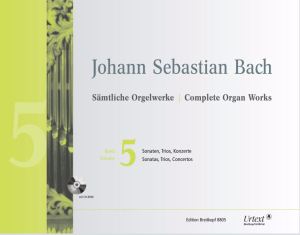 Volume 5 includes the well-known set of Six Sonatas (BWV 525-530, Five Concertos (BWV 592-596) and various individual Trio movements, including BWV 583, BWV 585-587 along with interesting early versions of BWV 527 and 528. Many of the pieces are arrangements of pieces by other composers. The CD-ROM include Bach arrangements of eight trio movements by others. The Concertos included are the ones specifically for organ with pedals, omitting the many concertos without pedals. Although many of these manualiter concertos also sound well on the organ, Pieter Dirkson argues against their being intended for the organ, as other commentators have suggested.

One of the key features of all volumes in this Breitkopf edition is the extensive introductions and commentary, in German and English, something missing from most other Bach editions. The English commentary can be downloaded from the website. For this edition, Pieter Dirksen comments the history, sources and background to the music as well as performance practice and registration. It is precisely the fact that these works derive from chamber-music models that leads to individual considerations for each work group. Included amongst the registration comments is the concept that I have long held; that the Trio Sonatas and Concertos should be registered moderately, often with single stops, to reflect the essentially chamber music format. Dirksen proposes the use of 4′ stops and 8′, rather than 16′, pedal lines. All this makes perfect sense to me.

Volume 6 includes the Clavierübung III (including the four Duets), the six Schübler-Choräle, and the Canonic variations on Vom Himmel hoch. The common thread between these three is that they were all printed under Bach’s control. In case of the Clavierübung III, the printed text is the only source, with no other manuscript or draft copies. However, as Werner Breig’s discusses in his notes, there are some clues as to process leading up to the final publication, including the addition of several pieces that now seem essential to the set, including the enclosing Praeludium and Fuga. Since the publication of the Neue Bach-Ausgabe, more research has gone to various aspects of the work, including the engravers used by Bach.

The Schübler Chorales are named after the engraver and publisher, who seemed to have had a freer hand than was the case with the other publications. The printed edition contains several errors but, fortunately, Bach’s personal copy has survived with his own revisions and corrections to the published text, which was not re-published. The Canonic Variations on Vom Himmel hoch are particularly interesting in that there are two principal sources, which differ in the order of the movements. This edition usefully prints both versions, together with a copy of the complete original. Usefully, the commentary (the English version is downloadable from the website) includes the opening bars of the printed editions. There is also a link to a short list of corrections here. 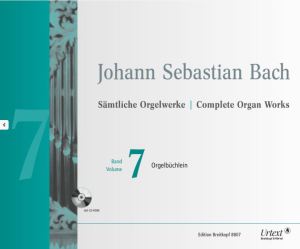 Volume 7 has the complete Orgelbüchlein. As is well-known, only 45 of the planned 164 chorales were set, the empty pages being a frustrating reminder of what might have been. On that topic, it is worth mentioning the Orgelbüchlein Project a major international composition project aiming to complete the Orgelbüchlein, curated in the UK by William Whitehead. Editor Sven Hiemke describes the background to the collection, with comments on the compositional style and the supposed purpose of the collection. A complete list of all 164 titles is included, noting when the completed ones were copied into the book. The CD-ROM includes early versions of four chorales and variants on a further four. The principal difference from the original is that the pedal part is given its own stave, rather than the two-stave format of the manuscript. A number of pages from the original are included.