Having been not entirely enthusiastic about Dragon Voices, the last recording from the European Music Archaeology Project (EMAP), it is nice to make up for that with my enthusiasm for the latest from that project, with this recording featuring Palaeolithic bone flutes and percussion. All my earlier concerns about the choice of repertoire are overcome with this imaginative look at the musical possibilities of the reconstructions of four bone flute, based on originals dating back around 40,000 years ago.

The reconstructions are made from the radius of a whooper swan, mammoth ivory, the radius and ulna of a griffon vulture.  Depending on the make-up of each instrument, Anna Friederike Potengowski uses two blowing methods, one holding the flute at an oblique angle to the corner of her mouth, and blowing on the opposite edge of the tube, a method used by players of the Middle Eastern nay and giving the ability to make subtle and expressive changes to the pitch. The other method has the flute resting on the lower lip, as in the South American quena, and results in more stable tuning. 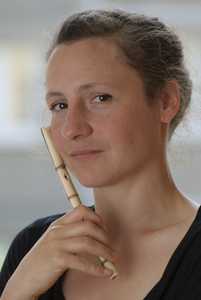 Anna Friederike Potengowski and percussionist Georg Wieland Wagner present a fascinating sequence of pieces, composed by one or other of them, improvised by Anna, or composed by John Cage (is enigmatic and evocative Ryoanji, with its floating melodies over a sequence of complex rhythms, here played on 2 flints) and Reverie composed by Rupert Till, director of the University of Huddersfield’s contribution to EMAP. Although modern percussion instruments (marimba, vibraphone) are occasionally used, much of the percussion sound comes from natural elements available to Palaeolithic people, such as stones, shells, dry grass, and water.

Half of the tracks are for the solo flutes alone, composed or improvised by Anna Friederike Potengowski. In sharp contrast to the ‘look what I can do’ approach of Dragon Voices, all are, to me at least, convincing representations of what ancient man might have done with this little instruments. And the pieces with percussion are evocative and entirely apt, despite being more contemporary in nature and using, on occasion, modern percussion instruments. Whether or not you have an interest in prehistoric musical instruments, this is a delightfully attractive recording.