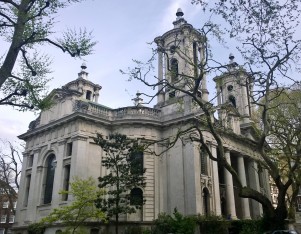 The St John’s, Smith Square Holy Week Festival (also reviewed here and here) concluded with a vocal workshop and lunchtime concert with Siglo de Oro and an evening concert from the New London Singers. The morning workshop was led by Patrick Allies, director of Siglo de Oro, and focussed on Bach’s motet Jesu meine freude, giving useful insights into the structure, text and musical contents of this most complex piece. Siglo de Oro’s lunchtime concert sandwiched this piece between two shorter meditative pieces by Purcell Hear my Prayer, and Remember not, Lord, our offences, concluding with Domenico Scarlatti’s Stabat Mater a 10.

This well-balanced and contrasted programme was impressively sung by the 10 singers of Siglo de Oro. As those in the workshop quickly realised, Jesu meine freude is not easy to sing, so it was telling hear this young professional singers excelling in all the trick bits. In the Scarlatti there was some particularly exposed and virtuosic singing from soprano Christine Buras and tenor Edward Woodhouse in Inflammatus et accensus and the final Amen. I was also impressed with the highest soprano, Helena Thomson who, as well as having a particularly clear voice, also had to start many of sections on her own.

I liked Patrick Allies’s restrained conducting, leaving the attention on the music and the singers, rather than the conductor. He also dealt well with the changes of pulse and momentum in the Bach and Scarlatti, and the intense Purcell moments.

The evening concert was by a choir new to me, the New London Singers. Their programme was outside the usual ‘early music’ theme of these Holy Week events, with pieces by MacMillan (2007), Tavener (1993 and 1995), Poulenc (1939), finishing with Duruflé’s sublime 1947 Requiem. The first two pieces were well-known, with MacMillan’s O Radiant Dawn followed by Tavener’s Song for Athene, the latter made famous by its appearance at the funeral of Diana, Princess of Wales. Both composers make effective use of what might be considered ‘early’ musical techniques, MacMillan with his use of little ornaments, Tavener with his drone bass and evocative Orthodox harmonies. His Svyati is perhaps less well-known, but was equally hypnotic with its vocal organum and low drone bass. It uses a cello to represent the Priest or Ikon of Christ, although on this occasion excessive finger vibrato caused havoc with pitch and intonation and with Tavener’s harmonic structure, notably towards the end when the cello’s audibly throbbing drone bass conflicted with the stable voices.

Duruflé’s Requiem featured some excellent organ playing by Ian Tindale, producing some impressively French sounds from the multi-purpose St John’s, Smith Square organ, sited in the rear gallery of the building as far from the choir as he could be. I assume there must have been a camera on the conductor, although I didn’t spot one, but Tindale’s timing was spot on. One of the greatest skills of cathedral, and other organist of remote organs, is having to play ahead of the beat so that the sound of the organ reaches the audience at the same time as that of the choir. It was a shame that Tindale wasn’t encouraged to come down to the stage to take deserved applause – a wave of the conductor’s hand up towards the gallery is not sufficient recognition.

Incidentally, Duruflé was a virtuoso organist and the score for the Requiem started life as a solo organ piece to which the largely plainchant vocal parts were added. Even those who haven’t had to learn the organ part would have realised that the organ part was a great deal more complex than the vocal writing.

I was very impressed with the cohesive and unaffected singing of the 30-strong and relatively young choir. The mezzo soloists in the Pie Jesu was Martha McLorinan, the conductor, Ivor Setterfield.