The penultimate concert in La Serenissima’s current series of ‘Grand Tour’ concerts at St John’s, Smith Square focussed on the music of Naples. A complex history of multiple occupations from the founding Greeks through to the 16th century Spanish (with brief Austrian and French incursions in the early 18th century) made it one of the most cosmopolitan (and the second largest) of all European cities in the later 17th and early 18th centuries. As such, it attracted artists and musicians of extraordinary ability. 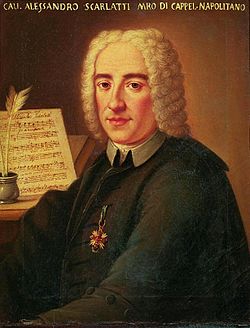 Alessandro Scarlatti (pictured) was one of the founders of the Naples opera scene. He first moved there in 1684, aged around 24, as Maestro di Cappella to the Spanish Viceroy, and spent much of his following life there. All the other composers in La Serenissima’s concert were influenced by him. He left little instrumental music alongside his operas, but one such was the Sinfonia di Concerto Grosso II in D (for recorder, trumpet, strings & continuo) that opened this concert. It can be a surprise to those not used to period instruments to realise that the trumpet and recorder can be combined as fellow solo instruments, as Bach demonstrated so well. Scarlatti was less adventurous in his combining of these instruments in this concerto, with the two instruments generally kept apart, and the two melodic Adagio movements only using the recorder. Unfortunately, on this occasion, in the passages where the two instruments were together, the trumpet was far too loud. Recorder player Tabea Debus is one of the most promising young musicians around, and her beautifully phrased and articulated melodic lines were a delight.

Francesco Durante was possibly one of Scarlatti’s pupils although he was the opposite in terms of compositional genre in not composing any operas. His Concerto VIII for strings & continuo in A was later given the nickname of La Pazzia (Madness), presumably because of the multi-sectional opening movement, with no fewer than 10 changes of pulse, alternating quixotic Allegros with rather bucolic Affettuoso sections. The instrumentation was unusual in the prominence given to the three violas. The evening finished with his Concerto II in G minor for strings & continuo, the jagged thrusts of the opening motif sounding rather like a gruesome murder scene.

There was a musical battle in Naples between the supporters of Durante and fellow composer Leonardo Leo. The latter spent his life in Naples, and became organist in the Viceroy’s chapel on Scarlatti’s death, finally become maestro di capella just nine months before his death. He was a more conservative composer than Durante and concentrated on matters of counterpoint rather than the expression that was the hallmark of Durante and his followers. He wrote one of the very few works for violin solo from Naples, in his case the Concerto for 4 violins in D, a rather lumpy piece which didn’t make full use of the four violins, not least because it lacked the solo opportunities from the four violinists. Much of the time was spent with them playing in thirds, in pairs.

The interval was surrounded by two works for a solo instrument, starting with Nicola Porpora’s Cello Concerto in G. Best known as the teacher of Farinelli and Haydn, he spent much of his time in Venice, alongside international travels, including to London. It is possible that his cello concerto was composed in London when he was composing operas in opposition to Handel. It was certainly intended for a virtuoso player, which Vladimir Waltham most certainly was, bringing an impressive musical depth to a work that was often rather predictable.

Another Neopolitan composer was Domenico Sarro. His Sonata XI for recorder, strings and continuo in A minor is an attractive work. Here Tabea Debus’s recorder was only set against two violins, viola, cello, bass and harpsichord, rather than the full orchestra of the opening Sinfonia. She was particularly effective at adding ornaments, and moulding them into the flow of the music, rather than as distinctive add-ons.

It is rather like writing about the village of Cheddar without mentioning cheese to have a concert of music from 17th century Naples without any vocal or operatic music. Although the quality of the playing was excellent, notably that of Tabea Debus and Vladimir Waltham, the compositions were not of a particularly high standard. Whether it was lack of well-known composers or the bitterly cold weather that kept people away, the audience was also rather slight. La Serenissima’s final concert in this Grand Tour series is on 15 February and features the better known composers Corelli, Tartini, Albinoni and Vivaldi.