Since 2013, Seconda Pratica has been involved with the Eemerging project (Emerging European Ensembles, part of the Creative Europe programme), a scheme that assists young early music ensembles. This recording is a part of their third year of support from Eemerging and the Ambronay European Baroque Academy. Like so many early music performers, Voces Suaves grew out of studies at that powerhouse of early music, the Schola Cantorum Basiliensis in Basle. It was founded in 2012 with 9 singers. The music features some of the perhaps lesser-known madrigal composers of the Renaissance, notably from the repertoire amongst the extraordinary artistic heritage the Este and Gonzaga courts in Ferrara and Mantua and in Florence.

Jean-François Lattarico’s detailed programme notes gives a good history of the madrigal and its development in the Italian courts.He notes Monteverdi’s assertion that ‘harmony becomes the servant of the words, and the words the mistress of the harmony’. He refers to this as the ‘Copernican revolution’ of music, during which composers ‘freed themselves from the hitherto exclusive ascendancy of religion by setting against the universal truth of dogma the no less real truth of human sentiments.’ 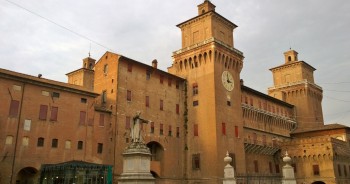 Visiting the monstrously imposing Este Castle that dominates the centre of Ferrara today (pictured), it is hard to believe that it was such a musical and artistic centre. On this recording, reference to Duke Alfonso II’s famed Concerto delle dame in the Ferrara court in the 1580s is made in the music of Lazzasco Luzzaschi, Giaches de Wert, Luca Marenzio as well as Monteverdi and Gesualdo, alongside the texts of Giovanni Battista Guarini, the father of one of the dames.

The nine singers of Voces Suaves produce a richly textured consort sound, with some fine solo contributions in a nicely-balanced programme of works, contrasted by two theorbo solos from Ori Harmelin.