The first of a two Sunday Barbican concerts focussing on the choral music of Sir James MacMillan took place on Saturday afternoon in the medieval church of St Giles Cripplegate, on the opposite side of the Barbican lakes from the main concert hall and theatre. It featured the London premiere of MacMillan’s Seven Angels, commissioned by the Birmingham based Ex Cathedra and its director Jeffrey Skidmore, and first performed in Birmingham last year. The piece stemmed from an informal discussion between MacMillan and Skidmore, both Elgar fans, on the uncompleted ‘Last Judgement’ conclusion of Elgar’s intended trilogy, which started with The Apostles and The Kingdom.

Although bearing no relation to Elgar’s surviving sketches, MacMillan took similar inspiration from the Book of Revelation, one of the most bizarre, disturbing, complex and apocalyptic of New Testament books, essentially prophesying the end of the world. In the Biblical text, the Seven Angels appear with their trumpets just after the opening of the Seven Seals, with half an hour’s silence separating the two scenarios.  One by one, the seven angels blow their trumpets (in MacMillan’s interpretation, using modern and early valveless trumpets as well as two shofars, the ancient Jewish ritual rams horn instrument), each blast following by one of God’s periodic bouts of destruction of a third of things like trees, green grass, fish, ships, the moon and stars and, ultimately, a third of mankind. The final trumpet heralds the “new heaven and new earth”. The passages from Revelations set by MacMillan (from chapters 8, 9 11 and 21) end with the words “I am the Alpha and the Omega, the beginning and the end”. 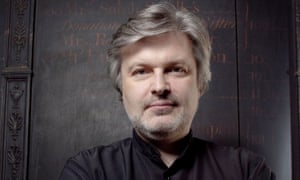 In addition to the two trumpet players, MacMillan (pictured) uses harp, virtuosic cello and a complex package of percussion instruments, on this occasion played respectively by Mark Bennett and Simon Munday, Lucy Wakeford, Andrew Skidmore and Simone Rebello. Not surprisingly, given the text, the music is dramatic and full of extraordinary musical effects for singers and instruments. Four vocal soloists, drawn from the double choir, announce the seven angels, to varying accompaniments. The chorus vocal effects include slithering around notes and across the vocal range, tonguing sounds to represent locusts (scored in the Quantz ‘dtdtdt’ woodwind tonguing format), humming, shouts and whistles.

With a vast range of musical effects, there were some specific highlights, one being the scene with the fourth angel and a lovely soprano solo (from Katie Thretheway) and harp expressing the darkening of the sky, following by a subdued choral passage reflecting an eagle crying “Woe to those that dwell on the earth”. Another was the jazz-like riff before the seventh angel. MacMillan’s use of the small instrumental forces was remarkable, notable with some powerful writing for solo cello and impressive use of percussion colours, ranging from tiny Hare Krishna bells to a large gong and bass drum.

To complete the hour long concert, Ex Cathedra went to the opposite end of the Bible with Aaron Copland’s 1947 ‘In the beginning’, settings the first 38 verses of Genesis from the creation of heaven and earth to the creation of man. Using the frequently repeated words and phrases as points of reference, Copland 20 minute piece used and 8-part a cappella choir and mezzo soloist, here sung with impressive conviction and clarity by Martha McLorinan.

The Ex Cathedra choir, their soloists and instrumentalists were on excellent form, as was Jeffry Skidmore’s impressive direction of this complex pair of works. An evening concert in the Barbican Hall featured the world premiere of MacMillan’s Stabat mater.