This CD has a touching poignancy in that it was the last recording made by the distinguished conductor and organist John Scott, who died at a tragically young age in August 2015. It was recorded in April and went to press a few days before John’s death, so has no reference to his death in the notes. An enormously influential musician and man, John Scott was organist and director of music at London’s St Paul’s Cathedral for 14 years before moving to New York to direct the choir and music of Saint Thomas, Fifth Avenue, one of the finest Anglican men and boys choirs outside of the UK.

It is perhaps appropriate that this recording is of Christmas music from John’s home country, centred on Benjamin Britten’s Ceremony of Carols, a work that Britten started composing in 1942 on his journey back to England after three years in the United States. It is followed by his New Year Carol from the collection Friday Afternoons, written for the boys of his brother’s preparatory school. Both pieces demonstrate Britten’s extraordinary ability to write for boys’ voices without the slightest hint of condescending or patronising, treating them as consummate musicians in their own right – something that John Scott very clearly believed in.

The other major work is John Rutter’s Dancing Day, composed in 1973 as a companion piece (or alternative) to Britten’s popular Ceremony of Carols. Also written f

or harp and boys voices, it starts, like the Britten, with a harp solo, played here by Sara Cutler. Unlike Britten’s self-composed melodies, Rutter arranged traditional Christmas melodies, including the Coventry Carol on account of the first performance being in Coventry Cathedral. The shorter pieces that make up the rest of the CD range from Patrick Hadley’s 1936 I sing of a maiden to William Mathias’s concluding 2010 Wassail Carol, a lively motet with a major contribution from the organ (the latter in particular demonstrating the high recording quality of the CD). There is also John Scott’s own arrangement of the traditional carol King Jesus hath a garden, written while he was organ scholar at St John’s College, Cambridge.

The 24 boys and 14 men of the Saint Thomas choir produce a magnificent sound, with that exquisite combination of musical 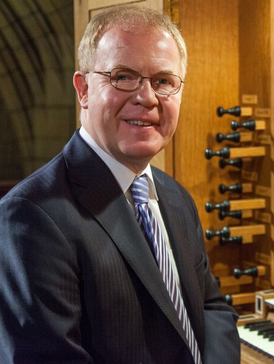 precision, strength and insight that so typifies John Scott’s approach to music, and to fellow musicians. Nine of the boys have solo spots, all sung to perfection in that almost unexplainably pure, innocent and harmonically complex sound of a boy’s voice. The perfect intonation, enunciation and control of consonants are all examples of John Scott’s meticulous approach to music.

This recording has already won many accolades. If you are reading this too late to make it a Christmas gift for somebody, buy it for yourself, not least as an abiding memory of a fine musician and man.