Although perhaps not quite reaching the social cachet of Glyndebourne or Garsington, the opera season at Iford Manor is always a delight, both for the setting and the standard of the music. A few miles south-east of Bath, the manor house is surrounded by the famous Peto garden, with an Italian cloister that is turned into a delightfully intimate opera house for the season. Unlike their companion’s ‘posh frocks and picnic’ focussed events, the dress code is ‘smart casual’ and picnicking opportunities come before, rather than during the opera, with a welcome coffee and biscuits filling the 20 minute interval. All this encourages a welcome focus on the music, rather than the surrounding social razzmatazz.

This year’s early music opera was Handel’s wonderful Agrippina, one of his most approachable operas despite, or perhaps because of, having been written when Handel was around 24, at the end of his enormously productive three years in Italy. This period produced some of his finest music, as reflected in the fact that Agrippina borrows extensively from Handel’s previous works – and, in turn, many extracts were later borrowed for later works.

Iford’s production is directed by Bruno Ravella, with designs by Kimm Kovac. The action is set in a splendidly overblown version of all that was horrible about the 1980s, not least the Joan Collins character Alexis in Dynasty, here morphed into the fiercely ambitious and ruthless Agrippina. In reality, Agrippina was related to the 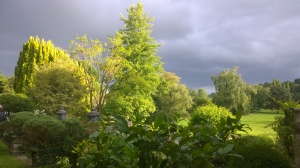 Emperors Augustus, Tiberius, Caligula, and Claudius as well as being the fourth wife of the latter (her Uncle) and, to top it all, the mother of the appalling Nero. Her side kicks Pallante and Narciso were portrayed as a sleazily seductive and sharp-suited banker (wearing the sorts of braces that I have probably still got in the bottom of a drawer somewhere) and a thrustingly cocksure TV presenter (wearing a blue suit with brown shoes). Nerone starts out as a cross between a floppy haired Bohemian-chic Goth and Harry Enfield’s Kevin before his own ambition starts kicking in. Poppea is a scantily-clad sex-goddess in leopard-skin tights. The hero of the evening is Ottone, at least as far as ethics is concerned. He was kitted out, appropriately, in a white uniform. Lesbus was a bit of a hippy seemingly left over from a decade or so before the ‘80s.

Agrippina is one of the most powerful female roles in Handelian opera, and Alinka Kozári explored the complexities of her character with extraordinary insight, even if her agile and expressive singing voice featured slightly too much vibrato for my taste and for the authenticity police. Ciara Hendrick’s portrayal of Nerone was outstanding, both for her acting and singing ability. Unfortunately, judging by overheard interval conversations, not everybody had fully grasped the trouser-role concept of Handelian opera, giving to them at least, an added twist to Nerone’s relationship with Poppea. The hero Ottono found an excellent proponent in Rupert Enticknap, the emotional complexities of his predicament being worked through the sort of facial twists and turns that can only be seen in an intimate setting like Iford, when the singers are just feet away from the audience. It must be an extraordinary experience for these relatively youthfully singers to perform in such a space. Ottono eventually gets the girl (Poppea), although anybody who knows their history (even if only revealed through other operas about this dysfunctional dynasty) will know how it turns out. Ditto with Poppea and Nerone, of course.

The developing puzzlement of Claudio, Agrippina’s unfortunate husband, was well expressed by Andrew Slater, the conflict between statesman-like Emperor and confused husband coming over well. Having the entire audience wave little flags (post 1946 Italian ones) at his triumphant entry might be more of an Iford than a Glyndebourne thing, but people seemed to enjoy their bit of involvement. Louise Kemeny must have loved creating the role of Poppea, not least for the dressing up opportunities.

Musical direction was by Christopher Bucknall, a newcomer to Iford. His involvement and collaboration with the singers was very apparent, and he also conducted the small group of excellent period instrumentalists (under the general title of the Iford Festival Baroque Orchestra) to great effect, balancing the need to keep speeds relatively brisk whilst allowing the singers their moments of repose. Outstanding instrumental contributions came with Hannah McLaughlin’s prominent oboe part and leader Bojan Čičič, with his inventive violin twiddles. Jonathan Rees and Inga Klaucke had the key continuo roles on cello and bassoon. The English translation (by Christopher Cowell) was very effective, with some nice lines – for example, “Don’t cry for me Agrippina”. As should be the case with all opera, whatever the production take and values, it is the music and standard of singing and playing that makes or breaks it – and this was excellent on both counts.