The New Music Biennial festival weekend in Londons’ Southbank Centre (and the following weekend in Hull) features 20 new commissions, together with other pieces composed within the last 15 years. The new works are each around 15 minutes long and are repeated after an on-stage chat with one of the BBC Radio 3 presenters. All the pieces will be broadcast on Radio 3 on their New Music Show or during the weekday 2pm Afternoon Concert slot. It is presented in conjunction with the PRS for Music Foundation and the BBC. The first of the new compositions to be performed was gleann ciùin by Claire M Singer, a composer who has used her time in charge of the magnificent 1877 Henry Willis organ in Islington’s Union Chapel to set up the annual Organ Reframed festival and to explore the more unusual sound possibilities of a mechanical action pipe organ. The occasion was also a rare outing for the Queen Elizabeth Hall’s recently restored 1966 Flentrop organ. It generally lives in a basement below the stage with a lift to hoist it up to the stage when needed – many people do not even know it is there.

END_OF_DOCUMENT_TOKEN_TO_BE_REPLACED

It was an achievement that this concert took place at all. Giacinto Scelsi’s Uaxuctum is one of the most complicated orchestral works to perform. Although composed in 1969, nobody attempted to perform in until 1987. This was its UK premiere. The score includes four amplified solo singers and a chorus singing the most complex microtonal music in up to twelve parts. The large orchestra includes a solo ondes-martenot, vibraphone, clarinets, horns, trumpets, trombones, bass and double bass tubas, and timpani. A battery of other percussionists play instruments such as a two-hundred litre. The subtitle of Uaxuctum is ‘The Legend of the Maya City, destroyed by themselves for religious reasons’, and the music evokes that atmosphere of despair that led to the apparent self-destruction, around 900 CE, of this Mayan city (in what is now Guatemala) after a few centuries of varying fortunes since their conquest in the 4th century, . Its five movements move from evocative mysticism to violent outbursts in an arch form, the final movement reflective of the first. It last just over 20 minutes.  END_OF_DOCUMENT_TOKEN_TO_BE_REPLACED

The new-look, or should I say the new-hear Spitalfields Music Festival continued with In the Light of Air, the title of the main piece of the evening, by Anna Thorvaldsottir. It was preceded by a sequence of works by the American founder of ‘Deep Listening’, Pauline Oliveros from her Anthology of Text Scores. The theme was mindfulness and meditative, with the audience encouraged to join in and respond to the music. Most of the pews had been removed, leaving the instrumentalists in the centre of an open space. END_OF_DOCUMENT_TOKEN_TO_BE_REPLACED 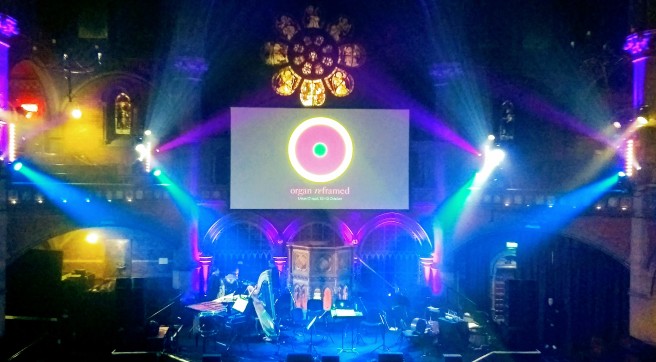 Organ recitals, at least of the traditional English sort, tend to attract relatively small, rather aged, and predominantly male audiences. They usually feature music written between the time of Bach and the early 20th century. Occasionally forays into more contemporary (or contemporary sounding) music – even Messiaen, most of whose organ music was composed more than 70 years ago, can frighten off audiences. But the weekend Organ Reframed festival at the spectacular Union Chapel in Islington demonstrated that both organ and contemporary music can have a huge following, if presented in an imaginative way. END_OF_DOCUMENT_TOKEN_TO_BE_REPLACED