The New Music Biennial festival weekend in Londons’ Southbank Centre (and the following weekend in Hull) features 20 new commissions, together with other pieces composed within the last 15 years. The new works are each around 15 minutes long and are repeated after an on-stage chat with one of the BBC Radio 3 presenters. All the pieces will be broadcast on Radio 3 on their New Music Show or during the weekday 2pm Afternoon Concert slot. It is presented in conjunction with the PRS for Music Foundation and the BBC. The first of the new compositions to be performed was gleann ciùin by Claire M Singer, a composer who has used her time in charge of the magnificent 1877 Henry Willis organ in Islington’s Union Chapel to set up the annual Organ Reframed festival and to explore the more unusual sound possibilities of a mechanical action pipe organ. The occasion was also a rare outing for the Queen Elizabeth Hall’s recently restored 1966 Flentrop organ. It generally lives in a basement below the stage with a lift to hoist it up to the stage when needed – many people do not even know it is there.

Clare M Singer’s new composition, gleann ciùin (The Quiet Glen) creates a wonderful kaleidoscope of sounds by manipulating the organ’s stop action to vary the wind pressure entering the pipes, producing an extraordinary range of timbres and effects as the stops slowly come into speech, changing in tone and pitch as the wind enters the pipes, the beats between the out-of-tune setting up a myriad of internal rhythms.

In musical structure, gleann ciùin is an enormous crescendo, starting from as near to absolute silence as you can get in a concert hall with a smoke machine. With some notes on the two keyboards held down, and a pedal note depressed, the tiniest of sounds became audible as one of the stops was very slowly pulled out. For about 6 minutes, the only sound came from the organ, as wind was slowly released into the pipes, working upwards from the lowest pipes, and creating ever-shifting phase-alteration and melodic and rhythmic patterns that seemed to disappear almost as soon as they had emerged. Four cellos, two violins and two horns from the London Contemporary Orchestra then joined in, seemingly adjusting their own notes and textures to what they were hearing from the organ. 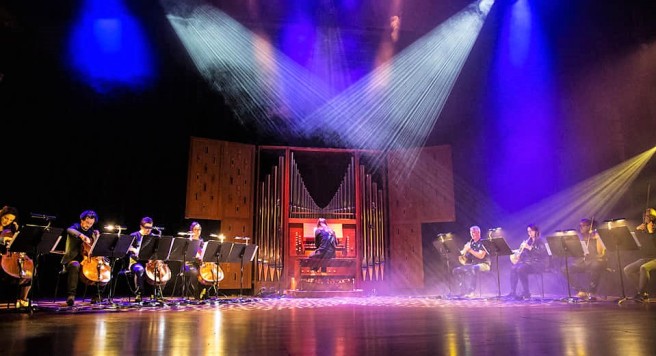 During the early part of the crescendo, slow-moving organ chords gave a sense of structure. This was later replaced by a sequence of slow, low pedal notes as the crescendo continued to build in volume and texture to peak at about 10 minutes. The sound and timbre then declined before a solo cello cadenza-like passage gave the only specific melodic element, albeit one so slow as to be almost unrecognisable as a melody. It was interesting that in the repeat performance, the input from the other instruments was noticeably different than in the first, reinforcing my impression that the players were responding to the sounds that they heard from the organ which, by their very nature, would vary every time and very obviously involved the eight members of the London Contemporary Orchestra in the creation of the composition. 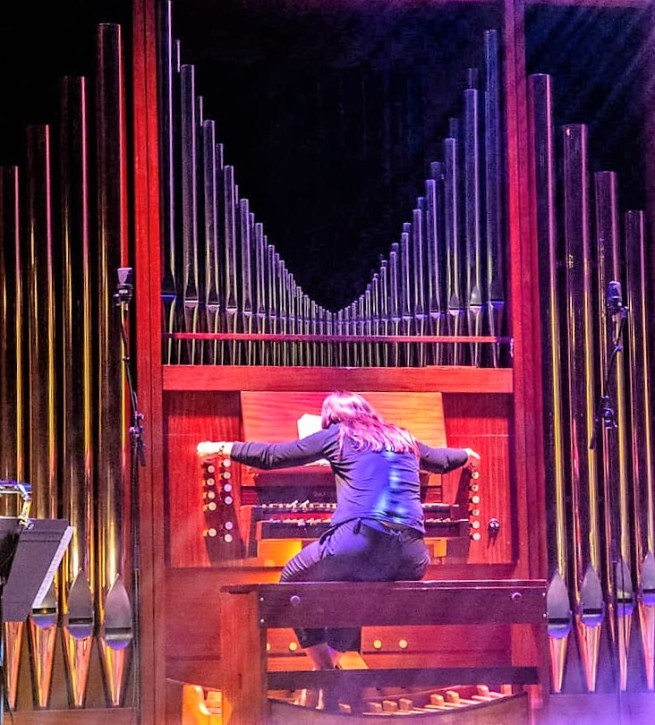 For most of the second half, Clare Singer’s hands were only on the stops, with just her feet and the held-down notes on the two manuals of the organ sounding the notes. The picture above shows the point at which the decrescendo begins, as the stops are gradually pushed in, starting from the highest stops on the two manuals.

Although, as a conventional organist who plays mechanical actions organs (rather than any organ with an action that does not directly control the supply of wind to the pipes without the intervention of electrical switches) for reasons of historical integrity and the sheer musical joy of being able to influence the sound of the organ through touch and articulation, I might be expected to reject this approach to organ ‘playing’. But, to me, as well as possibly saving the hassle of having to learn lots of notes, it reinforces the notion that the historic organ is, in essence, a very expensive and complex synthesizer with roots many hundreds of years before our current computer technology. Indeed, the names, and the sounds, of most present-day organ stops are intended to reflect Medieval and Renaissance instruments.

Clare’s imaginative use of this most versatile of wind instruments merely enhances its historical position and brings into the public domain something that I have only ever dared to try for myself in the privacy of a locked church when I should be rehearsing. The exposure of the classical organ to a much wider public than the usual organ-recital audience is to be very welcomed.