Hypermnestre is a tragédie en musique by the almost totally forgotten French composer Charles-Hubert Gervais (1671-1744). It was first performed in 1716 at the Paris Opera (the Académie Royale de Musique) and was followed by several revivals. It sets a libretto by Joseph de Lafont based on the myth of Hypermnestra, one of the 50 daughters of Danaüs (Danaus), King of Argos. Danao had been told by an oracle that he will be murdered by one of his nephews. But he had 50 of them, courtesy of his brother, King of Egypt, so decided to marry all 50 of his daughters off to their cousins, with instructions to kill their new husbands on their wedding night. That they do, with the exception of Hypermnestre who refuses to kill Lyncée because he had respected her request to remain a virgin. The plot is similar to Francesco Cavalli’s much earlier Hipermestra, was performed at Glyndebourne in 2017 (review here).  END_OF_DOCUMENT_TOKEN_TO_BE_REPLACED

For many years the only way to hear French Baroque music performed with any degree of authenticity was by listening to French performers. Although that is still the case to an extent, the level of understanding of French performing techniques has become far better known throughout the world. One example is the series of recordings from Budapest from the Orfeo Orchestra and Purcell Choir under their founder and director György Vashegyi. I reviewed their CD of Mondonville’s Grands Motets here, and their performance of Rameau’s Naïs in Budapest here, and now turn to their more recent recording of his opera Isbé.  END_OF_DOCUMENT_TOKEN_TO_BE_REPLACED 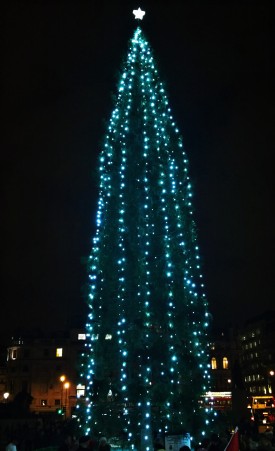 Over the years, William Christie has done much to introduce French baroque music to British ears, and has opened our ears to Purcell. But I had not heard his take on Messiah live before. It was bound to be rather different from the usual variety of British interpretations, and it was. We are increasingly used to lightly scored performances with moderately sized choirs, in contrast to the cast of thousands of yesteryear, but this very Gallic interpretation added a layer of delicacy and dance-like joie de vivre to Handel’s music, all done in the best possible Bon Goût. Les Arts Florissants fielded a choir of 24 (quite large, by some standards today, and in Handel’s time) and an orchestra with 6, 6, 4, 4, 2 strings, together with five soloists. Both instrumentalists and the chorus were encouraged to keep the volume down, usually by a finger on the Christie lips. This seems to be in line with Handel’s intentions, as indicated by his scoring and, for example, his very limited use of the trumpets. When things did let rip, there was still a sense of restraint amongst the power. END_OF_DOCUMENT_TOKEN_TO_BE_REPLACED

However many times I hear Bach’s B minor Mass, I never stopped being amazed at its compositional history. Almost certainly never heard during his lifetime, and with many of the sections lifted from earlier compositions, it was cobbled together over many years, the first part with the aim of securing a royal appointment in the Saxony Court. Despite all that it is one of the most, and arguably, the most extraordinary piece of music ever composed.   So it was no surprise that more than 5,00o people wanted to hear its performance at the BBC Proms in the Albert Hall.

And therein lay the problem. How to perform a work, intended to be performed in an (albeit sizeable) church by the normal Baroque orchestral and choral forces, in a vast auditorium designed (if indeed it was designed for anything) for enormous forces. Nowadays most period instrument groups makes few concessions to the space and acoustics, and play the music in the way they normally do. This is what William Christie did, with a 24-strong choir and a typical Bach orchestra. This will not produce a sound to fill the hall. But it will produce a sound that Bach might recognise. And for me, that is the key thing. Prommers are, by and large, pretty intelligent people, so should be used to letting their ears adjust to the relatively subdued volume. END_OF_DOCUMENT_TOKEN_TO_BE_REPLACED

As part of their ‘Proms at …’’ season, the BBC decanted from its usual home in the Royal Albert Hall to one of the most intimate performances spaces in London, the Sam Wanamaker Playhouse, part of the Shakespeare’s Globe complex on the South Bank. Since its opening in 2014, this reconstruction of a typical Jacobean (early 17th century) theatre has housed a number of excellent (and sold-out) musical events and small-scale operas, adding considerably to the range of London music venues. Sadly, under 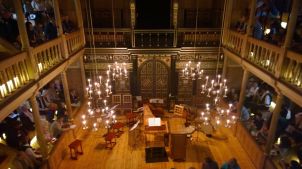 the new Globe management, those events seems to have ground to a halt, with only one listed in the current season – and that a hang-over booking from the previous management. So it was fortuitous that the BBC Proms chose the theatre for one of its ‘BBC at …’ events (alongside such venues as a multi-story car park in Peckham), not least because it enabled people to see the inside of this fabulous, but very uncomfortable, theatre for just £14, rather than the up to £62 the Globe are asking for their own next concert there. END_OF_DOCUMENT_TOKEN_TO_BE_REPLACED

The Orchestra of the Age of Enlightenment continued their collaboration with The Globe’s new Sam Wanamaker Playhouse with an imaginative performance of Matthew Locke’s music for the 1674 production of The Tempest (or Enchanted Island), devised and directed by Elizabeth Kenny with stage direction and text adaptation by Caroline Williams. Following the Musica Brittannica edition, the music included additional pieces by Pelham Humphrey, Reggio, Banister, Purcell and Hart. The five OAE instrumentalists were joined by three singers, two boy trebles together with two actors who cleverly acted all the parts in the extracts from the rather curious version of Shakespeare’s play for which Locke provided the music. Despite the oddities of the text, this Tempest was extraordinarily popular at the time, with frequent revivals over the following 150 years. Although 21st century eyes and ears might not rate the play quite so highly, setting Locke’s relatively well-known music in the context of at least part of the spoken text and stage action does help with understanding the context of music like this. Along with Purcell’s examples, this repertoire is difficult to slot into the mainstream European musical tradition of the late 17th century. The Wanamaker Playhouse is a gloriously intimate space for such performances, the candle lighting added much to the atmosphere. This was a lively and, at times, very funny production, not least when one of the actors portrayed a sword fight by playing both characters at the same time. The impressive singers were Katherine Watson, Frazer B Scott and Samuel Boden.