END_OF_DOCUMENT_TOKEN_TO_BE_REPLACED

This recording showcases soprano Véronique Gens in the form of a five Act “opera imaginaire”, based on the repertoire of two of the greatest divas of the 17th-century Paris Opera: Mlle Saint-Christoph (her first name is not known) and her successor Marie Le Rochois. They both dominated the Paris opera scene between 1675 and 1698. Concentrating principally on the music of Jean-Baptiste Lully, we also hear music from operas by Marc-Antoine Charpentier, Henry Desmarets, and Pascal Collasse, with extracts from Lully’s Amadis, Proserpine, Atys, Armide, Persée, Alceste, and Le Triomphe de l’Amour, together with Charpentier’s Médée, depicting heroines such as Alceste, Armide and Médée, and the deities Juno, Ceres and Aeolia.

END_OF_DOCUMENT_TOKEN_TO_BE_REPLACED

Eavesdropping on a birthday party can be fun, even if you sometimes wish it wouldn’t go on for quite so long. This one did, apparently finishing around 10.30, although I had to leave before 10 to catch my last train home. In celebration of their proud 40-year history, Les Arts Florissants are touring a mixed programme of Handel, Purcell and the French composers Charpentier, d’Ambruis, Lully and Rameau. Under their founding Director William Christie and  Associate Musical Director Paul Agnew, five soloists, a large orchestra and 23-strong choir demonstrated just why they have been so important over the past 40 years. Like any good party, it is perhaps best to leave what happened in the room, in the room, so I will not attempt a critical review – which is probably just as well because I am not sure that I could think of anything critical to say. END_OF_DOCUMENT_TOKEN_TO_BE_REPLACED

In a refreshing change from the usual Christmas music offering, the Solomon’s Knot Collective took us to 17th-century Paris for two of the pieces that Marc-Antoine Charpentier composed for the Christmas season. The 1685 Pastorale sur la naissance de Notre Seigneur Jésus-Christ was composed for Marie de Lorraine, Duchesse de Guise, also known as Mademoiselle de Guise. She was Charpentier’s principal patron. It was performed in the chapel of the Guise family’s Paris home, the Hôtel de Guise, and included several household staff as singers or instrumentalists, with Charpentier himself sang haute-contra. A mini-opera in scope and structure, the piece includes a reference to the death a few years earlier of the Duchesse’s nephew, the 5-year old heir to her line of the Guise family, as well as a shepherdess’s touching elegy on the death of her favourite sheep.

END_OF_DOCUMENT_TOKEN_TO_BE_REPLACED

Following the mostly secular early evening concert by the Choir of Royal Holloway (reviewed here), the St John’s, Smith Square Holy Week Festival continued with a more sacred, although not entirely Holy Week based, concert by the Birmingham based choir Ex Cathedra. The first part of the rather complex three-part title of the event comes from the title of Giovanni Anerio’s 1619 Teatro armonico spirituale di madrigal (Harmonic Theatre of Spiritual Madrigals). 14 of the 62 pieces are in the form of dialogues, and two examples opened each half of the concert, Rispondi, Abramo, setting the story of Abraham and Isaac to music and Sedea lasso Gesù, reflecting the story of Jesus and the Samaritan woman at the well.

The latter part of the concert title reflected the early days of the development of the early Baroque oratorio, inspired by the Roman Oratory of Filippo Neri, and consisting of semi-theatrical presentations of Bible stories through the musical use of recitative and arias with continuo accompaniment. As well as the Anerio’s examples, each half of the concert ended with large-scale oratorios by Charpentier (Le reniement de St Pierre) and Carissimi (Jepthe). Inserted between these early oratorios were two groups of the sometimes very secular Monteverdi madrigals ‘made spiritual’ by Aquilino Coppini, published between 1607-9 a few years after the original publications of Monteverdi’s madrigal Books IV and V. A close friend of Monteverdi, Coppini wrote that he saw in Monteverdi’s music “… a wonderful power to move the passions exceedingly”. His alteration of the texts is extremely well done, matching Monteverdi’s original use of vowel sounds and textural accents.

The unforced tone of the ten singers of Ex Cathedra was attractive, although it occasionally came over as a little reticent, notably in the chorus sections. There were some excellent individual contributions. particularly from soprano Angela Hicks, the unaffected clarity of her voice and her impressive use of ornaments proving ideal in her portrayals of the boy Isacco in Rispondi, Abramo, the Samaritan woman in Sedea lasso Gesù and as soloist in the Monteverdi/Coppini Ure me, Somine. Tenor Declan Costello was a gentle Jesus in the Charpentier oratorio on the denial of Peter, while Greg Skidmore provided a solid bass in Charpentier’s Narrator and in Jephte.

Katie Tretheway portrayed the unfortunate daughter of Jephte, notably in the concluding lament as she bewails her virginity prior, so she thought, to becoming a burnt offering to God. In her virginal circumstances, and given her concerns, I can think of more interesting ways of spending your last two months on earth. Carissimi doesn’t even give her the biblical redemption in his oratorio, so the evening finished with the weeping children of Israel.

This concert was recorded by BBC Radio 3 for an unspecified future broadcast.

The viol consort repertoire took a long time to lie down and die. From its prime in the early years of the 17th century, its decline took different forms in different countries. Most countries retained the bass viol as a continuo instrument, with France (and, to a certain extent, Germany) developing a repertoire for solo bass viol. Italy had long since concentrated on the violin rather than the viol family. In England it was Purcell who briefly rescued the viol consort from its death throes with his remarkable late-flowering Fantasias c1680. But there were also other late-flowerings in France and Italy from the likes of Charpentier, Forqueray and Legrenzi.

In their Kings Place concert, the viol consort Fretwork explored some of these late examples of viol consort music in their programme ‘Passacaille’, the concert title giving a clue as to the nature of several of the pieces. They also ‘borrowed’ the music of Bach and Handel to add another theme their programme. They opened with Bach and a transcription of the central part of his Pièce d’Orgue (Fantasia in G minor: BWV572) END_OF_DOCUMENT_TOKEN_TO_BE_REPLACED

The evening started with Jean-François Dandrieu, a composer well-known to organists for his lively Noël variations, but otherwise overlooked in favour of the likes of Rameau and Couperin. The delightful Trio Sonata in D from his 1706 Livres de Sonates en trio demonstrated Italian influence, not least in its use of counterpoint and the Corellian walking bass in the opening Largo, and its vivacious concluding Presto. A true trio, with Joseph Crouch’s cello (or, in this case, perhaps more correctly END_OF_DOCUMENT_TOKEN_TO_BE_REPLACED 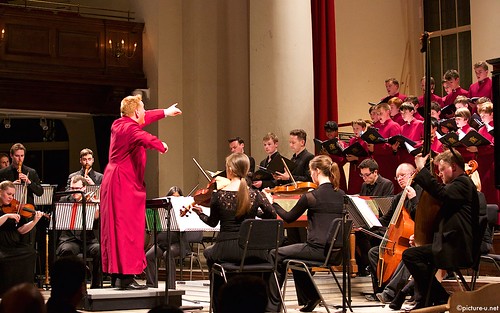