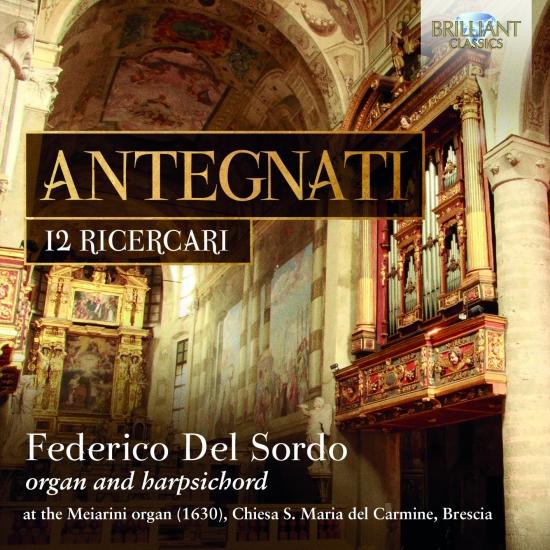 Costanzo Antegnati (1549-1624) is the best-known of a family of distinguished organ builders in Northern Italy that lasted from the early 15th to the late 17th-century. He worked with his father on the 1582 organ in San Giuseppe, Brescia, at one time, one of the most famous in the world. Costanzo was organist at the Brescia cathedral from 1584 to 1619. The most famous of his few surviving organs (from 1588) is in the church of St. Nicholas in Almenno San Salvatore, Bergamo. His 1595 treatise L’arte organica was republished in 1608 with these 12 Ricercars added to the technical details of 144 organs built by his family, information on organ tuning and advice on registration.

The word Ricercar was a flexible one in Renaissance times. It is based on the Italian for ‘search out’ and, in the context of Antegnati’s examples, is a forerunner of the fugue with its imitative writing ‘searching’ out the different permutations of a generally rather stately theme. Antegnati also includes elements of the free improvisatory style of the fledgeling Toccata form and the instrumental form of ‘divisions’, meaning elaborations or ornamentation on the musical text.

In this recording, released in 2018, Federico del Sordo contrasts the rather formal Ricercari with pieces by other composers of the time, notably the three Canzonas that are the only surviving pieces by Anton Holzner (C1599-1635), organist in the Munich Court of Maximilian I. who spent time in Italy, perhaps meeting Frescobaldi. Other pieces are Ercole Pasquini’s Toccata del settimo tone, Vincenzo Pellegrini’s Canzon La serpentine and Agostino Soderini’s Canzon la ducalina. The differing styles of these typical late Renaissance pieces (Ricercare, Toccata and Canzon) are the foundation of keyboard music to the present day.

Federico del Sordo’s playing is entirely appropriate to the historic style and the nature of the contrasting moods of the pieces. The ornamentation and organ registrations are clearly based on examples from the period and, of course, Antegnati’s own advice.

My only issue is that the recording falls into the frequent trap when using different instruments of getting the balance wrong. The organ is well recorded, but the acoustic jump at the first harpsichord piece is a bit extreme. and the clavichord is set at far too high a recording level in comparison to the other two instruments. Apart from anything, this exposes the mechanical thumps of the keybed.  I would have preferred the whole CD to have been recorded on the fine organ. Of course, recording it on Antegnati’s own organ in Almenno San Salvatore would have been an added bonus, but I assume there were practical reasons why that didn’t happen.