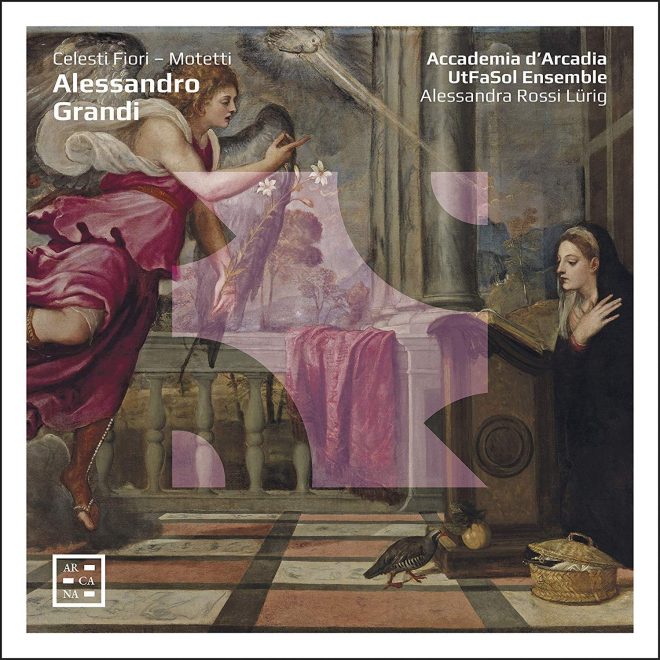 Alessandro Grandi (1590-1630) was Monteverdi’s deputy in Saint Mark’s Basilica in Venice and was prominent in the development of Venetian style of the early seventeenth century. He was considered by his contemporaries to be supremely talented, an equal to Monteverdi, but he hasn’t survived the transfer to posterity very well and is little known today. This CD of motets published between 1610 and 1630 is the first complete recording dedicated to Grandi. The title Celesti fiori (Celestial Flowers), comes from his Libro Quinto de suoi Concerti, published in Venice in 1619.

The 15 motets on the recording are taken from eight of his collections of music, with a focus on the first, second and fourth books of motets. Although not presented in chronological order, it is possible to trace the development of Grandi’s style from his early Gabrieli-influence pieces, some composed while he was living in Ferrara. His more back to Venice in 1617 reveals a move to the emerging concertato and seconda practice concertato style, notably in his setting of the text in an emotionally intense manner. A contemporary wrote of his music that “the clarity of the words is not impaired by the fugues of the composer, nor does the art of speaking lose any of its worth through the art of song,; instead it is elevated by it”.

The ten singers of the recently founded Accademia d’Arcadia, with their own organ and theorbo player, are joined by the two cornetti and three sackbuts of the UtFaSol Ensemble, the whole conducted by Alessandra Rossi Lürig. The motets are all sung one to a part so, with one exception, no more than four singers are heard at one time. The exception is the concluding double choir Nisi Dominus. The singing reflects the passionate nature of the texts, with appropriately added ornaments. Only occasional is the exposure of one to a part apparent, the sopranos sometimes letting their natural vibrato have a little too much freedom.

It was recorded in the Basilica di Santa Barbara in Mantua, where Monteverdi worked, and the acoustics are very effective. The echo passages in Heru mihi are particularly effective. The programme notes give a useful background to this little-known composer and his music, very little of which appears in modern editions. More information, and a link to the CD booklet, can be found here.

In the present coronavirus situation, it is perhaps mentioning the Grandi and his entire family died in Bargamo 1630 after being exposed to the plague in Venice.