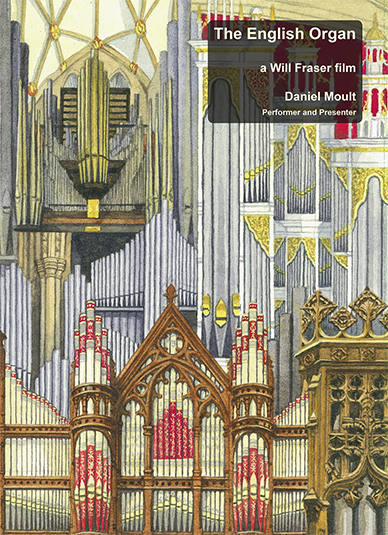 This extraordinary project is the result of a year-long tour of forty locations in England, the USA, New Zealand and Australia. The package includes four DVDs and three CDs, amounting to around ten hours of music from the early 16th century to the present day, together with an illustrated booklet with track listings and the specifications of all the organs. They are described and played by Daniel Moult, who also provides the commentary on the first DVD, which is a documentary in three 70′ parts on the development of the English organ. The following three DVDs and the three CDs provide further musical examples and, on the DVDs, further demonstrations of all the featured organs.

The documentary and the musical examples are divided into three chronological sections – The Long Beginning c1500 to 1855, The Victorian Boom 1855 to 1904, and Modernity and Nostalgia 1908 to 2017. Listeners will have their own preference, both for repertoire and organs of each period. I would have preferred The Long Beginning to end at the start of Queen Victoria’s reign in 1837, rather than 1855, if only to move the likes of the monumental 1855 organ in St George’s Hall, Liverpool into to the Victorian Boom section and perhaps allow a couple more examples from the important earlier period of English organ building.

Daniel Moult is the Director of Organ Studies at the Royal Birmingham Conservatoire and a distinguished educator and performer. Manchester-born, he studied at Oxford University and the Amsterdam Conservatorium, his training at the latter being particularly evident in his style of playing, notably in the earlier repertoire. He is a persuasive communicator with an endearing manner of speaking. His approach to the organ demonstrations on the DVDs is relaxed and informative and includes shots of him wandering around inside the often cramped guts of several organs. He seems to have spent the entire year wearing a black suit and black shirt, the ensemble only enlivened by the occasional peep of delicately coloured socks. His organ shoes feature in several shots but are not the most attractive of their type.

The music played to demonstrate the stops of the organs is mostly, and very effectively, improvised. The more formal performances on the DVDs and the three CDs are technically and musically exemplary. If you are an organ student or player, they are well worth watching on the DVDs  In the earlier repertoire, do note Daniel Moult’s use of early fingering, his sensitive touch and release of notes, his hand position (playing on the tips of his fingers) and his use of articulation to bring life to musical lines. And do admire his enviable technical ability to play the most complex of pieces with the apparent ease that only comes from years of practice. I only spotted one tiny slip, and that was only because it was corrected mid-note.

The choice of repertoire is appropriate. Many organists will approve of the preference for organs at full blast, although we do get examples of the quieter sounds. My only slight quibble is in the pieces chosen for the first, and “earliest” organ – which is actually a 2001 reconstruction based on remnants of an organ although he wasn’t born at the time of the original organ. Music from the time of the original organ is only played in the demonstrations, rather than in the more formal performance. I would have liked to have heard more Redford and at least some Preston and Tallis.

There are very occasional confusions between what is seen and what is heard, and what is being played on what is not always clear in the DVDs. An example is at the beginning of the documentary (and repeated at the end) when a discussion about Salisbury Cathedral, with it hovering in the background, is illustrated by music from Truro Cathedral. The reason soon became apparent, and it was a delight to hear the only vocal contribution to the entire enterprise, the all-girl treble singers of the Truro Cathedral Choir. The 1851 Great Exhibition organ in St Anne’s Limehouse is demonstrated on DVD without being named until the very end. It would also have been useful to have included the dates of the composers, as well as the organ. On the DVDs, you can select individual organ demonstrations, performances, or play the whole lot in one go. The CDs have the usual track markings.

Filmmaker Will Fraser’s direction, together with the filming and recording is first class in what must have been technically a very difficult project. The balance of the sound between organs is occasional a bit deceptive. For me, this was most apparent in the recordings from Christchurch Spitalfields, which sounds a lot louder than in real life, where it has a restrained and refined sound. That said, the technical complications of balancing the sounds of so many organs, heard one after the other, must have been enormous. Not all the organs are in the finest state of tuning, but expecting each organ to be tuned before each recording would have been an expensive and complex task.

Although this is clearly aimed at organists and organ-lovers, it will appeal to anybody with an interest in the technical and musical developments of one of the most remarkable of all musical instruments. The discussions with a range of experts in the field raise many interesting questions and observations about the English Organ.

I won’t attempt to precis the vast amount of information in this comprehensive overview, but it is clear that wider technical and social developments in England had an influence on the style of organs that were built. This aspect is explored well, along with the musical and constructional influences. The first of the three documentaries start with the question “What is Englishness”. Whether by the end of several hours of intense listening and viewing you will come to any conclusion is perhaps unlikely. The final discussion about where we are at now with an ‘English’ organ, and where the future lies, certainly needs some further exploration, as does any discussion about the future. Without getting into current UK politics, what does shine through is the long-standing influence of builders and musicians from the rest of Europe on the development of English organs.

As a taster, you can see an introductory video to the whole box set here and the Sydney Town Hall demonstration here. The box set can be purchased here.