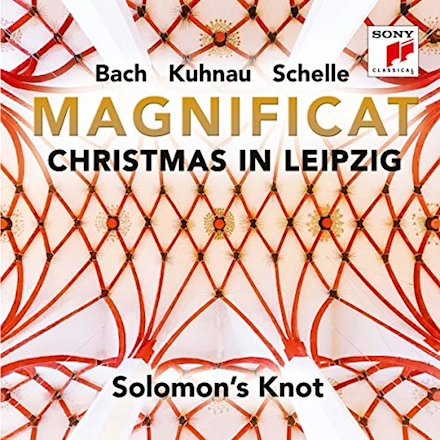 The three composers represented on this recording from Solomon’s Knot were successive Kantor’s of Leipzig’s Thomaskirche between 1677 to Bach’s death in 1750. Johann Schelle (1648-1701) was a former choirboy under Heinrich Schütz in Dresden and Thomaskirche Kantor from 1677 to his death in 1701. Johann Kuhnau (1660-1722) may have been a cousin of Johann Schelle, and certainly worked with him, becoming organist at St Thomas aged just 24 and still a law student. He succeeded Schelle as Kantor in 1701 and was Bach’s immediate predecessor. Bach took over in 1723, and stayed until his death in 1750.

Johann Schelle’s Advent cantata Machet die Tore weit is a festive piece, the rousing opening chorus featuring trumpets and timpani and is followed by four verses for solo voice and continuo before the soloists and chorus combine for the final verse repeated opening chorus.

In case you are wondering why the two Magnificats are deemed to be Christmas music, there are both special versions, incorporating Christmas Laudes within the traditional Magnificat text. Johann Kuhnau’s Magnificat is a flamboyant work. The festive fanfare-like introduction is followed by a sequence of solos and choruses. Like the earlier Schelle piece, Kuhnau is not particularly harmonically adventurous but makes up for it by his instrumental colouring, notably with the violin flourishes on the words qui potens est and the instrumental drop-out at the end of Esurientes as the rich are sent empty away. The first of the Christmas interpolations is Von Himmel hoch, the chorale sung against a vigorous violin line as the angels tumble down from heaven. There is an attractive tenor aria Et misericordia, with a throbbing bassline reflecting ‘those that fear him’ while the gentle vocal line represents ‘his mercy’. The Gloria is a dramatic bass solo over an emphatic accompaniment.

The E flat version of Bach’s Magnificat was first performed in July 1723, just after Bach’s arrival in Leipzig. It was reprised that December with the addition of four seasonal movements. Ten years later, Bach re-worked it into the more familiar D major version. It is difficult to imagine that Bach hadn’t found Kuhnau’s Magnificat in the St Thomas archives or, at least, knew of Kuhnau’s compositional style. He includes the same Christmas Laudes in his setting, uses similarly festive instrumental forces, with three trumpets and timpani (plus an additional two recorders), but out-does Kuhnau in his descriptive writing at the various moments of drama. But there the comparison ends.

As is so often the case in programmes which compares Bach with his near contemporaries, Bach’s musical genius shines through. The chorus Omnes generationes is an early example, with the voices piled on top of each other to represent all the generations. This was one of several fascinating matters of interpretation by Solomon’s Knot. The chorus entry at omnes generations is traditionally taken at a faster speed, although there is nothing in the score to indicate such a change of pulse or speed. Solomon’s Knot is to be congratulated on being almost alone in doing just what Bach seems to have intended. In the following Quia fecit, Inga Maria Klaucke’s obligato bassoon gives a delightful interpretation of the ‘mighty magnifying me’, complete with some jaunty improvisatory additions to the score.

All the singers have solo moments, generally of an excellent standard, although there are a few moments when the vibrato is a little excessive for my tastes, for example, in Bach’s Et exsultavit. As a chorus, they are strong, with each voice clearly identifiable – the emphatic final Amen of the recording is absolutely memorable. The youthful instrumentalists are outstanding, and credit must go to the leader, James Toll for his key role in bringing everybody in together. Of the many key instrumental moments, those of Leo Duarte, oboe, Inga Maria Klaucke, bassoon (and both on recorders), George Ross and Tom Foster as continuo cello and keyboards are prominent.

I was initially rather surprised to find that this is Solomon’s Knot very first CD. I have been reviewing very positively them since their formation around 10 years ago, and remember their performance of this programme in St John’s, Square in 2015. They are a very visual group, singing without scores and with subtly dramatic interpretations of the music, that brings the audience into the world of their music. Each member of the ten-strong choir acts individually, for example standing for choruses one by one, rather than en masse, and responding to the text as individuals. There is no conductor and although Jonathan Sells is notionally the artistic director, you would struggle to notice him actually directing. To have so many musicians working together (27 in this case) without obvious direction is a delight, as well as the visual advantage of not having to look past somebody waving their arms about.

They clearly had some reservations about released a recording, as their performances are very based on the concept of live performance. They have gone out of their way to make this as ‘live’ as possible, recording it live (with a few same-day patches) during their concerts at Milton Court in London in December 2018. Although I was not able to be at that performance, I gather there were strict instructions to the audience to keep a moments silence at the end of pieces and to treat the hall as a recording studio. This they managed very successfully: there are no indications that this is live performance in front of an audience.

This recording is a delight, and well represents Solomon’s Knot particularly individual style of live performance. Performing with soloists drawn from a small choir is far closer to Bach’s original than the large choirs that we have got so used to. The recording levels are quite low, so adjust the volume to taste.