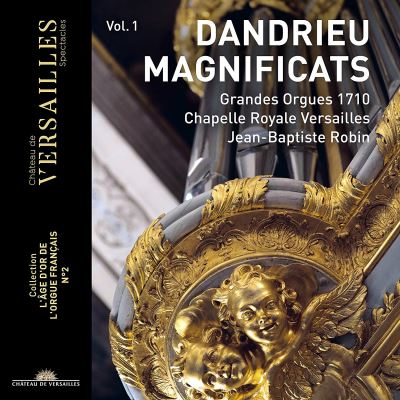 The second in the L’âge d’or de l’orgue français series featuring the 1710 organ in the  Versaille Chapelle Royale focuses on Jean-François Dandrieu (1681-1738). From 1721, he was one of the four organists of the Chapelle Royale. He had an early introduction to Court musical life when, aged five, he played the harpsichord to the Palatine Princess Elisabeth-Charlotte of Bavaria, wife of Philippe d’Orléan, Louis XIV’s brother. He succeeded the famed Nicholas Lèbegue as organist of Saint-Merry, Paris in 1704/5. From 1733 he added to these posts the position of organist to the now-demolished St Barthélémy, a role previously held by his uncle and which after his death, was passed on to his daughter.

Dandrieu’s Premier Livre de Pièces d’Orgue was printed posthumously in 1739. It is important amongst many such Parisian organ books for its use of counterpoint (heard notably on this recording with an intense Chromatic Fugue and a Fugue on Ave maris stella) and secular music, particularly reflecting that of Lully’s operas. A number of the organ pieces are transcriptions of instrumental sonatas and will be the focus of Volume 2 of this edition. This Volume includes four of his Magnificat Suites plus miscellaneous pieces.

Typically for such French organ Suites, each of the Magnificat Suites open with a Plein Jeu overture, using the full chorus of the flue stops of the organ. After a sequence of pieces for a wide variety of typical French registration, the Suites end with a powerful Dialogue for the Grand jeu, the martial combination of reeds and cornets of the organ.

The other pieces offer a glimpse at the wide range of musical styles offered by Parisian organists. They include three of the famed Noël variations, a curious Carillom ou cloches, and the concluding majestic Offertoire pour le jour de Pâques, based on the chant O filii et filiæ.

The Versailles organ was built by Robert Clicquot and Julien Tribuot. it is positioned in the prime visual and acoustic position directly above the high altar. It survived the French Revolution, but was changed in the 1870s by Cavallé-Coll who rebuilt is as a romantic instrument. Since then the organ has been rebuilt in accordance with the original 18th-century instrument. The current pitch is a415 and the temperament is based on one suggested by Corrette, a later organ at Versailles.

The liner notes include some rather curious English translations, the specification of the organ, but not the individual registrations of the pieces. That said, French registrational practise during this period was relatively formulaic, often forming the title of the pieces, the latter is not a great loss. The colourful sound of the French Baroque organ is distinctive and dramatic. This series of recordings (and there are more to come) is one of many recordings worth exploring.