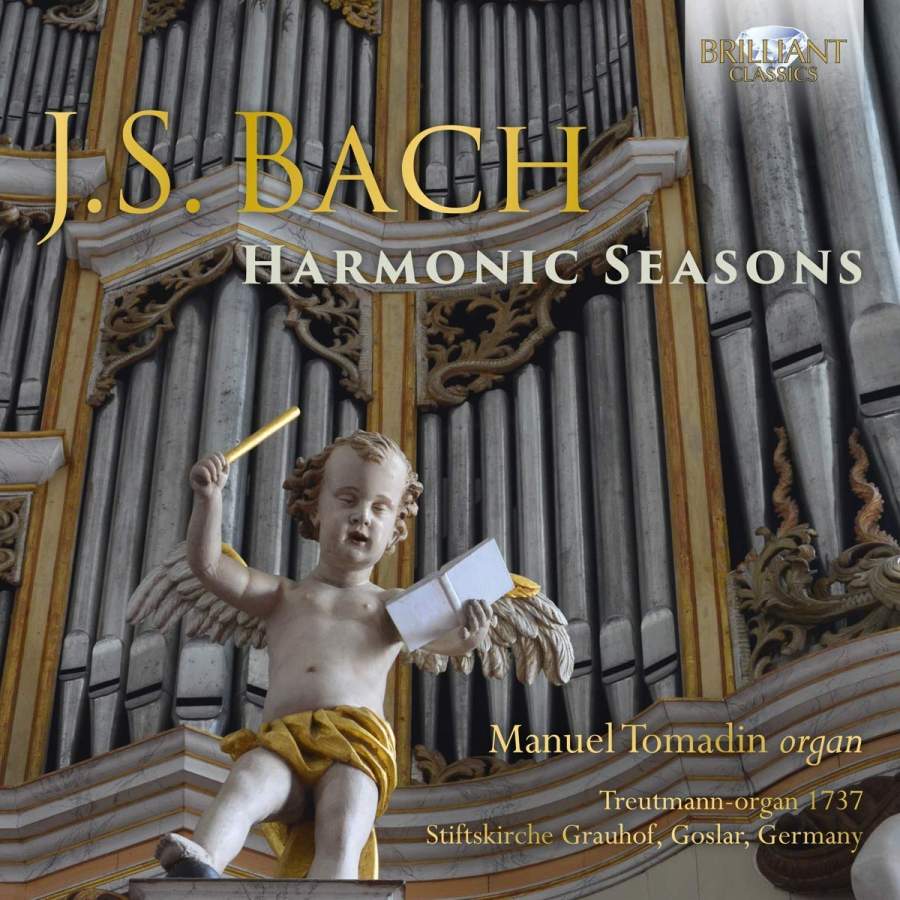 The title of this recording reflects the way the 12 pieces are arranged, reflecting Bach’s own predilection for grouping pieces together in organised sets. In this case, the “Seasons” are indeed “Harmonic”. The four groups of pieces each start with a Prelude and Fugue or Fantasia, and the groups descend in key order through the “perfect, divine triad” from G to E to C, the first major, the subsequent two both in the minor key. The final tonal and harmonic resolution comes with the concluding C major Prelude and Fugue.

Although the 12 pieces could perhaps reflect the months of the year, there appears to be little or no musical link to the geographical seasons as we know them. But the harmonic progression does seem a sensible way to organise the programme, as does the contrast the larger scale pieces with the smaller. Two of Bach’s most monumental pieces are included, the Prelude & Fugue in E minor (BWV548) with its ‘Wedge’ fugue (so named because of the shape of the fugue subject) and the massive Prelude & Fugue in C minor (BWV546). One unusual inclusion is the Kleines harmonisches Labyrinth (BWV591), not usually considered an organ piece.

The organ is the 1737 Treutmann in the Stiftskirche Grauhof bei Goslar, south-east of Hanover in Germany. It is one of the finest surviving organs of the period. It was an early example of the breakaway from the ‘Werkpricip’ organ of the North German 17th century – where each division of the organ was clearly represented in the separate compartments of the case. At Grauhof, the case is a unified whole, the three manual divisions contained within it and speaking as a coherent whole rather than as acoustically separated units. This makes it particularly suitable for Bach’s more mature organ works.

The specification includes what was the then unusual feature of Viola da Gamba stops at both 16′ & 8′ pitch on the Hauptwerk. They are heard in the choral prelude Christ, under Herr, zum Jordan Kam. The other principal feature of the organ is the 32′ pedal Groß Posaunen Baß, a stop that Bach would have loved. With commendable restraint, Manuel Tomadin only uses it one piece, the C minor Prelude.

Manuel Tomadin plays with refined articulation and touch, and an impressive sense of the structure of each of the pieces. He chooses excellent registrations for all the pieces. More information can be found here.