The Music-at-Hill Concert Society was founded 50 years ago as the St Anne’s Music Society based in the church of St Anne & Agnes Church in Gresham Street, then the home of London’s Lutheran congregation. The church and the music society moved to St Mary-at-Hill in 2013. Music-at-Hill arranges weekly Friday lunchtime concerts, often of early music. During the four weeks in July leading up to the date of Bach’s death, they present the annual St. Anne’s International Bach Festival now in its 24th year, run in conjunction with its partner organisation, the City Bach Collective, who run regular Bach Cantatas for the St Anne’s Lutheran congregation in St Mary-at-Hill. The final two Fridays of the four-week festival featured two lunchtime recitals and a Gala Bach Concerto Finale from the City Bach Collective.

The lunchtime concert on Friday 19 July was given by violinist Hazel Brooks, Poppy Walshaw, viola da gamba, and Dan Tidhar chamber organ. The programme was Prelude to Bach: music from the North German Protestant tradition with music that Bach grew up with. Hazel Brooks opened with Gottfried Keller’s unaccompanied Prelude, with its complex double-stopping, before the gamba and organ joined in with a Ciaconna. Two pieces in the typical 17th-century stylus phantasticus followed: David Petersen’s Sonata 5 in G minor and Johann Jakob Walther’s Sonata 10 in D. Johann Schop’s diminutions on the Lachrimae Pavaen introduced the concluding Bach Sonata in E minor.

With the exception of the Bach, this was music that might not have been known to many in the audience, but it revealed some of the glorious music from the pre-Bach 17th-century Germany. The three performers revealed the inner textures and colours of the music, notably the Petersen and Walther pieces with their hint of mini-operas.  It was lovely to start with the sound on an unaccompanied violin – a glorious sound in a church acoustic.

Anne Amalia’s Sonata was composed for her flute-playing brother, Frederick the Great. She would have been far more familiar with CPE Bach’s music (her court composer) than JS Bach’s. The organ she had built, and for which CPE Bach wrote his six Organ Sonatas, still exists in a Berlin church. Her flute sonata combined elements of his Rococo and empfindsamer Stil.

The two JS Bach Sonatas were of particular interest as they both had the same bass line for all four movements of each Sonata. Generally assumed to be a bass-line that Bach used for teaching purposes, the melodic lines above the bass line demonstrate how different moods can be created from the same underlying continuo.

The Bach Festival finished with an early evening Gala Concerto Finale by the City Bach Collective, directed by violinist Hazel Brooks with the other soloists Belinda Paul oboe, and Dan Tidhar harpsichord. Rather surprisingly, they opened with a piece that is almost certainly by Bach’s son, Wilhelm Friedemann, the Overture, (xBWV 1070), published a few years after Bach’s death. They then returned to more usual Bach fare with the Violin Concerto in A minor, BWV 1041, the Harpsichord Concerto in A, BWV 1055, and the Concerto in C minor for oboe & violin, BWV 1060. The latter was preceded by a lovely performance of the famous Air from the 3rd Orchestral Suite, played at a sensible speed, with attractive articulation and none of the neo-romantic gloss that is usually applied. The playing throughout was excellent, as it was with the two lunchtime concerts. The only slight quibble was that the harpsichord was rather underpowered in its Concerto, even for the small accompanying forces.

It was perhaps appropriate, given the coffee and biscuits that precede Music-at-Hill’s Friday lunchtime concerts, that at least one of the concertos was performed at Zimmermann’s Coffee House in Leipzig, now sadly only existing in the form of a plaque. The programme note mentioned that Zimmermann didn’t charge admission, but made his money from the coffee he sold during the regular gatherings of the Collegium Musicum music society – an early version of Music-at-Hill. The concerto finale was followed by a Golden Jubilee reception with an exhibition of archival material from the earliest days of the Society.

This was the last Music-at-Hill event in the church of St Mary-at-Hill. From 6 September, the regular Friday lunchtime concerts (at 1:10) move to the delightful church of St Giles-in-the-Fields (60 St Giles High St, WC2H 8LG, close to Tottenham Court Road tube station), a church with a history back to the 12th-century, now with a 1734 building by architect Henry Flitcroft, the first Paladian-style church in the UK. The church has an important organ with pipework dating back to the late 17th-century, now restored back to that earlier style. It will be heard in the second concert of the new season (13 September) in music by three organists of Westminster Abbey (Blow, Purcell & Croft) in the years around 1700. For the time being, the society will retain its registered name, but with the geographical addition – Music-at-Hill: Midtown Concerts. Future concert details can be found on its website or Facebook page. 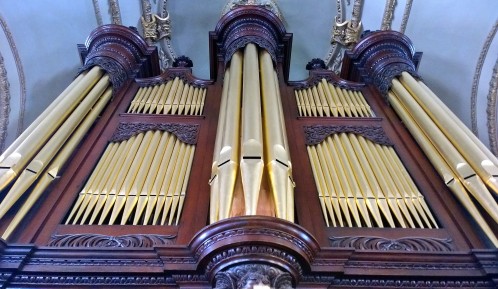