I think that few opera-goers would argue that Handel oratorios should not be staged as operas, despite the risk of letting opera directors loose on them. They are generally full of operatic images and action and usually lack the textural and plot bafflement and cross-dressing of many of Handel’s proper operas, although their Biblical stories come with their own element of bafflement. Their English language text can be rather clunky, as it certainly is in Belshazzar, but the momentum of the music and the large role for a choir makes them a particularly effective musical and theatrical show.

Following on from their recent partnership with the Academy of Ancient Music for Figaro The Grange Festival partnered with the choir and orchestra of The Sixteen (celebrating their 40th birthday) for a fully staged version of Handel’s Belshazzar. the story is taken from the Book of Daniel, and recounts the fall of Babylon at the hands of Cyrus the Great and the freeing of the Jewish nation from captivity. Directed by Daniel Slater with Robert Innes Hopkins as the designer, the setting, staging and direction was, with a  few exceptions, excellent. A wall of Pink Floyd proportions was initially spread across the stage front, with the tip of a Breughelesque Tower of Babel peeking above the ramparts. Said tower swivelled through 180 degrees to reveal the internal settings.

The first of the directorial ‘exceptions’ was at the very beginning, when Nitocris, the mother of Belshazzar, sang her extended accompanied recitative Vain, fluctuating state of human empire! while mourning at the coffin of, I assume, her dead husband, who has no part in, or relevance to, the story. It seemed a rather awkward device to accompany a dramatic opening solo that needed no such oddities. After Nitocris’s lengthy scene, came a moment straight out of Monty Python and the Holy Grail, with the colourfully clad chorus of Babylonians hurling abuse down at Cyrus standing outside from the wall ramparts. 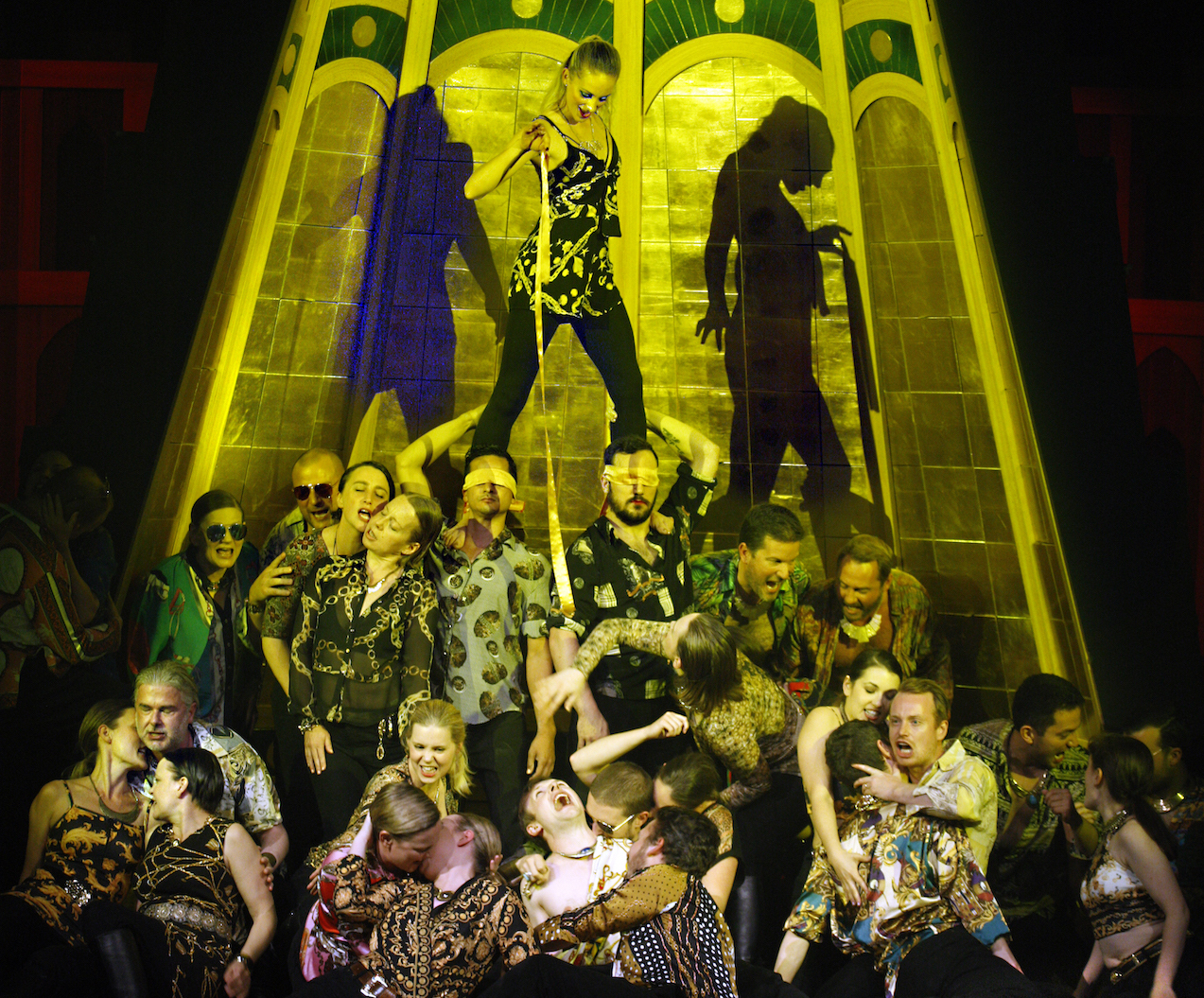 The chorus was at the fore of this production, with members of The Sixteen combining with the house chorus in some spectacular numbers and rapid costume changes. Switching from Babylonians, rather predictably black-clad Jews to the Persian army of Cyrus. One surprising issue with the chorus was the amount of vibrato, something not usually associated with The Sixteen choir with their usual early music focus, but rather more than can be blamed only on the Grange house chorus. Excessive vibrato was also an issue with several of the singers, notably with the Queen Nitocris whose vocal line and ornaments were decimated by her consistent and uncontrolled vibrato.  I don’t know who selects the singers for these Grange Festival productions but I would have thought that Michael Chance, a respected interpreter in his singing days, and Harry Christophers, the conductor of The Sixteen and an equally respected director of ‘early music’ would have chosen voices rather more in keeping with the style of Handel. 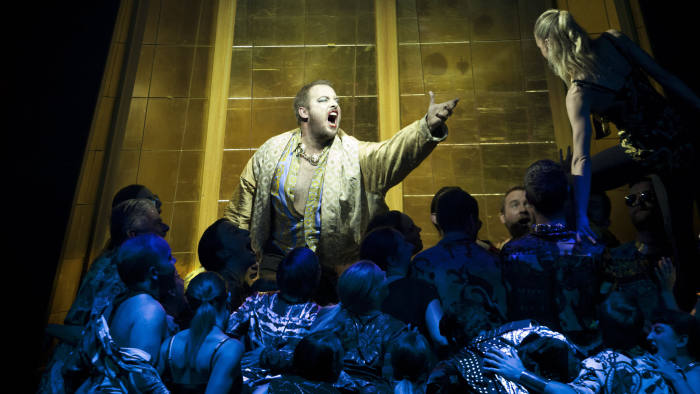 That said, the singing and acting were otherwise impressive, notably from Robert Murray as Daniel, Henry Waddington’s as Gobrias and the countertenors Christopher Ainslie as Cyrus and James Laing as Daniel. Amongst the highlights was his aria Oh, Sacred Oracles Of Truth and the duet between Claire Booth & Christopher Ainslie (as Nitocris & Cyrus) Great Victor, At Your Feet I Bow. Also impressive were the three lithe acrobats, notably Haylee Ann whose impressive antics with a hanging curtain threatened to overshadow the music. Instrumentalists who impressed included David Miller, theorbo, and the oboe players Hannah McLaughlin & Catherine Latham. Harry Christophers directed with sensitivity.

Directorial oddities included some curious romantic encounters between Nitocris & Cyrus, unrelated to Handel’s libretto and the underlying Biblical story and adding nothing to the plot. And I reckon some of the singers can have done without having to sing lengthy arias while balancing on very small footholds on the Tower of Babel, as pictured below. But, overall, the real winner was Handel’s music for this little known oratorio, full of show-stopping choruses. 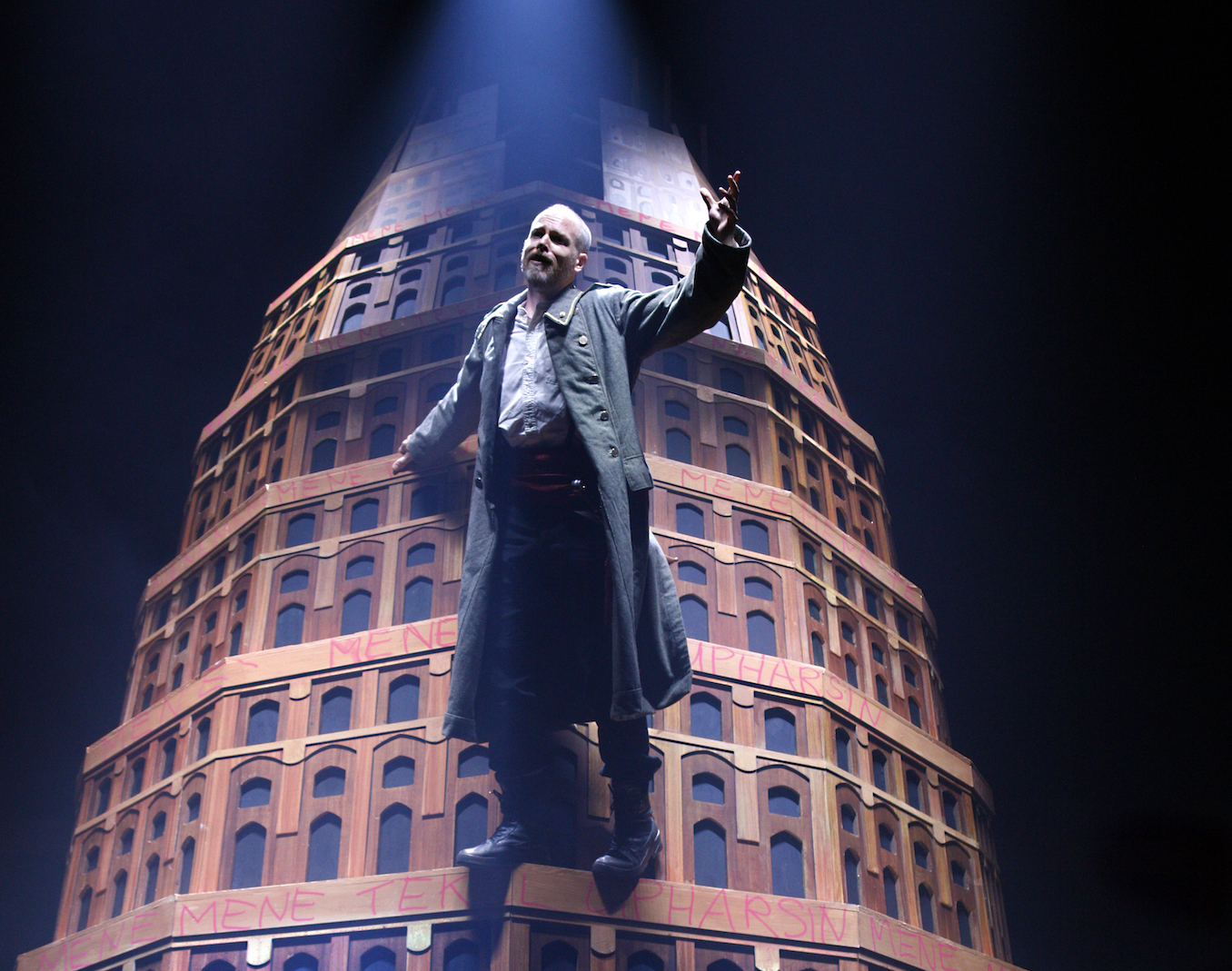