Bach was influenced by a wide range of musical styles of his time, travelling to learn about other musical traditions and copying manuscripts of other composers. If he had been around, not in the 1700s, but in the 1960s, when the likes of Pink Floyd, Keith Emmerson, and Rick Wakeman were active; when Wendy Carlos’s ‘Switched-On Bach’ was released and, a few years later, when Kraftwerk highlighted their genre of electronic synth-pop, then he would surely have appreciated the world of synthesised music. Indeed, his own instrument, the organ, is a giant wind-blown synthesiser, with the names and sounds of most of its stops replicating Renaissance instruments. The four-strong group Art of Moog base their music on Bach, Wendy Carlos and Kraftwerk under the banner of ’21st-century Hyper-Bach on Synthesizers’.

Their concert for the Waterloo Festival was given in the delightful Cello Factory, an art gallery in the streets close to London’s Waterloo Station. Three distinguished early-music harpsichord players (Robin Bigwood, Steven Devine & Marin Perkins) gathered around a collection of keyboards, synthesisers, vocoders and other complicated looking little boxes, together with the equally distinguished recorder player Annabel Knight, who clipped an EWI5000 (an Electronic Wind Instrument) onto a lanyard around her neck. This was not going to be a ‘normal’ period instrument early music event – indeed, we were told that what we were about to hear was “absolutely bonkers”.

The opening swirling aural mist of the first of Bach’s ’48’, reminded me initially of Pink Floyd. Each of the famous broken chords only needed to be played once as a sampler repeated it until the next chord change. The sound phased and faded in and out of focus, eventually segueing into the energetically bustling Sinfonia from Cantata 29. The vocoder made its first appearance in the aria Sanfte Soll from Bach’s Easter Oratorio, putting Robin Bigwood’s voice through an extraordinary range of contortions.

The astonishing range of tones, timbres and textures continued through their programme of well-known, and lesser-known Bach pieces. The chorus Liebster Gott, wenn werd ich sterben from Cantata 8 is a typical example of Lutheran yearning for death, to which Bach adds the sound of a ticking clock and bell sounds, given an impressive aural makeover via the synthesisers and vocoder. The opening Aria from the Goldberg Variations was followed by a realisation of the 14 canons that Bach appended to the score, including what sounded like a ‘Micky Mouse’ moment.

In the Moog version of the organ chorale prelude on Ich ruf zu dir, the evolving harmonies of the accompanimental broken chords melted into each other as the elaborated melody unfolded above, while Zion hört die Wächter singen (better known through the organ chorale prelude Wachet auf, ruft uns die Stimme) included what sounded like the tinkle of an old-fashion typewriter bell, or Monty Python’s ‘Machine that goes Ping!, at the end of phrases.

After a programme of mainly short pieces, they finished with a complete performance of the last of Bach’s Brandenburg Concertos, with Bach’s complex interweaving of the five or six parts. Snippets of several pieces from this concert can be heard in this clip from a live concert in Kings Place –

It was noticeable that the packed venue included many who would not normally be expected to be seen at an early music or classical music concert, including a very healthy number of younger people. Art of Moog can be heard again in London on Sunday 30 June in a Classical Transmission event at Antenna Studios, Bowyers Yard, Haynes Lane, London SE19 3AP. They are well worth hearing. 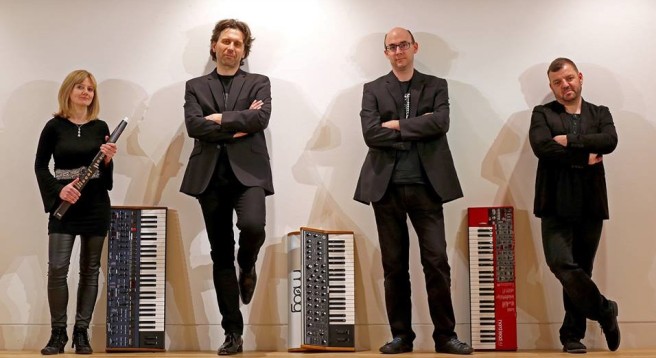