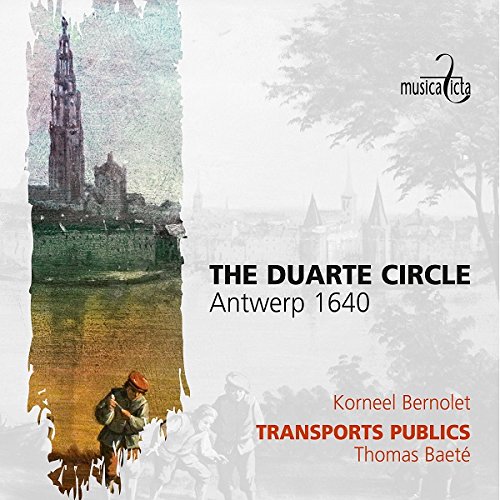 What a delightful recording! Even without reading any of the notes, or knowing nothing of the backstory, the music on this disc will enchant you. The fact that it has such a fascinating background just adds to the magic. The music is based on concerts given in Antwerp in the years around 1640 in the household of the Duarte family, a wealthy Portuguese/Jewish family who lived as Catholics whilst maintaining their own Jewish heritage and faith. Amongst their number was the composer Leonora Duarte (1610-1678), whose seven surviving Sinfonias for five viols form the backbone of the recording. Information about the instruments and the pieces the family played comes from a letter from somebody who was at one of those concerts.

The Duart family left Portugal to escape the Inquisition, setting in Antwerp and becoming wealthy jewellery and diamond merchants. Leonora’s parents were trained as musicians and, amongst others, knew the famed harpsichord Antwerp maker, Ruckers. They mixed comfortably with the artistic and influential circles of Antwerp, counting Vermeer, Rubens, Huygens, and the influential English aristocrat, William Cavendish, Duke of Newcastle.  Leonora was around 30 in 1640, one of six children, all well trained in music, although Leonora is the only one with any surviving pieces.

This recording imagines one of the concerts held in the Duarte’s home on the Mier, Antwerp’s main street. As well as Leonora’s own Sinfonias (here performed on a variety of instruments), there are pieces by John Bull, the famed English organist of Antwerp Cathedral until his death in 1628, and Frescobaldi, whose music was published in the Netherlands, as well as other local musicians. Although probably not performed in the house concerts, musical reflections of the families Jewish heritage are included with Rossi’s setting of Psalm 137 Al naharot bavel, and an arrangement by Leonora of the Sephardic song El paso del mar rojo. The melody of the latter is also hidden in one of Leonora’s Sinfonias.

The CD notes (in Dutch, English and French) do not give much information about the group Transports Publics, and Googling their name has the inevitable consequences. But their imaginative combination of instruments makes for a magical and evocative sound world. There are solos from Korneel Bernolet playing the delicate ‘Muselarr’ virginal, a copy of the 1650 instrument in Antwerp’s Museum Vleehuis (sponsors of the recording) and very welcome change to a harpsichord. There are also contributions from a hammered dulcima, two violins, alto and bass viols, archlute, theorbo and cittern. Transports Publics are also joined by impressive guest sopranos Gret de Geyter and Olalla Alemàn. They are directed by Thomas Baeté.

The international nature of the Duarte’s music making is perhaps confirmed by the fact that Leonora’s Sinfonias surviving in Oxford’s Christ Church College (Mus. ms. 429). The recording was made in Antwerp’s early music centre AMUZ, a converted church. The recording and acoustics are excellent.