Handel’s Berenice was first performed in May 1737 in the Covent Garden Theatre, now the home of the Royal Opera House.  It was a tricky time for Handel and the London opera scene, with two opera houses competing for a limited audience. Handel promoted a large-scale 1736/7 season, but none of his new operas (Armino, Giustino, and Berenice) was successful. Handel also suffered a serious decline in his health, not least suffering a stroke in April 1737 that paralysed his right hand. It seems that Berenice only had three performances, probably rehearsed and directed by John Christopher Smith Jnr.  It returns to the present day Covent Garden (or, at least, the bowels of the present day Covent Garden) for the first time since its premiere, in the newly restored basement Linbury Theatre, in a Royal Opera House production in conjunction with the London Handel Festival.

Despite having just seven characters, the plot is mind-bogglingly complicated. Berenice, the currently unmarried Queen of Egypt, loves Demetrio, Prince of Macedonia who loves Selene, Berenice’s sister. Selene also loves Demetrio, albeit in secret. Prince Arsace loves Selene. Selene does not love Arsace, but Berenice instructs her to marry him. Berenice is encouraged to marry Prince Alessandro of Rome, who falls in love with her at first sight. Berenice does not love Alessandro. Selene and Demetrio plot to overthrow Berenice with her enemy, Mithridates. Incidentally, the historic Berenice III was the daughter of Ptolemy IX, the subject of Handel’s far more successful early opera Tolomeo (1728). Alessandro, however, has nothing to do with Handel’s 1721 Alessandro. Although nothing to do with the plot, the historic Berenice had earlier been married to her uncle, and Alessandro was her cousin, step-son and possibly, half-brother. There is a further twist, to be revealed later.

The production (directed by Adele Thomas, with designs by Hannah Clark) is heavy on outrageously over-the-top ‘Baroque’ costumes (helpfully colour-coded to make identification easier), rouge-cheeked make-up and slapstick antics. It was clearly aimed at entertaining a typical London opera audience, rather than exploring the most intense depths of a complicated combination of love and politics. The antics notably came from an athletic Patrick Terry as Arsace, played throughout as a clown. Jacquelyn Stucker, one of two ROH Young Artists and a finalist in last years Handel Singing Competition, was a very impressive Alessandro (pictured below with Patrick Terry, right). 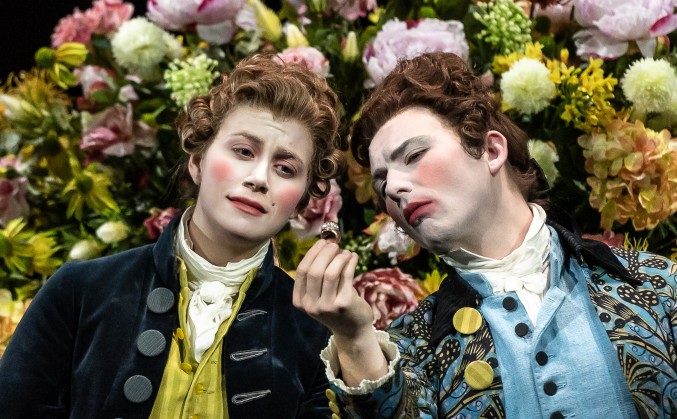 The sisters Berenice and Selene are played by Claire Booth and Rachael Lloyd, the former with some excellent dramatic acting, the latter with the more stable voice. James Laing (Demetrio) and Alessandro Fisher (Fabio) had the best voices of the evening, not least for their control of the irritating and interfering vibrato that affected most of the other cast to varying degrees. WIlliam Berger was Aristobolo. The English translation was by Selma Dimitrijevic and involved some amusing asides and a few references that the audience related to the present day goings on in Parliament. The green padded-cushioned seating that formed the focus of the semi-circular setting took something of a pummeling as the cast leapt and vaulted over the top of it to approach the central stage area. The cast stayed on stage throughout, sitting on the edge of the seating, or just standing around at the back as the events unfolded.

Also on stage were the continuo group of harpsichord, theorbo and cello, the three players togged up in similar Baroque style, and being dragged into the action at various moments. They are pictured below, surrounded by the rest of the cast. the distinguished Handelian, Laurence Cummings conducted the London Handel Orchestra, bringing a much-needed element of authentic period musicianship to an otherwise rather unstylistic vocal performance from the singers, who were all from the ROH stable, and therefore probably not so familiar with what is generally accepted, at least by me, as a Handelian style of singing. Diction in the curiously lively acoustic of the Linbudry theatre was a bit of an issue, with no subtitles to assist.

Musically I dare to say that this is not Handel at his finest. The orchestral accompaniment is restrained in style and instrumentation, with just two oboes added to the strings (and, on this occasion, a continuo bassoon. Although Handel responds well to the complex range of emotions on display, there are no stand-out moments, and the only real moment of instrumental interest was the sublime oboe solo from James Eastaway in Act 3. That said, Cummings and the instrumentalists provided an object lesson in period style, articulation, expression and clarity.

The historical after-story to the events portrayed in the opera is that, just 19 days after Berenice’s marriage to ‘Alessandro’ (Ptolemy XI Alexander II), he murdered her and was then lynched by a furious mob. 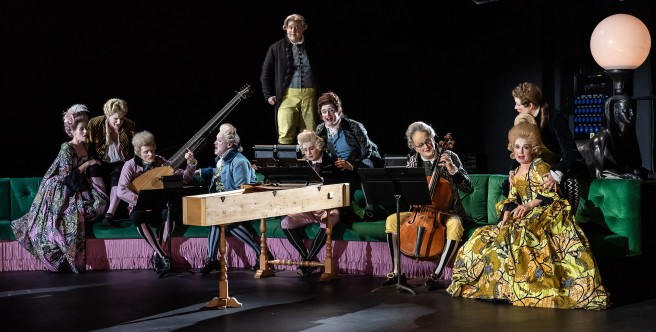