In what was almost certainly the first live UK performance of Haydn’s Applausus Cantata (Jubilaeum Virtutis Palatium, Hob XXIVa:6), the Mozartists (the concert-performing wing of Classical Opera) opened the 2018 season of their ambitious Mozart 250 project. This started in 2015, the 250th anniversary of Mozart’s visit to London where, incidentally, he stayed not far from the Cadogan Hall in Ebury Street, and wrote his first symphony, aged 8. The aim is to annually explore the music written by Mozart and his contemporaries exactly 250 years previously.

In 1768, this year’s focus, Mozart was 12 years old and Haydn 36 and well settled into the princely Esterházy court where he directed most of the musical life of the court. He received an invitation from the wealthy Abbey of Zwettl, about 120km west-north-west of Vienna to write an ‘applausus‘ cantata to celebrate the 50th anniversary of their abbot Rainer Kollmann, first taking his monastic vows. Although composed in quasi-operatic style, with a series of accompanied recitative leading up to da capo arias, a duet, quartet and a final chorus, there is no plot in any operatic or literal sense. The four Cardinal Virtues of Temperance, Prudence, Justice and Fortitude sing the praises of the Abbot in a convoluted Latin libretto, probably written by one of the monks. A personification of Theology/Wisdom moderates some of their utterances. I am sure the text meant something to the 17th-century monks of Zwettl, but I found its vaguely moralistic meanderings completely incomprehensible. The repeated references to a ‘Palace’ perhaps reflected the wealth of the monks of Zwettl, whose medieval Abbey buildings had been thoroughly reconstructed in the Baroque style a few decades earlier, complete with one of the largest and most expensive organs in Austria (1731, Egedacher) – all still existing. “How blessed I am to be an inhabitant of this building!’ is one of Prudence’s utterings, to which Justice notes that “our Palace is celebrated in the eyes of the highest”. So that’s all right then!

Haydn didn’t have time to write an overture, so suggested that the first two movements of one of his symphonies be used instead. On this occasion, this was the Symphony 38 in C, written the year before. It was a good choice on both musical and s chronological terms, the bustling orchestral opening of the cantata proper making a natural third movement progression after the delightful Andante molto with its distinctive echo effects. The four Virtues introduce themselves before singing a Quartet cleverly contrasting pairs of voices. Theology (bass David Shipley) intervenes with a bit of moralistic nonsense in one of the most overtly operatic of all the arias, with expansive melismas covering a wide vocal range.

It continues with a sequence of ‘scenes’ each headed by such headings as “Prudence congratulates herself that her influence in this Palace has extended to its customs”. This one concludes with a duet between Temperance and Prudence, originally sung by two boys, but here with a soprano and mezzo (Ellie Laugharne and Elspeth Marrow), both with rather too vibrato-laden operatic voices for my own taste and, I suggest, for the style of the original boys singing. From then on it all became rather predictable. The recitatives were generally accompanied by the full orchestra, albeit in a rather formulaic series of interludes inserted between each phrase of the sung text, which was often with minimal continuo support. These accompagnato orchestral interjections were interesting enough in themselves, but the novelty did wear a bit thin after a while.

Each of the following scenes ends with an aria until the final chorus. All are da capo, often making even less sense of a libretto that was clearly not designed for a first-part repeat. Each part of the arias finishes with a cadenza. Individually, many of the arias are very fine, with testing moments for the five soloists. Noteworthy are the two enormous tenor arias for Justitia (Thomas Elwin), both with obligato solo accompaniments – which, in addition to the vocal cadenzas, get cadenzas of their own. The first is O pii Patres Patriae! lasting a mind-numbing 17 minutes. The unrelentingly steady plod of the strings is contrasted with increasingly florid harpsichord accompaniments and note-spinning soloistic flourishes, played with appropriate elegance by Steven Devine.

Haydn seems to have known the tenor, giving him the most extended arias to sing and put him in charge of the performance, which Haydn himself was unable to attend. This resulted in the curious situation of this piece being far better known for the letter that Haydn wrote, with his instructions for the performance, than for the music itself. This letter was printed in its entirety in the programme (pictured below). It really is a most interesting reflection of the musical move away from the Baroque into the early Classical period, with detail notes about dynamics, articulation (noting the importance of respecting slurs), and rejecting the usual Baroque convention on leaning into cadential notes.

One of the more musically exciting scenes was “Fortitude enjoys the pleasures of the festival and acknowledges he is created by art”, the turbulent and virtuosic concluding bass aria Si obtrudat ultimam (sung by John Savournin) reflecting the violent storms that could swallow them up in a final cataclysm, through which event their minds would remain untroubled and in the “sweetest tranquility”. The following soprano aria, Rerum, quas perpendimus, for Temperance is one of the most attractive, an obligato bassoon supporting a rich string texture with divided violas and stabilising horn chords. The last aria before the concluding chorus was the second of tenor Thomas Elwin’s lengthy contributions as Justitia, O beatus incolatus! coming in at around 16 minutes, and with the only really contrasted B-section of all the da capo arias. This had the added interest of violin solos but, yet again, the inevitable cadenzas for both singer and violinist (Daniel Edgar) at the end of each part.

In his fascinating pre-concert talk, conductor Ian Page warned us of what we were about to receive, suggesting that we approach it in the spirit of 18th-century mindfulness, not only for the extraordinary length of the some of the arias, but also because, as far as the plot, goes, “nothing happens”. It was good advice. All credit must go to Ian Page and Classical Opera/The Mozartists for performing this almost completely unknown Haydn work. I don’t suppose he would consider it his finest contribution to music, and nor do I. But I am glad of the chance to hear it complete and live in an excellent performance from singers, instrumentalists, and conductor. It contains some very impressive musical moments. It was interpreted with admirable attention to detail, notably of the concepts of phrasing and articulation that were to become a key part of the Classical period. Ian Page thankfully resisted any temptation to make more of it than it actually is, sensibly avoiding over-dramatising the few dramatic moments. His conducting always appears to be solely directed at the service of the music, and this was particularly important in this piece.

There is at least one CD, and a reduced version (omitting the continuo-only recitatives) of Capella Augustina’s 2010 recording can be heard here with useful timings for the main bits.

This musical contribution to the Abbots’s anniversary was paired with an extraordinarily lavish glazed porcelain table centrepiece, over 4 metres long, with some 60 figure groups, one of which is pictured below. It is now displayed in the permanent collection of MAK (Museum of Applied Art) in Vienna. 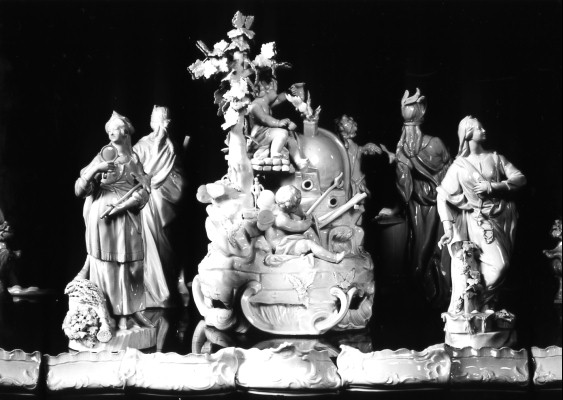 One thought on “Haydn: Applausus”