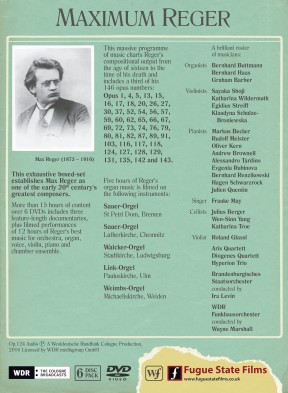 Johann Baptist Joseph Maximilian (Max) Reger (1873 -1916) is generally best known, if, perhaps, not always best liked, by organists. He is a bit of a love-or-hate composer, his extended and frequently dense organ pieces can be as hard to play as they, arguably, can be to listen to. As a breed, organists tend to concentrate on a composer’s organ music (with the possible exception of Bach) rather than exploring their music for other forces. Reger is one such, along with, for example, the contemporary, but longer-lived French composer Tournemire. If Reger is known at all to non-organists, it is probably through his chamber music. This extraordinary Fugue State Films box set of 6 DVDs, including a three-part documentary ‘The Last Giant’, aims to redress the balance of bringing Reger’s non-organ music and complex life story to organists, and the music of Reger in toto to non-organists who are not familiar with his music. For filmmaker and organist Will Fraser, of Fugue State Films, it is clearly a labour of love.

Paul Hindemith described Reger as the ‘last giant of classical music’. Early on in the documentary, Less than complimentary observations followed by contemporary critics, with whom, in general, Reger had a tricky relationship. “Reger is a sort of a musical cyclops, and strong ugly creature . . . an ogre of composition, a swollen myopic beetle with thick lips and solemn expression.” who, they opined, wrote “Intellectually overthought music of the clever man, largely about nothing“. Another contemporary critic revealed one of the essential quandaries of Reger’s music — “. . . you never know what is coming. One minute he writes like a shrill child, the next as if the performers had gone mad . . . “. Another opined that Reger’s music “Looks like music, sounds like music, it might even taste like music; yet it remains, stubbornly, not music” 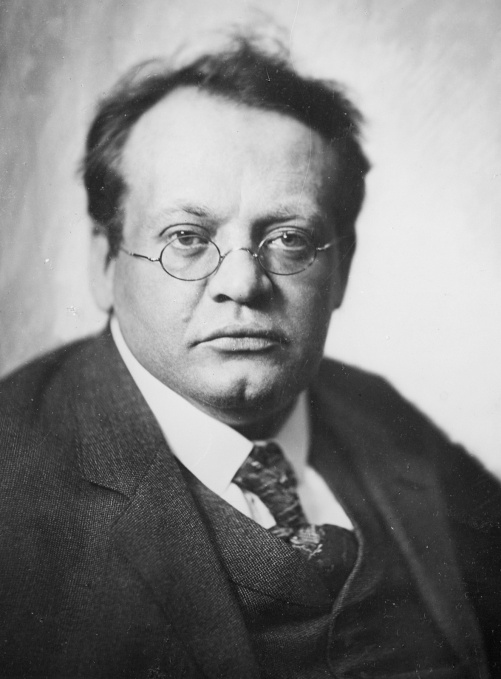 The first minute of the documentary reveals something of the contrast and complexity of Reger’s musical life, as an eloquent violin and piano Suite segues into one of his more bombastically monumental organ pieces.  Perhaps counterintuitively for an English film, you will need to switch English subtitles on at the start of the documentary DVDs, as much of the film is in German. The documentary is on DVDs 1, 3, and 5, each section lasting about 70 minutes. As a taster, the first 17 minutes of the documentary can be seen here. Those CDs also include full performances of some of the pieces sampled during the documentary. The other DVDs (2, 4 and 6) just contain filmed performances. Depending on your computer’s DVD playing facility, you can skip to the beginning of chapters in the documentary and jump to different tracks in the filmed performances, or scroll through to find a particular passage.

The three-part documentary is divided into chapters that run chronologically, starting after an introduction with Youth, Aspiring Composer, Crisis and Outpouring. Reger’s life was complex and, in many respects, sad. An alcoholic, living in complex personal times, his music seems to reflect the various phases of his life – and, to an extent, the complexities of the German-speaking world of the time. The documentary includes extracts of the pieces discussed, each segueing well into the next. It is interesting to see several of Reger’s own manuscripts, with their copious red phrasing and dynamic markings in addition to the copious black musical notes and rather manic crossings out.

With only one exception, all of the many performers and commentators are excellent. Most of them are oblivious to the camera, but one or two are rather too aware of it, notably, a singer who revels in seemingly well-rehearsed and exaggerated facial expressions and other awkwardly applied mannerisms. One of the more irritating of these is the habit of gazing lovingly at the ceiling while singing which, coupled with rather unstable and unfocused singing added to poor enunciation making this the weakest of the performers and commentators. She adopts a rather aloof pose when talking about Reger or feeding questions to the outstanding contributions (in German) from Professor Susanne Popp (pictured below) of the Max-Reger-Institut in Karlsruhe – by far the best commentator and one of the most approachable. Also from the Institut is Dr Jürgen Schaarwächter, another very approachable and knowledgeable commentator, speaking in English. One of the other fine commentators is Will Fraser himself. I particularly liked his description of the Variations and Fugue on an original theme (Op73), perhaps his most radical work. 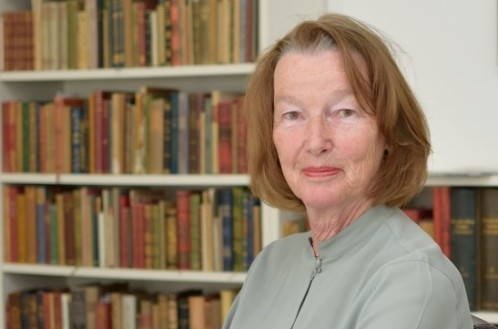 The three organists are Bernhard Haas, Graham Barber, and Bernhard Buttmann. Haas and Barber contribute important information about the organ and other works in their commentaries. Bernhard Haas brings detailed, if occasionally rather complex thinking about Reger’s music, notably in his analysis of the harmonic language of Op.57, and its relationship to Hungarian music and Schoenberg’s 12-tone style of composition. I liked his comment about it being best to play Reger’s organ music “a bit incorrectly, but with great intensity and emotion“. He also gains my admiration for playing these horrendously complex works from memory. Reger’s registrations instructions are relatively sparse, often only giving pitch indications. But the registrations in all performances all seemed apt and well-suited to the different organs, although I was rather surprised to hear a brief tinkle from glockenspiel in the performance of Op.127 on DVD6. 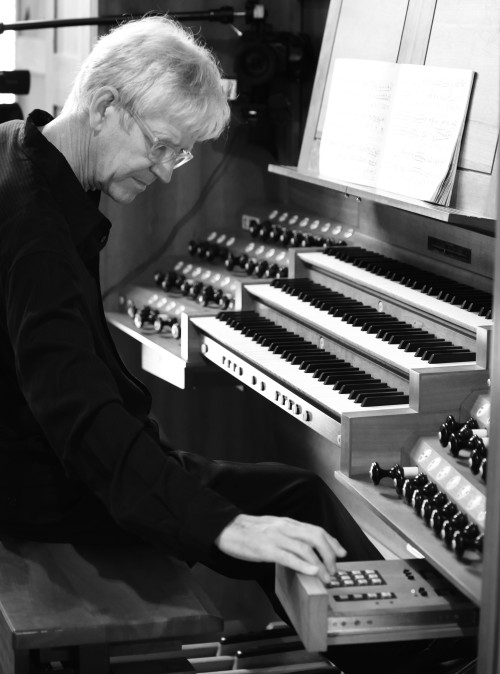 Graham Barber (pictured above) wears his insight and scholarship lightly. He gives a particularly touching homage to Norwich Cathedral organist Brian Runnett, his mentor and teacher, and the person who did most to introduce Reger’s music to the UK. This includes Barber’s recollection of turning pages for Runnett’s 1970 Westminster Cathedral recital in 1970 which included a performance of the Variations and Fugue (Op.73), which Barber plays on DVD4. Tragically, Brian Runnett was killed in a car accident on his way home from this recital, aged just 35. We hear Graham Barber discussing one of the most interesting organ performances. which comes from Reger himself, courtesy of Welte organ rolls that survive in the Deutsches Musikautomatenmuseum at Schloss Bruchsal (this extract from the film can be seen here). He also adds the perceptive comment that Reger “will never achieve mainstream status: he is far too chameleon-like for that, but he may make some partial headway in a world where there is no orthodoxy and, essentially, anything goes“.

There are many fascinating insights into Reger’s life, including the curious fact that amongst his awards, he received an Honorary Doctorate from a Berlin University medical faculty for the extraordinary reason that his music helped to calm mental patients, something that will surprise listeners to his organ music.

The Bach Variations (Op.81) are performed in the original piano version as well as an orchestration by Ira Levin. Although Levin’s description of the piece, switching seamlessly from piano to orchestra, is fascinating, I am not convinced that orchestration was worth the time and effect, particularly as Levin takes the decision to omit four of the variations. My only slight criticism of the filming is in this orchestral performance when the low and close camera position gives a very curious perspective view of the conductor. Otherwise, the quality of the filming and audio is outstanding, particularly the organ pieces.

The settings and the acoustics are always appropriate to the music, which ranges from intimate chamber works to large-scale orchestral and organ pieces.  The organ performances show the performer and the organ console from one side, with other cameras having a vertical view down onto the keyboards and to the pedal board. The latter helps non-organists understand the complexity of pedal playing technique and the various organ bits and bobs, many of which are controlled by the feet. It also gives an insight into the state of some organist’s shoes. The various page turners and console assistants also deserve mention. At first viewing, one very attentive assistant appeared to have missed a page turn, until I realised that she was busy pressing a combination piston at the far corner of the console at the same time and multi-tasking wasn’t an option.

Camera work is static, rather than mobile, with the ‘live’ performances generally cutting between three or four cameras, one covering the whole ensemble or performer, the others zooming into one or two players. The cuts between cameras can be a little too frequent for my taste, but you soon get used to them, and they always make musical sense. One advantage of having filmed performances of the organ pieces, rather than just audio, is that we are less likely to be fooled by Reger’s frequent habit of building up to an enormous climax in what, after some tortuous harmonic by-ways, could well be the home key, only to then start a new section pppp. In live performances this usually means the misplaced audience applause cover the opening bars of the next section. It is also useful to have the texts of the chorales in the Op.52 chorale fantasias shown in the relevant places – something you don’t get in the concert performance.

Reger’s devotion to Bach is evident in many of pieces. Rather like the organ music of Johann Ludwig Krebs, the pupil and disciple of Bach, he often takes a Bach idea or structural concept, and then extends it to enormous lengths as though he can’t quite work out how to stop. He was clearly fascinated by the contrapuntal writing that was the foundation of much of Bach’s music, as shown by his composing 111 Kanons in 1908.  His Sonata in a minor for violin (Op.103a) is an obvious homage to Bach, here played beautifully by Katharina Wildermuth (pictured below) and Evgenia Rubinova, piano. There are particularly fine performances by the Aris Quartett (led by Katharina Wildermuth), the expanded Diogenes Quartett, violinist Sayaka Shoji, and, at the other end of the scale, the WDR Funkhausorchester with conductor Wayne Marshall, and the Brandenburgisches Staatsorchester with Ira Levin. 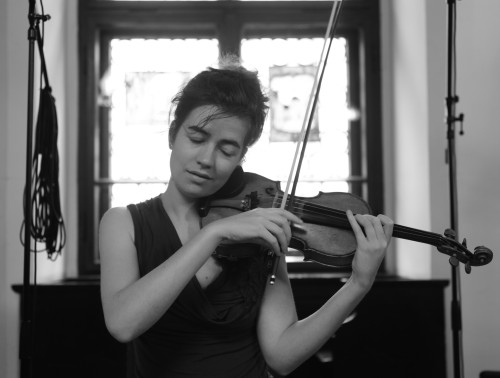 This remarkable project was financially supported by crowdfunding. It comes in a rather antique looking card box, with the six DVDs rather cleverly contained within a fold-out container. The booklet includes an introduction from Will Fraser, a list of all Reger’s works with Opus numbers (but not others) with those included in the film or performances highlighted with the performers. Specifications of the five organs are given but, not surprisingly, not individual registrations of pieces. Many scores of Reger’s music are easily available online and are worth following as you watch the performers.

Whether it will change any minds about Reger, only time will tell. But whether you are a Reger disciple or not, this excellent project gives an important insight into a particular period of musical history, as well as a fascinating, if complex, composer. Although my thoughts on his more intense organ works have not really been changed, I found it fascinating to hear some of his more reflective pieces, and his chamber music.