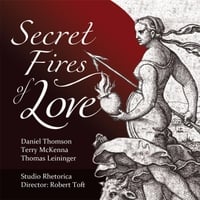 This recording is issued under the banner of Studio Rhetorica, a cover for the research work of Robert Toft, Canadian vocal coach and researcher, and this CD’s producer and musical director. The recording was planned to demonstrate examples of his research and approach to musical performance. To explain this, I quote from the extensive programme note on performance. This states that the performers (Australian tenor, Daniel Thomson, Canadian lutenist Terry McKenna, and German harpsichordist Thomas Leininger) “take a fresh approach to Renaissance and Baroque songs by treating the texts freely to transform inexpressive notation into passionate musical declamation. Daniel Thomson adopts the persona of a storyteller, and like singers of the past, he uses techniques of rhetorical delivery to re-create the natural style of performance listeners from the era would have heard (all the principles of performance Daniel employs are documented in period treatises on singing and speaking). This requires him to alter the written scores substantially, and his dramatic singing combines rhetoric and music in ways that have not been heard since the Renaissance and Baroque eras“. I suggest that several people would dispute the latter part of the final sentence.
The note continues with the explanation that “Daniel sings prosodically, emphasizing important words and giving the appropriate weight to accented and unaccented syllables; employs a highly articulated manner of phrasing; alters tempo frequently through rhythmic rubato and the quickening and slowing of the overall time; restores messa di voce, the swelling and diminishing of individual notes and across phrases, to its rightful place as the “soul of music” (Corri, The Singer’s Preceptor, 1810); contrasts the tonal qualities of chest and head voice as part of his expression; renders recitative in the half spoken/half sung manner common in the 18th century; applies portamento; and introduces a variety of graces and divisions into the songs“. Again, it is worth opining that many singing teachers over the past decades have been promoting exactly the same approach to musical interpretation.
Whilst the premise of the recording might raise some questioning eyebrows from other singing teachers and musicians, the fact remains that, whether or not this is a performing style that has “not been heard since the Renaissance and Baroque eras”, it remains a well thought-out and well-performed recording of two distinct periods of music from Italy and England.  The first half is devoted to the earlier repertoire, including Monteverdi, Caccini, Dowland and Campion, using lute accompaniment. The harpsichord takes over at track 11 for the second part of music by Purcell, Locke, Merula, Albinoni, and Tommaso Giordani. The CD reveals the trials and pleasures of intense love ranging from the “amorous yearnings for a country lass to the burning desires of tormented souls“.  The programme note explains that “during the era, vocalists personified songs to make the characters they represented actually seem to appear before listeners, personifications designed to move audiences to experience the very emotions they as performers felt. In a sense, the singers became the victims of love as they told their stories.”

The opening piece, Sì dolce è’l tormento, sets the mood beautifully, with Monteverdi expressing extreme emotions through a simple descending scale. Daniel Thomson, now based in the UK, sings with a light high tenor voice, that he uses expressively and musically. I particularly liked his interpretation of the earlier pieces, with lute accompaniment.

The recording is available online through the usual channels. Hard copies are also available for purchase for £15 (postage inclusive) at Daniel Thomson’s website.