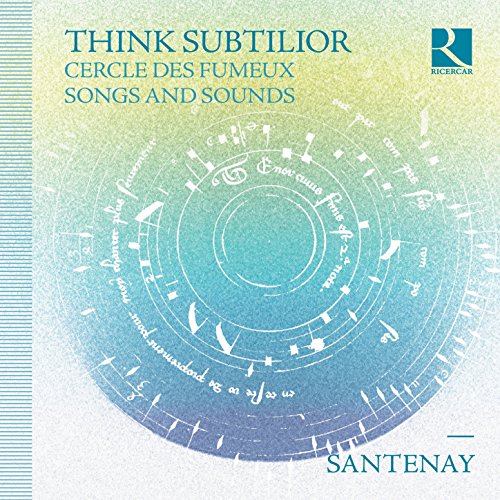 Ensemble Santenay is a group of four musicians who met during their studies of medieval music in Trossingen, Germany. Using the simplest of instrumentation (flute, fiddle, lute, and organetto) and one (soprano) singer, their approach to performance combines innovation with simplicity. Their choice of repertoire for this CD is apt: the so-called Arts Subtilior period from the end of the 14th-century. Stemming from the Parisian confraternity of ‘eccentric young intellectuals’, Cercle des fumeux, the style spread to Avignon, Northern Italy and Cyprus. Arts Subtilior uses simple but expertly crafted musical means and complex rhythms to express emotion. What Ensemble Santenay uniquely bring to the music is their esoteric introductions to several of the pieces: little soundscapes with titles like ‘haze, ephemeral, emanation, exhalation and perfume’. These are based on improvisations on some of the musical themes of the songs and the sounds of the instruments, all subjected to some technical wizardry by their musical produced Thor-Harald Johnsen. The longest, ’emanation’, lasts nearly three minutes and features the organetto phasing in and out of flute sounds within an atmospheric background.

There are two instrumental solos alongside vocal pieces by Hasprois, Solage, Cordier and Ciconia. Unusually for this repertoire, the melodic line switches between singer and instruments, the later taking up the section with no words set. Many groups performing this repertoire add text to the untexted lines, but I like this interpretation, both logically and musically.

An intelligent programme note introduces the music, and Santenay’s approach to performing it. It is one of those recordings that you can allow to just float around you. But it is equally rewarding when following the texts and the complex interweaved musical lines. Julla von Landsberg’s voice has just the simplicity and clarity needed to blend with the instruments. She also plays the organetto, along with fellow musicians Orí Harmelin, lute, Elodie Wiemer, recorders, and Szilárd Chereji, viella. My only criticism is that, at 51 minutes, this is a very short programme. That is a shame as the context and presentation is worth hearing more of.