The grandly monikered Royal Greenwich International Early Music Festival continues its recent flirtation with the more elevated, but not so Royal, Blackheath. Alongside their musical instrument exhibition in Blackheath Halls, a range of concerts and makers’ demonstrations takes place in local churches. I visited on the first day of the weekend festival, starting with a new innovation for the festival: Performance Platforms. These were held in a tiny Quaker Meeting House, too small to accommodate the audience, and with extremely unhelpful acoustics for performers and audience. My invitation to review described these afternoon events as “a platform for predominantly younger musicians to showcase their ability to a discerning audience”. I can’t comment on the audience, but the first of the two events certainly fitted the younger musicians descriptions.

The Purcell School is one of the principal specialist music schools in the UK. Located in Bushey, it caters for day and residential pupils from the age of 9 to 18 and nurtures some very talented young musicians, as was evident in this short concert. They opened, appropriately, with Purcell and three extracts from Abdelazer, including the Rondeau that Britten made famous. Their guest leader encouraged a rather inappropriate focus on gusto and power, rather than musical sensitivity and delicacy. To balance that, there followed a fine demonstration of musical sensitivity, and the outstanding talent of these fledgeling musicians, with Eliza Haskins’ outstanding performance of two movements of Vivaldi’s Concerto for recorder (RV 442). Eliza Haskins demonstrated a clear understanding of Baroque ornamentation in the Largo and real virtuosity (and an impressive grasp of articulation) in the Allegro Molto. I also liked the way she interacted with her fellow instrumentalists, making her interpretive intentions clear. Unfortunately, the programme note only included the first part of her name, so the audience will not be able to follow what is likely to be a promising future career. A tiny video clip of Eliza Haskins (pictured) playing the Vivaldi can be found here. 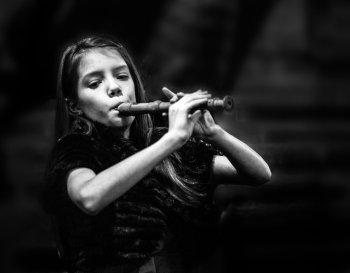 The final movement of Bach’s arrangement of his 4th Brandenburg Concerto as a harpsichord concerto (BWV 1057) followed, with Francesca Lauri as the harpsichord soloist and recorder players Daniel Swami and Leah Saltoun making significant contributions. Biber’s descriptive Battalia à 9 completed the programme, introduced by a storyline written by Jasmine Blackshaw-Britton, one of the viola players, but, despite the importance of girl-power, told by the (male) percussionist. This was led by the first violinist, who I think was probably Olivia Ziani, although the list of the violinists’ names put her name at the end. She dealt with instigated the complicated changes of mood and pulse well. I assume the audience realised that the section depicting the drunken soldiers is supposed to sound like that.

I have the utmost admiration for these young performers, many of whom will become household names in musical households. But, considering the long history of the school, and the importance of the early repertoire to all future professional performers, it was a surprise to learn that the Purcell School Baroque Ensemble was only founded in 2015. Even more surprising was that the young players were all using modern instruments and bows. The guest leader explained that she had very little time to rehearse with them (why?) and that she had told them to hold their bows further away from the frog and not to use vibrato. I hope these very talented young musicians eventually get the chance to experience the joys of period performance in rather more depth, and with period instruments, if not at Purcell School, then in their later conservatoire experience.

“Predominantly younger musicians” is perhaps not the best description of the members of the Morley College Recorder Consort, a collective of eleven people, most of them probably older than the grandparents of the Purcell School youngsters. The thought of listening to eleven amateur recorder players, some apparent beginners, might strike you as something you would pluck your own eyes out to avoid. But it did give a chance to learn some of the essential aspects of amateur ‘early music’ performance, something that usually only takes place between consenting adults in the privacy of their own homes, rather than in public. What we learnt from this demonstration can be summarised as –

In a festival dominated by recorders and recorder players, it was inevitable that the 11 recorders of the Morley College class would be followed by a concert with a further five recorders players. But, fortunately, the contrast couldn’t have been greater. From the first note of the concert by the Fontanella Recorder Quintet, it was clear that these five musicians were at the top of the performing tree. Their programme, The Nightingale’s Response was inspired by “the sights, senses and sounds of nature”, and the release of their latest CD of the same name. The music ranged from medieval hocketing (in Vaillant’s Par Maintes Foys) to a couple of jazz classics and a piece composed for the group by Tim Coker in 2013. His Wild Wood made use of the amplified percussive sounds of four rather odd-looking rectangular bass Paetzold recorders as an acoustic background to a solo recorder.

Much of the programme was of music from the Renaissance and Baroque eras, including arrangements by members of Fontanella (the name, incidentally, comes from the name of the often decorative bulbous covering to the keys at the bottom of bass recorders, rather than the soft tissue on top of a baby’s head). Pieces were introduced by all members of the group, and they even got the audience singing the round Hey Downe Downe of Ravenscroft’s song. This was a thoroughly professional presented and planned concert, played to the highest standards. A very welcome change from my earlier recorder experience.

Billed as “Exquisite Baroque Music with a modern twist” 21st Century Baroque blurred the boundaries between music and improvisation, notably of the jazz variety. Led from the harpsichord by the distinguished jazz pianist David Gordon, the eight players added distinctive flights of fancy to pieces by Lully, Telemann, Bach, Vivaldi as well as compositions by David Gordon himself. The opening extracts from Lully’s Le Bourgeois Gentilhomme Suite were followed by Telemann’s depiction of Les Turcs, Les Portugais, and Les Moscovites from the Ouverture Les Nations, each treated to some 21st Century Baroque additions. David Gordon’s 2015 ‘Romanesque’, Concerto for recorder, strings and harpsichord followed, its seven segued movements influenced by a French Romanesque Abbey. The shivers-down-the-spine opening section was followed by what sounded like the pitter-patter of raindrops, suggesting that the visit was made on a rainy winters day. A kaleidoscope of musical moods following, ranging from medieval conductus to contemporary jazz, each with challenging moments for the recorder soloist, including playing on two recorders at the same time.

The Romanesque concerto soloist was the undoubted star of the entire evening – the extraordinary young recorder virtuoso Charlotte Barbour-Condini. She was the first recorder player to reach the concerto final of the BBC Young Musician Competition (on her 16th birthday, in 2012) having already won the woodwind category. Since then she has added a first-class honours degree in History to her CV and is now holds a postgraduate scholarship at the Royal Academy of Music. Shortly after her BBC success, I reviewed her concert at the Spitalfields Festival, praising her “engaging stage persona and extraordinary musical ability” adding a reference to “An amazing and talented young woman . . . the audience came away humbled, entertained, instructed and amused.” Exactly the same sentiments apply to this concert. 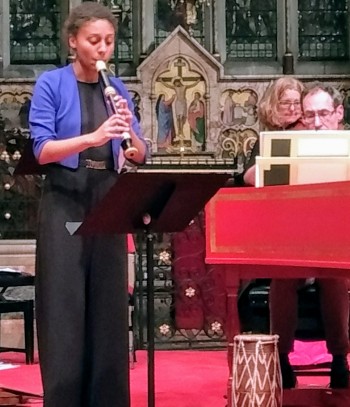 David Gordon’s own take on Bach’s 5th Brandenburg Concerto and his own Brandy for 4 followed, the latter a reference to Brandenburg 4 in jazz-tango style, a mood that continued in a 21st Century version of Vivaldi’s RV 202/441 reimagined as a violin/recorder/tango concerto, with Lucy Russell joining Charlotte Barbour-Condini as violin soloist. Incidentally, during the last two, Charlotte showed her talent as a percussionist and violinist. The sound of David Gordon’s melodica added a distinctive timbre to these pieces, albeit with Gordon having to transpose his contribution into Baroque pitch – not an easy thing to do. This concert demonstrated a very refreshing approach to re-interpreting classical music.