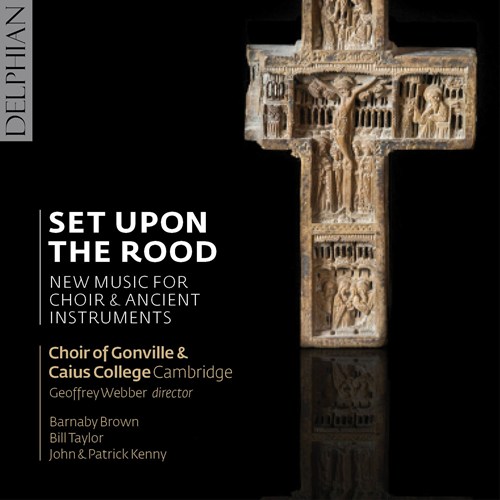 This recording features the music I heard in the second half of the concert reviewed here during the 2016 London Festival of Contemporary Church Music. The Choir of Gonville & Caius College, Cambridge and their director Geoffrey Webber join with four members of the European Music Archaeology Project: Barnaby Brown, playing the triplepipe and aulos, lyre player Bill Taylor and John and Patrick Kenny playing the ‘Loughnashade horn’ and carnyx.

James MacMillan’s powerful and evocative Noli Pater contrasts choir, organ, and triplepipes, played by Barnaby Brown. However, it comes with a word of warning. Although it made a very good start in the second half of the concert, it doesn’t work as the opening track on a CD. It starts with a very low quiet rumble from the organ that you might not even hear. And if you do, resist the temptation to increase the volume level – the volume soon gets very loud. I first listened to the CD on headphones on a train, and completely missed the opening bars. John Kenny’s The Deer’s Cry was given its first performance at the 2016 concert. It is based on the ‘St Patrick’s Breastplate’ poem and runs for a rather self-indulgent 16 minutes with John Kenny’s own proclamations and playing forming the core of the complex structure of the piece.

Stuart MacRae’s Cantata, based on Henry Vaughan’s poem ‘Man’, uses five solo voices alongside the choir and a wire-strung lyre tuned to a whole-note scale. His use of short overlapping phrases create a complex haunting and unsettling mood. In contrast, Bill Taylor’s Crux fidelis is the first of two simple hymn settings, impressively sung by soprano Clover Willis and baritone Humphrey Thompson to the accompaniment of a gut-strung lyre. The other hymn was Stevie Wishart’s Iste Confessor, an extract from her Vespers for St Hildegard, and based on an 8th century text. Over improvised lyre and chamber organ accompaniment, the voices pile up towards a confident concluding Amen.

Between the two short hymns comes Francis Grier’s impressive Cantemus, contrasting the distinctive sound of a bass Iona triplepipe with a double choir. The final work gave the recording its title, Set upon the Rood, composed by choir member Stephen Bick, combining his own baritone voice with the double choir, lyre, and aulos. Based on the medieval poem The Dream of the Rood, it combines evocations of death and victory.

Under their director Geoffrey Webber, The Choir of Gonville & Caius College, Cambridge have carved out an impressive reputation for exciting programmes of new and ancient music – and for very impressive singing from the young choir. This recording of contemporary compositions, many commissioned by the choir, combines old and new in imaginative ways. Quite apart from the encouragement to contemporary composers, the experience for the young student singers of the choir will be valuable in their future musical lives.