This is another in the series of recordings of French Baroque music directed by György Vashegyi with his own Purcell Choir and Orfeo Orchestra. It was recorded in Budapest’s Müpa concert hall alongside a performance given as the closing concert of the 2014 Budapest Spring Festival during the International Rameau Year, in conjunction with the Centre de Musique Baroque de Versailles. That was the modern-day première. Few would consider it Rameau’s finest opera, but in the true fashion of French Baroque opera, it is full of spectacular music.

Rameau’s ballet héroïque was composed in 1745 to a libretto by Louis de Cahusac. It was written to celebrate the French victory at the Battle of Fontenoy during the War of the Austrian Succession. It is an elaborate and sumptuous entertainment consisting of a Prologue and three entrées and an enormous variety of musical ideas and themes, including many dance sequences. The prologue, Le temple de Mémoire (“The Temple of Memory”), is an allegory highlighting the victory at Fontenoy, with La Victoire joining various muses to celebrate the French King. The first entrée, La fable (Legend) depicts the gods assisting Hercules to woe and marry Hebe, goddess of youth. The second, L’histoire (“History”), tells the story of the King of Syria, who gave up his fiancée when he learnt that his son was in love with her. The final entrée La féerie (“Fairy tale”) tells the oriental story of Argélie and Zimès.

The music is spectacular, the dramatic opening Ouverture just the start of a sequence of delightful and dramatic scenes, performed with considerable élan and panache by Vashegyi and his impressive Purcell Choir and Orfeo Orchestra, both of which are obviously well-versed in the French Baroque idiom. However, as with some other similar recordings, I do 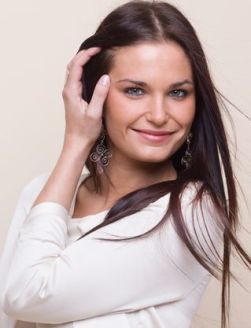 have problems with many of solo singers, many of which are French themselves, and are, I believe, provided through the collaboration of the Centre de Musique Baroque de Versailles. The main issue is excessive vibrato. For me this is always an issue in ‘early music’, but particularly so in the French Baroque where the delicacy of ornaments and their integration into the melodic line can be destroyed when the level and depth of vocal vibrato is the same as a trill. Of the sopranos, only the Hungarian soprano Emőke Baráth (pictured) manages to control her vibrato, and then only on occasions. But, that aside, she is excellent in her three roles. Of the men, Mathias Vidal, singing in that distinctively French haute contre voice, excels as he has on other similar recordings.

The Müpa concert hall (formally known as the Palace of Arts) is an impressive space, with excellent acoustics and, when used, as here, as a recording studio, also capable of an enormous range of acoustic treatments. On this recording however, there is rather too much reverberation, making the sound a little boomy, the clarity occasionally cloudy, and the choir sound rather distant.

The CD includes a detailed essay (in English, French, and German) about the music and the historical background by Benoît Dratwicki from the Centre de Musique Baroque de Versailles. You can hear some extracts here.