Some 28 years after their famed 1988 Archiv recording (made under studio conditions in Snape Maltings), the Monteverdi Choir and English Baroque Soloists return to the St. Matthew Passion. This extraordinary piece can evoke enormous emotional responses, regardless of the religious views of the listener. I vividly remember taking my young daughter to a performance of their 1988 Matthew, sitting in the front row, and watching the bass player just a few yards away gently shedding tears as she played. For this version, on their own label, they opt for a live recording, made in Pisa Cathedral during the Anima Mundi Festival as the culmination of a six-month tour.

I wonder whether I can detect a slight softening of Gardiner’s approach to music and, perhaps, musicians. He gives the singers slightly more time that has often been the case, and his interpretations are generally more subtle and subdued that hitherto. In fact, it is the quieter, more reflective, moments that stand out.

The entire work hinges on the role of the Evangelist, here sung by one of the finest interpreters of that role, James Gilchrist. His extraordinary ability to tell a story is revealed, for example, in the range of vocal timbres he uses in Und von der sechsten Stunde. Of the many other solo highlights (there are no fewer than 15 vocal soloists, plus the Evangelist and Jesus) I would pick out mezzo Eleanor Minney’s Erbarme dich, her voice sounding uncannily like a countertenor, blending beautifully with Kati Debretzeni’s exquisite violin, their subdued da capo a magical touch. Her Können Tränen meiner Wangen was equally impressive. I also liked Hannah Morrison’s Aus Liebe, in partnership with a hauntingly fluid flute melody from Rachel Beckett and Zoë Brookshaw’s Blute nur, du liebes Herz!

It is worth noting that the entire work was sung from memory, something lost when listening to a recording but undoubtedly a key part of the live experience, and the singers’ experience. I am not sure if the Monteverdi Choir have attempted this before but Jonathan Sells, one of the bass soloists in his other role a musical director, has made use of performances from memory for some years with Solomon’s Knot. 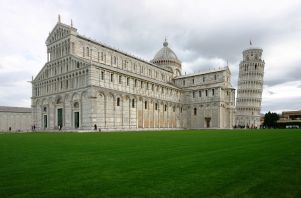 How ever impressive the performance is, I have some concerns about the recording quality. I didn’t initially notice that it was recorded live in Pisa Cathedral (pictured), an enormous acoustic, assuming it to be a studio recording in a fairly dry acoustic. I can only guess that the whole thing was recorded with lots of close microphones. But the mixing sometimes makes it sound as though the different parts (two choirs, two orchestras, boys choir, vocal and instrumental soloists) are in different acoustics and spaces. There is no real sense of the acoustic of the space although, with the acoustics in a building as large as Pisa Cathedral, there were always going to be problems in recording. There is only one day noted for the recording, so there would be little or no time for ‘patching’ and, presumably, no back-up recording to cover slips or audience noise. That said, the performances are remarkably accurate, and there is a complete lack of any audible sound from the audience, perhaps reinforcing the notion of close-miking.

As well as the full sung texts (with English and French translations), the booklet includes an introduction and ‘tour notes’ by Gardiner, the latter written before and during their 6-month international tour and acting as, presumably, moral boosting homilies to his assembled musicians. The two CDs are both about 80 minutes long, dividing after the Chorale Wer hat dich so geschlagen.