Girolamo Frescobaldi is one of the most important composers of the transitional period between the late Renaissance and the early Baroque. His keyboard music and his written performing instructions form the bedrock of the 17th century Baroque style, in particular the Stylus phantasticus that dominated the musical style in Italy and Germany. Through pupils like Froberger and other disciples, his music spread throughout Europe and influenced composer, including Bach and his North German organ composer predecessors like Weckmann, Tunder and Buxtehude and English composers like John Blow. 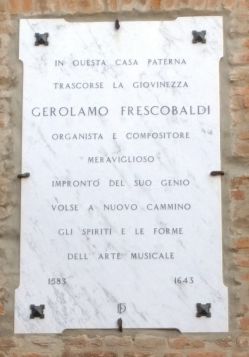 He was born in Ferrara in 1583 at a time when the Court of the d’Este Dukes of Ferrara was the musical centre of Europe. He main teacher, Luzzasco Luzzaschi, was organist at the d’Este court, and Gesualdo was also musically and by marriage connected with the d’Estes. He moved to Rome in 1604 after the demise of the Ferrara court, and most of his subsequent musical life was based there.

Although most of his organ works are based on the Renaissance polyphonic tradition, he added an advanced level of expression, ornamentation, flexibility of pulse and metre, in a style strongly linked to Monteverdi’s Seconda pratica. The world of early opera and vocal music is never far away, and he wrote that musicians should play con affetti cantabili (in the style of singing). The advanced technical virtuosity required in many of his pieces became fundamental to the later keyboard repertoire. Frescobaldi recognised that difficulties he was giving players – one piece ends with the comment non senza fatiga si giunge al fine (the end is not reached without fatigue).

This recording features a cross section of Frescobaldi’s organ output from 1615 to 1635, played on three contrasting organs, dating from 1509 to c1600. Also included are three vocal motets, sung by soprano Alice Foccroulle. Cornetto player Lambert Colson also contributes in place of Frescobaldi’s suggestion that the organist should sing a brief motif at intervals during a Recercar.

The instruments chosen are particular relevant in that they are from the Roman tradition rather than the more often heard Northern Italian organs. The sound is slightly less ‘vocal’ and the pitch is a whole tone lower.  The excellent programme notes give detailed information about the music and the organs, and specifications are also included. The sound of the 1509 organ in San Francesco in Trevi is a particularly attractive example of a late Gothic organ. His playing is exemplary.

More information, and a link to the programme notes can be found here.