The intriguing title of Laura Schmid’s recital is a German word that means something like ‘robbery’ or ‘stolen goods’. It connects two words, with contrasting positive and negative meanings. It was the basis to Laura’s recital (given as a result of her winning the 2015 Moeck/Society of Recorder Players Solo Recorder Playing Competition) which featured music appropriated and recreated in the 18th century by other composers from France, Italy and Germany.The opening Sonata (Op.5/11) by Corelli was the sort of piece than many recorder players would have used as a 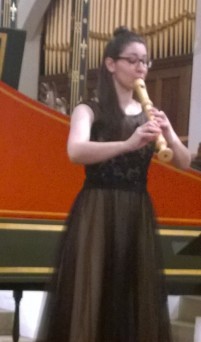 concluding showstopper, such were the technical demands of this version with its extraordinary added ornaments. There cannot be many better tests of Laura Schmid’s virtuosity and musical acumen, and she passed with honours. Throughout her recital I was impressed with her articulation, accuracy, agility, breath control, and her impressive use of ornaments.

Other pieces included a ‘Sonata’ made up from various Vivaldi violin and cello sonatas and a version of one of Bach’s French Suites for harpsichord arranged for solo recorder (arranged by Michael Form, one of Laura’s teachers); one of Sieber’s re-workings of Vivaldi; a fine Sonata in A by Veracini, reworked by another composer, with Veracini’s blessing; and a couple of pieces from the Airs et Brunettes ornez d’agrémens by Hotterterre le Romain.

This was a very impressive performance from Laura Schmid, not least because it was given in a very cold church. I was less impressed with the harpsichord accompanist, who played far too loudly for most of the recital, and added far too many notes to her continuo realisations, adding to the volume and drawing attention away from the recorder soloist, whose concert it was. I also thought it rather inappropriate that the accompanist leapt to her feet to join the applause for the soloist, rather than wait for the usual invitation.