La Serenissima have set out on a musical version of the 18th century Grand Tour of Italy, with a series of 6 concerts at St John’s, Smith Square. The started their tour with a concert in September devoted to music from Venice, their usual musical home, and for this concert travelled on to Verona and Bologna. The concert was in two distinct parts, starting with music performed in the enormous Basilica of San Petronio in Bologna, at the time the 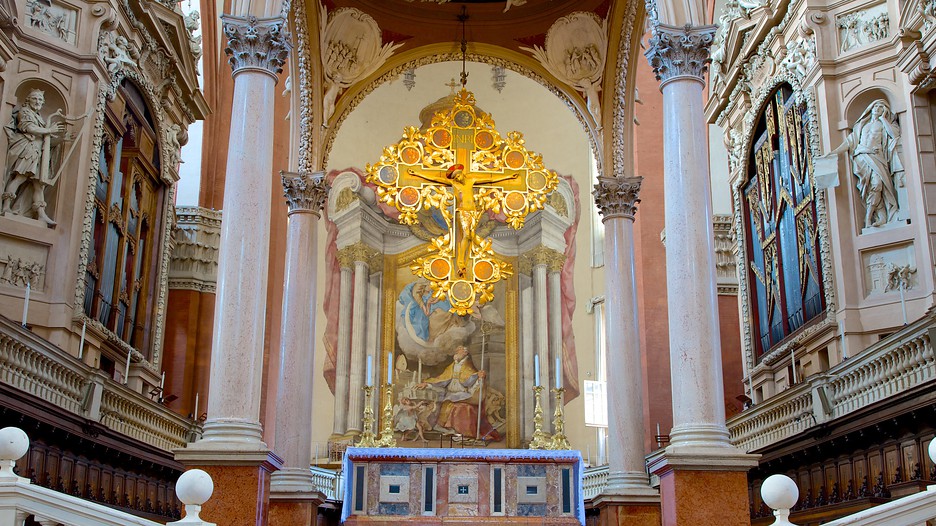 largest church in Christendom. Well before the completion of the Basilica, a musical foundation had been established (in 1436), and in 1476 a magnificent organ was built on one side of the choir. This was enlarged, and a corresponding organ added to the gallery on the other side of the choir, in 1596. Both organs survive to this day, in more-or-less original condition, and are amongst the most important surviving historic organs in the world.

In San Petronio, music was performed from the organ galleries, using the music desks built into the gallery frontage, and using the large organs as accompaniment to the singers and instrumentalists. Music was therefore generally intended to be performed antiphonally, with groups of musicians on both sides of the choir. The enormous acoustic meant that composers and organists needed to adopt a relatively sedate harmonic structure. For their performance La Serenissima avoided the temptation to have all the seating of St John’s, Smith Square turned around to face the large organ and galleries at the usual back of the concert hall, although this would have enabled them to have given a particularly ‘authentic’ idea of the way the music was performed, from side galleries, using a large church organ rather than a little box chamber organ.

Giuseppe Torelli (1658-1709) and Giovanni Battista Bononcini (1670-1747) were composing for San Petronio at a time when the musical establishment there had reached enormous proportions, with up to 150 musicians involved on special occasions. Torelli was born in Verona, but spent the last years of his life in Bologna. He is best known today for his compositions for trumpet, here represented by a Concerto and a Sinfonia for two trumpets and string orchestra. In both cases, the trumpets (here played by Simon Munday and Matthew Wells) only played in the Allegro movements, having a rest during the extended three-part central movements with their lively Allegros for two violins enclosed within Adagio sections. A similar trumpet-based Sinfonio by Bononcini completed the first half, following two Sinfonias ‘in due cori‘, obviously intended to be performed from the two opposing galleries of San Petronio. Although the separation between the two groups of musicians was apparent, a wider separation on the stage might have been more realistic to the original intention.

The second half explore music by Brescianello and Dall’Abaco, composing at about the same time as Bononcini but in a slightly more advanced style. Brescianello’s Concerto VII for violin and strings featured some virtuoso playing from Adrian Chandler, notable in the wide leaps across the strings in the final Allegro. The central Adagio was Vivaldian in style, with a soaring melody over repeated chords on violins and viola, with no continuo bass. Along with the exciting final Chaconne, these pieces were probably composed and performed north of the Alps in Munich or Stuttgart.

Dall’Abaco’s two Concertos were entitled ‘da chiesa‘, indicating instrumental music that was performed during  services. The Concerto XI for cello was particularly interesting, with its frequent little cadences, and with the solo cello often paired with another cello or violin. The soloist was Vladimiar Waltham.