It would take a brave barrister to defend a serial rapist with the argument that “his gigantic passion beautifies and develops its object, who flushes in enhanced beauty by its reflection”. But that was one of the many attempts by 19th century commentators to interpret Mozart’s Don Giovanni in the light of their yearnings for the romantic hero, in this case from, the Swedish philosopher, Søren Keirkegaard in his discussion of aesthetic and ethics in the pseudonymous Either/Or. He goes on to refer to the Don as “the very incarnation of sensuous passion and desire” and a “simple, exuberant, uncomplicated, unreflective man”. Nowadays we are more likely to be reminded of The Archers’ Rob Titchener, Donald Trump, and the likes of Jimmy Savile and that ilk. In that vein, it is usually overlooked that the full title of the opera is Il dissoluto punito ossia il Don Giovanni – The Libertine (or Rake) Punished, namely Don Giovanni.

The conflict between opera seria and opera buffa is rarely more pronounced than in Don Giovanni. Late in life, the librettist da Ponte confided that Mozart wanted to outline the essentially tragic side of the story, whilst da Ponte, with his eye on future box office takings, favoured the comedic buffa approach. Da Ponte labelled the result as the compromise dramma giocoso. This clash of opposites is one of the complicating factors in getting to grips with the development of the plot. Incidentally, another often overlooked fact is that, while he was writing the libretto, the 37 year old da Ponte had his sixteen year old mistress as his muse. He had already been banned from Venice for 15 years for having a brace of children by his then mistress, despite being an ordained Catholic priest.

It is with some trepidation that a new production of Don Giovanni is approached. On this occasion, English National Opera’s director Richard Jones adopted a relatively simple staging, albeit with rather too many doors. There is practically no decoration in Paul Steinberg’s rather drab series of flats, manoeuvred into various formations to suit the action – or, in some case, to rather confuse the action, not least when one of the only wall ornaments fell off the wall. Nicky Gillibrand’s costumes are similarly understated. ‘Man at C&A’ suits for the men, with the Don in a particularly cheap looking shiny affair, and timelessly dull black for all the women apart from Zerlina, who remained in her wedding whites throughout, and an extra-curricular non-singing actress in grey. The timing was, mercifully, before the age of mobile phones, but well into the age of Bakelite phones and phone boxes. 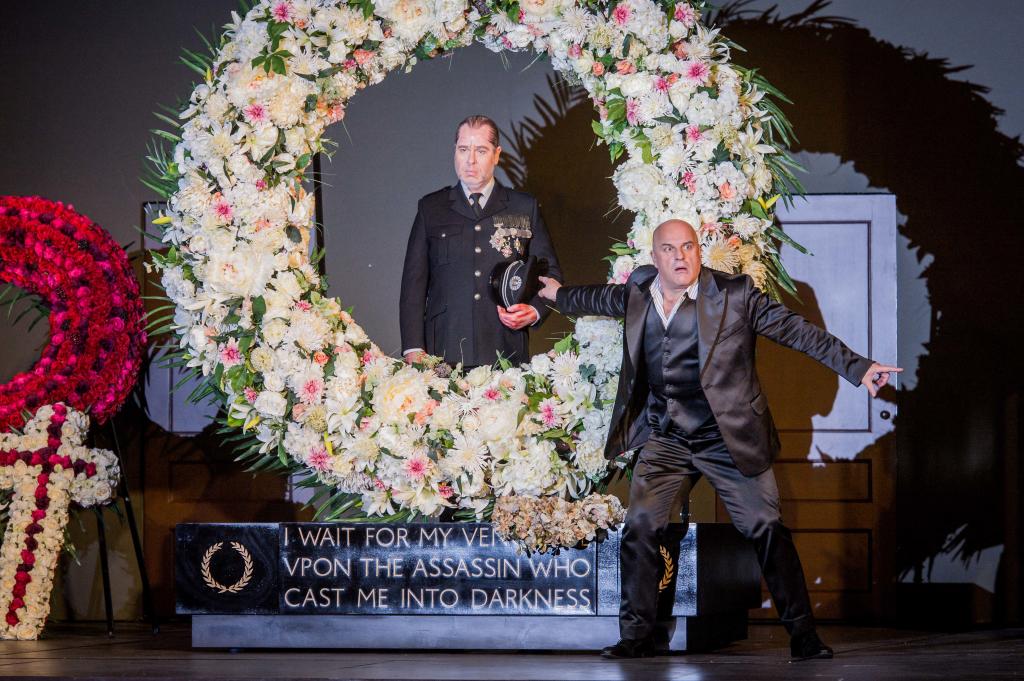 Richard Jones generally accented the tragic aspects of the tale, with only Leporello as the only comedy character. Rather than emphasising the class clash of the Age of Enlightenment, Jone also downplayed the class aspects of the libretto, with all three wronged women appearing to be relatively classless. What differentiated them was their response to Don Giovanni. Donna Anna (Caitlin Lynch) remained staunchly bent on revenge; Christine Rice’s Donna Elvira was driven mad by thoughts of revenge, while Mary Bevan’s excellent portrayal of Zerlina focussed on the inner strength of the young woman, despite her obviously conflicting inner thoughts.

Whatever thoughts the director’s interpretation generated, musically this was excellent. The ENO orchestra was on very good form under conductor Mark Wigglesworth. The singing was similarly excellent, with some notable performances from the men, notably Christopher Purves as the (in this case, aging) Don, with Clive Bayley making a fine foil as Leporello. Nicholas Crawley and Allan Clayton were the hapless Mesetto and Don Ottavio, while James Creswell had his key opening and closing moments as the Commendatore.