With the departure of the ‘friends’, the Fitzwilliam Quartet continued with Purcell’s Fantazia 7 followed by three of the specially commissioned new pieces based on Purcell’s fantasias. The Purcell original segued almost imperceptibly into the Double on Fantazia No 7 by Purcell by Marcus Barcham Stevens (the second violinist in the Quartet), a piece based on the Baroque concept of a ‘Double’, or variation. Intense contemporary harmonies came in and out of phase with snatches of Purcell’s original music before resolving onto a beautifully pure final cadence. The London premiere of Jackson Hill’s 2010 Ghosts, a piece built on a recurring hypnotic rocking motif that dissolved into a magical cadence of harmonics. 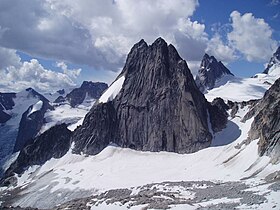 The third new piece was the world premiere of Rachel Stott’s The Purcell Range, composed a few months ago while the composer was (quite understandably) “suffering from post-Referendum despondency”. Combining elements of Purcell’s 8th Fantazia with contemplation of “the timeless majesty of mountains”, Rachel Stott derived the melodic contours from the outlines of the Canadian Purcell Range of mountains. Each section was based on one of the colourfully named peaks, including Snowpatch Peak (pictured), Hound’s Tooth, Bugadoo Spire, and the Leaning Towers, interspersed with evocative depictions of turbulent mountain weather. A fascinating work, and an enterprising series of commissions from the the Fitzwilliam Quartet.

The ‘friends’ returned after the interval for Pergolesi’s famous Stabat Mater, the programme notes helpfully explaining Pergolesi’s musical use of religious imagery that can, to modern ears, sound rather inappropriately jaunty. The voices of Julia Doyle

and Clare Wilkinson (pictured) blended together perfectly, as did the compelling musical interaction between them, making this a true duet, rather than a work for two soloists. As with their singing of the Purcell songs, it was clear that they were both fully absorbing the texts. I didn’t get the impression that Clare Wilkinson’s voice was doing quite what she had wanted it to do in the first half, but she was much closer to her usual excellence in this piece. On this occasion, it was the strings that occasionally sounded a little short of ideal intonation. In this, and in the opening Purcell sequences, Laurence Cummings provided some very effective and well-behaved continuo realisations on harpsichord and organ.