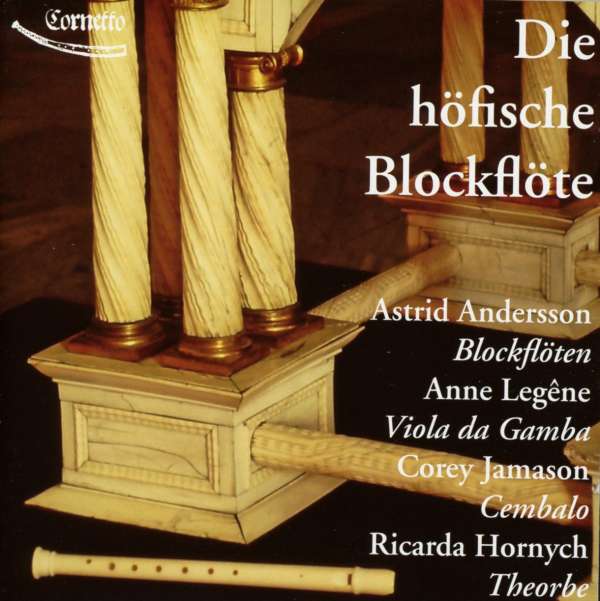 Using modern copies of seven different types of historic recorder (blockflöte), Die höfische Blockflöte (The Royal Recorder) explores the link between musical instrument making and the various royal courts of Europe. The recorders range from two different versions of the two mid-17th century Rosenborg soprano recorders, one made in maple, the other (at higher pitch) in the original material, narwhale tusk, both made by Fred Morgan. The originals are to be found amongst the Crown Jewels in the Royal Collection in Rosenborg Castle, Copenhagen. It can bee heard in Jacob Van Eyck’s Prins Robberts Masco.

One of the most distinctive sounds is that of the Voice Flute, a recorder pitched in D, sounding somewhere between an alto and tenor recorder and sounding at the same pitch as a flute. It is demonstrated in Suites by Hotteterre and Dieupart, on both occasions accompanied by theorbo. Three different alto recorders are also demonstrated, one a copy of a Bizey example now in Washington at the French opera pitch of A 392. The other two are copies of examples by Peter Bressan . The oldest instrument copied is a Ganassi soprano recorder dating from the early 16th century, and used in Johann Shop’s Lachrime Pavaen.

As well as being of interest for recorder players for the various instruments used, this is an attractive programme of music from the 17th and early 18th century. Astrid Andersson is accompanied by Anne Legene, viola da gamba, Corey Jamason, harpsichord, and Ricarda Hornych, theorbo.