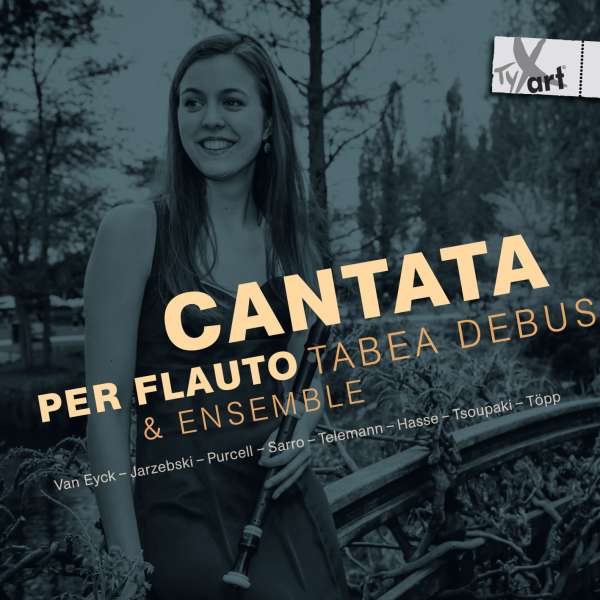 Following her first CD, Upon a Ground (reviewed here), recorder player Tabea Debus here works with a larger group of instruments and with a wider range of music, including two pieces by present-day composers.  The first track (the opening of Hasse’s Cantata per Flauto – a recent discovery, found in the collection of the Viceroy of Naples) sets the mood perfectly, and makes it absolutely clear why you will love this CD. Tabea Debus’s spirited, virtuosic and musically compelling playing is immediately obvious, as is her evident sense of humour, demonstrated in this case by an extraordinary sense of articulation and phrasing and a lovely little cadenza. In the second movement Adagio, the recorder weaves a complex musical line, elaborated by ornaments (many presumably improvised) in the manner of an operatic aria. This reflects the CD’s title and principal focus: of the recorder as a ‘singing’ or ‘vocal’ instrument, closely linked to the human voice, and the importance of the underlying text, whether or not there actually is one. A well-argued programme essay, presumably written by Tabea Debus herself, expands on this theme.

The rest of the programme alternates pieces for solo recorder (seven are used) with those for recorder with the accompaniment of a varied continuo group or a small string orchestra. The provenance of all the instruments is noted in the programme notes, and includes several 18th century originals. In contrast to the jovial Hasse Cantata, the following work is Calliope Tsoupaki’s Charavgi (‘Dawn’), an evocative piece for solo Renaissance alto recorder, dating from 1994. This includes examples of combining speech with a recorder, the added vocal sounds used to create a one-person duet. The other modern piece is Thorsten Töpp’s 2005 a due, a ‘double portrait’ for tenor recorder and cello (played by Lea Rahel Bader), again with imaginative use of the sounds possible from both instruments, including singing and breathing, without tone, into the recorder –which is how the piece starts.

The pieces with string orchestra are a little concerto by Domenico Natale Sarro, possibly intended for performance during an interlude in a Neapolitan opera, and Telemann’s more substantial Concerto in C for alto recorder, strings and basso continuo, the four movements interpreted as a mini-opera with a “song full of love, loss and longing’ at its emotional core.

Examples of the practice of ‘diminutions’ on a pre-existing vocal work are heard with van Eyck’s elegant and increasingly lively variations (published in 1648) on the English song ‘Come again, sweet love doth now invite’ (which opens with a lovely theorbo introduction from Kohei Ota) and again in Jarzebski’s gentler diminutions on Diligam Te Domine and Venite Exultemus, based on pieces by Striggio and Palestrina. Although such diminutions are clearly intended for instrumental performance, Tabea Debus accents the singing quality of the musical line. The Jarzebski pieces feature fine organ and gamba continuo accompaniments.

The CD finishes with a beautiful version of Purcell’s Evening Hymn. An outstanding recording by a talented young musician.

The CD is released in Germany on 8 April, and will be released in the UK in early May. There is a London CD release concert at St John’s, Smith Sq on Sunday 10 April at 3pm as part of their Young Artist series. More information here.