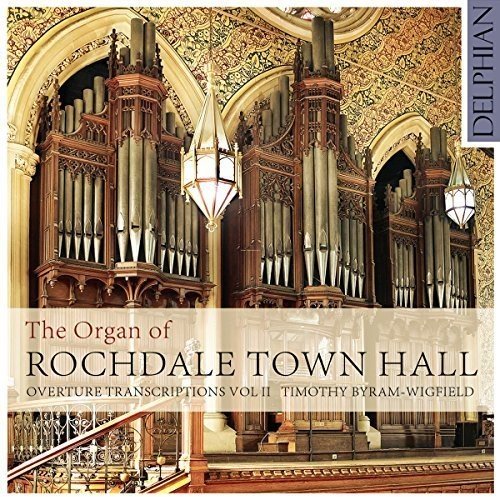 The story of the British Town Hall organ is a bit of a sideline of European organ history, but it is one worth exploring. The use of organs to promote civic pride and usurp their neighbours was not new in organ history – in 17th century Netherlands, for example, the main church organs were owned by the town, not the church, and a similar competitiveness is evident. The initial inspiration in Britain seems to have come from the increasingly large choral societies, their own roots going back to the enormous late 18th century Handel Commemoration Concerts. Such large vocal forces rehearsed and performed in the sumptuous Victorian Town Halls, notably in the emerging industrial powerhouses of the Midlands and North, but also in more southerly places like Reading. Some of the largest British organs are housed in such places, and they soon generated their own tradition of (often Sunday afternoon) virtuoso recitals which consisted largely of transcriptions of orchestral music.

Rochdale was a late arrival on the town hall organ scene. The hall was opened in 1871, but its organ was not installed until 42 years later, in 1913. It was built by the Leeds firm of Binns, and is similar to their earlier organ in Nottingham’s Albert Hall. It has four manuals and 53 speaking stops. Some work to the internal mechanics was done in the late 1970s but, despite the rather naughty prominent name plate of that restorer on the console, in remains much as it was when Binns built it. It is a powerful organ, with roots in the German rather than French symphonic tradition. Although clearly designed to reflect the full range of orchestral colours and instruments, it also has strong and clear principal choruses, as heard in the transcriptions of Bach and Handel on this recording, notably the latter’s Overture to Ptolemy with its exhilarating fugue.

The other overtures are firmly in the Romantic tradition, both of original composition, and of transcription style. We hear examples from the doyens of Victorian organ performance, William Best and Edwin Lemare, as well as one (Verdi’s Prelude to La Traviata) transcribed by the soloist, Timothy Byram-Wingfield, a much needed moment of repose in an otherwise pretty powerful sequence of pieces – and an example of the recent rise of interest in this repertoire. This is followed by a dramatic version of Weber’s Overture to Oberon, before the concluding highlight; Lemare’s transcription of Tchaikovsky’s Overture-Fantasie: Roméo et Juliette, an extraordinary tour de force of musical and technical virtuosity. Organist-composers like Lemare were devoted to demonstrating their own playing skills and performing and publishing works that seemed impossible to play was part of that promotional mystique. Timothy Byram-Wingfield is well up to the task, technically and musically: he explains some of the difficulties he encountered in his detailed programme notes, including a sample of what could be called ‘extreme thumbing down’ (playing on two manuals with one hand).

Details of the organ can be found here.