“To make divine things humans and human things divine – such is Bach, the greatest and purist moment in music of all time”. This quote on the ‘miracle of Bach’ from Pablo Casals was mentioned in the programme note setting the concert in context. Built around two of Bach lesser known Lutheran Masses (Missa Brevis), the evening 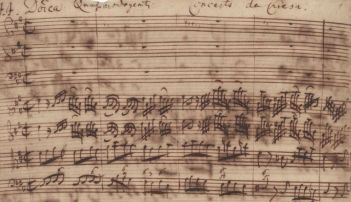 opening with Bach bustling Sinfonia from the cantata Am Adend aber desselbigen Sabbats, composed in 1725, the lengthy instrumental opening (pictured) was apparently intended to give the singers a bit of a break after a busy week. It has a jovial, extended and rather convoluted initial theme which bubbles along until a concluding, and very clever, skipped beat. A conversation between strings and two oboes and bassoon, this is the type of piece that Bach probably scribbled down before breakfast but, 300 years later, stands as an extraordinary example of his genius and skill at turning a string of notes into something inspired and divine.

The other instrumental work was Brandenburg 2, with its notorious discussion between the unlikely combination of clarino trumpet, recorder, oboe, and violin. Incidentally, 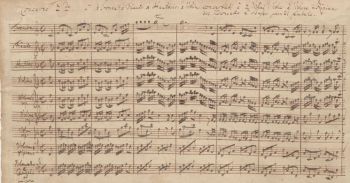 the first movement of this would be the first thing any alien civilisations would hear if they managed to work out how play the long-playing record sent into space on the 1977 Voyager 1 spacecraft. Apart from her little solo spot near the start, Pamela Thorby’s recorder struggled to be heard when set against David Blackadder’s stratospheric trumpet in the first movement, despite her valiant efforts of using tonguing to give an initial attack to her notes. But she shone in the central movement, where the cello (played by the always excellent Luise Buchberger) also joins the line-up of soloists. Daniel Lanthier and Matthew Truscott (oboe and violin) completed the soloist line-up. As is often the case, Bach ends the piece with a quaver and a rest, which conductor/harpsichordist John Butt interpreted as a rather cheeky and almost staccato note, despite the fact that in the autograph score the final note has a fermata marking which should probably have extended, rather than shortened it. But it was forgivable fun.

The Lutheran Masses 3 & 4 (in G minor and major) were composed around 1738, both reusing music from previously composed cantatas. Bach only sets the words of the Kyrie and Gloria, the latter in contrasting and broadly symmetrical five movements.

The shorter G minor setting (BWV 235) is a concentrated essay in musical form, with solos from the bass, alto and tenor during the Gloria and an ebullient concluding fugue. The larger scale G major setting (BWV 236) opens with an imposing fugue, opening with the bass entry, the continuo bass line hinting at various harmonic twists and turns. The sections of the Gloria ratchet up the musical tension, with solos from the bass and tenor and a central duet for soprano and alto, the latter with a busy cello line. As with the previous mass setting, the oboe has prominent solo parts, played well by Daniel Lanthier.

The four singers were Mary Bevan, Mag Bragle, Thomas Hobbs and Edward Grint; a good selection not least for the slightly different vocal tones that nonetheless blended well in the chorus sections. The OAE were on top form, with excellent contributions, notably from cellist Luise Buchberger and long-serving double-bass player who doubled the complex cello lines on many occasions. They both also added to the fun by their very evident enjoyment of the music.

This concert would normally have been held in Queen Elizabeth Hall but during its restoration, concerts have been transferred to St John’s, Smith Sq, gaining from it very suitable acoustic. The OAE audience now seem to have got used to the fact that their SJSS concerts start at 7, rather than the more usual SJSS starting time of 7.30. The fascinating OAE Extras pre-concert talk featured Pamela Thorby and David Blackadder, both inspiring interpreters of their respective instruments. Amongst other gems was the revelation that Pamela Thorby’s musical life started as a trombonist.