Christ’s Chapel of Alleyn’s College of God’s Gift in Dulwich was consecrated 400 years ago, in 1616. The chapel and adjoining almshouses were the first of the charity foundations set up by the wealthy actor, Edward Alleyn, owner of the manor of Dulwich.  Shortly afterwards, the foundation’s status as a educational college was confirmed, leading to the present day Dulwich College.

At about the same 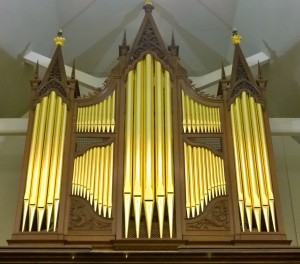 time the Chapel’s first organ was installed. In 1760 it was replaced by a new organ by George England which, despite the usual additions and alterations over the years, still survives with a considerable amount of mid- 18th century pipework and a fine Gothick case. In 2009 it was restored back to its 1760 state (with modest additions) by the UK’s leading specialist on historic organs, William Drake. The original pitch (A430) and modified fifth-comma meantone temperament was restored.  It is now one of the most important historic instruments in the UK.

The Chapel arranges a regular monthly series of 45 minute Sunday evening organ recitals, the latest of which was given by the prizewinning Greek organist, Ourania Gassiou, organist of the Athens Concert Hall and the French Protestant Church in London. Her programme didn’t include any English music, but it did explore the North and Central European organ repertoire from the 150 or so years leading up to the time of the organ. She opened with the piece closest to 1760, CPE Bach’s jovial Sonata in G minor, written for his pupil, the musical Princess Amalia of Prussia, and intended for an organ that still exists in Berlin. She followed this by Böhm’s gorgeous setting of the choral Vater Unser in Himmelreich, with its richly ornamented chorale theme and accompaniment which, incidentally, might not be Böhm’s original intention.

One of Froberger’s best-known and influential Toccatas was followed by the opening Suite from Johann Caspar Ferdinand Fischer’s 1738 publication Musicalischer Parnassus, a collection of keyboard suites each dedicated to one of the nine muses, daughters of Zeus. Although Ourania Gassiou’s own name refers to one of the muses, she chose to play the opening suite, named after Clio, the Greek muse of history – or, in some mythologies, lyre playing. Although intended for harpsichord, this worked well on the organ, particularly with Ourania Gassiou’s well-chosen registrations.

It was followed by the meditative Capriccio desperato by Gottlieb Muffat (son of the more famous Georg), also probably intended for harpsichord. The earliest piece in the programme was Sweelinck’s Echo Fantasia in the Aeolian mode. Ourania Gassio finished her recital with Bach’s Prelude and Fugue in A minor, a piece that could not have been played on the original 1760 organ because of the lack of pedals on English organs of that period. This was a powerful performance, with an accent on rhythmic propulsion and clarity of counterpoint. This was a fine recital, demonstrating Ourania Gassio’s appreciation of different styles of composition. She also showed the suitability of the Dulwich organ for a wide range of early music of very different styles.

Further information about the organ can be found here. Future concerts in the Chapel can be found here. On Sunday 10 July at 7.45pm, I will be giving a special hour-long recital to celebrate the 400th anniversary of the Chapel, featuring English and European music all composed around 1616. Further details will be posted here nearer the time. As with all the Chapel concerts, admission is free, but offerings are requested, not least because post-concert refreshments are offered.