Jacques van Oortmerssen was one of the most influential organists and organ teachers of his generation. His untimely death on Saturday 21 November is a great loss to music. In his memory, I am posting extracts from some of my reviews of his Bach organ CDs.

“Jacques Van Oortmerssen is one of the most gifted performers of Bach around. His playing and musical interpretation are quite superb. Although his performances are always personal and from the heart, he doesn’t impose on the music or come between the composer and the listener. He interprets, rather than merely performs. His sense of musical style, and the techniques of organ touch and articulation that are needed to bring life to organ music, make for playing of immense maturity. His Bach is grown-up Bach.”
Bach Complete Organ Works  Vol 3 (Vanguard).

“… if anybody need one track to convince you of the power of this playing, listen to track 8: Bach’s homage to De Grigny, the Fantasia in c (562) played with majestic control that produces an unleashing of almost unbearable emotional intensity and spiritual power. This is Bach as God intended.”
Bach Complete Organ Works  Vol 4 (Vanguard).

“… it is players with the intuition and flexibility to move with the times that are often the most successful interpreters.  Jacques van Oortmerssen is one such player … during the course of this Bach series, van Oortmerssen has showed himself to be increasingly capable of projecting the most intimate and complex of musical thoughts. He has developed an intelligent musical fluidity and freedom in his playing which puts him at the peak of Bach interpreters, a position he has long held as a teacher. This is playing of the utmost maturity.”
Bach  Complete Organ Works  Vol 5 (Vanguard).

“As the series has progressed, there has been more of a relaxed fluidity to the playing, pointing up both smaller details (or example the solo pedal lines that opens the Praeludium in a minor) as well as larger-scale architectural structures in, for example, the monumental Passacaglia in c minor.”
Bach  Complete Organ Works  Vol 6 (Challenge). 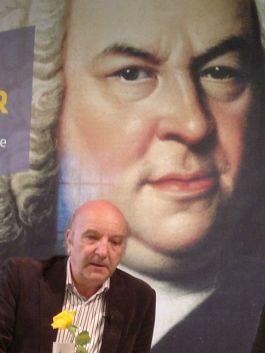 “Oortmerssen’s interpretations are thoughtful and revealing. He has something to say, but the roots of his interpretations are clearly found within the text of the music. For example, the rather abrupt ending to the final chord of track 2 (Praeludium und Fuga in C 547) might surprise some listeners, but it is a feature of the score that players often overlook.”
Bach  Complete Organ Works  Vol 7 (Challenge).

“… the latest contribution continues to reinforce my view that Jacques van Oortmerssen is the finest interpreter of Bach’s organ music around. His musical insight into these complex works is extraordinary. Unlike many recordings, where the performer feels the need to ladle on his own ‘personality’ in spades, each piece of this, and all the earlier volumes, repays repeated listening, each time revealing a new insight.  What I love about these interpretations is the feeling that I get that this is all about Bach, not about the performer – and this goes beyond mere respect for the text and appropriate period registration, articulation and musical structuring.”
Bach  Complete Organ Works  Vol 8 (Challenge)

These reviews were previously published in Early Music Review. Detail of these, and all Jacques’ other CDs can be found here.