It was entirely appropriate that this concert, given under the auspices of The Handel Friends, should take place in Handel’s own church of St George’s, Hanover Square, just round the corner from his surviving home. After 30-minutes of instrumental music and sumptuous interval refreshments (all part of the deal) came an inspirational performance of Handel’s pastoral cantata Aminta e Fillide, performed with the soprano duo Fair Oriana (Angela Hicks & Penelope Appleyard).

Amadigi di Gaula (HWV 11) is a rarely performed early opera by Handel, composed in 1715 while he was staying at Burlington House (pictured), the London home of the young Earl of Burlington, Richard Boyle. It is now, in altered form, the home of the Royal Academy. Boyle had inherited the house and adjoining estate aged 10. He was around 9 years younger than Handel and was to become an influential amateur architect in Georgian London, notably for Chiswick House. By 1715, he had already completed the first of his ‘Grand Tours’ and was fast becoming a major patron of the arts and music.

Amadigi di Gaula is a curious and complex tale, based on a late 14th-century Castillian chivalric fantasy romance that also inspired Don Quixote. The tale involves Princess Oriana (not to be confused with the hero of Felix the Cat), a fictional heiress to the throne of England (the ‘Fortunate Isles’) and her protector knight, the Scottish born Amadigi of Gaul, who is love with her, as is his companion Dardano, Prince of Thrace. The evil sorceress Melissa is infatuated with Amadigi. To this end, she imprisons Oriana in a tower and Amadigi and Dardano in a nearby garden. She tries various spells to attract Amadigi, who, initially together with Dardano, is trying to rescue Oriana. After a complex series of deceptions, betrayals, jealousy and sorcery, Amadigi and Oriana are finally united, but not before Amadigi has killed Dardano and Melisa has stabbed herself as her supernatural powers fail against the power of love.

END_OF_DOCUMENT_TOKEN_TO_BE_REPLACED 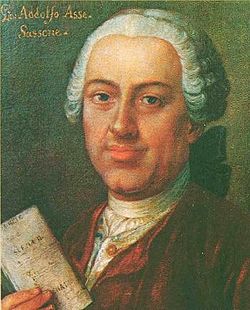 Johann Adolph Hasse (1699-1783) is one of those historically unfortunate composers who achieved great fame during their lifetimes but have since been more-or-less forgotten. A prolific composer of opera, he was hailed by Charles Burney as being superior to all other lyric composers. Married to the famed soprano Faustina Bordoni, the couple became the Posh and Becks of their day. Usually based in Dresden in the Court of the Saxon Elector Frederick III, Hasse  had special dispensation that avoided the need to travel annually to the Polish Court, where Frederick was also the elected King. He also maintained a post in Venice at the Ospedale degli Incurabili. He lived long enough to have performed in front of Bach and the young Mozart.

This was the modern première of the opera Demetrio, presented by the musically adventurous Opera Settecento.  Although the publicity suggested that we would hear the original 1732 Venice version, it was the later 1740 Dresden version that was performed. This included several new arias, but END_OF_DOCUMENT_TOKEN_TO_BE_REPLACED

Pergolesi is often seen as one-horse-wonder, rather unfairly as he died aged just 26, composing his famous Stabat mater just before his death.  His other works, including several operas, are usually ignored. He was one of the first composers (of around 70) to write an opera based on Metastasio’s take on Adriano in Siria (Hadrian in Syria), two years after the libretto was written, and two years before his death. The plot is based on the story of Hadrian in his days as Governor of Syria in Antioch (where he first became Emperor), and his love for his prisoner (and daughter of the Parthian King Osroa) Emirena who, in turn, is betrothed to Farnaspe, a Parthian prince. As these things inevitably go in opera seria, Adriano is married to Sabina, who, in turn, is loved by Aquilio. Rather bizarrely, Osroa tries to rescue his daughter by setting fire to the palace that she lives in. Of course, it all ends up well – the condemned Osroa is forgiven, Farnaspe marries Emirena, and Adriano stays with his wife Sabina.  END_OF_DOCUMENT_TOKEN_TO_BE_REPLACED

This might be the year that we grow to love pasticcio operas, with Fabio Biondi’s well received reconstruction of Vivaldi’s compilation L’Oracolo in Messenia at The Barbican (see my review at https://andrewbensonwilson.org/2015/03/30/vivaldis-loracolo-in-messenia/) and now Opera Settecento’s excellent concert performance of Handel’s 1732 Catone in Utica, given in Handel’s own church of St George’s, Hanover Square as part of the London Handel Festival.

Handel used to present one pasticcio opera each season, a collecting together of arias, generally by other composers, some of it already well-known to the audience, to slot into the recitative of an opera. In the case of Catone in Utica, Handel drew principally on Leonardo Leo’s 1729 Catone, to a libretto by Metastasio.  Handel reduced Leo’s recitatives and jettisoned all but eight of his arias, adding six by Johann Adolf Hasse (although not from Hasse’s own 1732 version of Catone), along with other arias by Porpora, Vivaldi and Vinci. He also removed one of Metastasio’s characters, leaving just five protagonists. As with most pasticco operas, the recitatives are all-important in carrying the plot. However the arias were more plot-neutral, and were therefore more easily transferred from other operas to suit the strengths of Handel’s available singers.

Metastasio’s libretto is based on the historic Cato the Younger (Marcus Cato ‘Uticensis’), an adversary of Julius Caesar in the last days of the Roman Republic. After Caesar’s defeat of Pompey, Cato and Pompey’s widow Emilia have fled to Utica, near Carthage, on the North African coast. Caesar arrives and tries to toady up to Cato, much to the disgust of Emilia and the confusion of Marzia, Cato’s daughter.  She seems to be rather taken with Caesar, despite her father’s wish that she marry Arbace, Prince of Numidia. Cato rejects Caesar’s offer to share the dictatorship of the empire (and marriage to Marzia, already Caesar’s secret lover), and is eventually defeated by Caesar’s army, leading to his suicide and the start of the dictatorship of Imperial Rome.

In Handel’s version, Cesare is changed to a bass, Cato was sung by the castrati Senseino, and Arbace was a contralto trouser role. One of the strengths of Opera Settecento’s performance was the excellent choice of singers. Christopher Jacklin was the imposing Cesare, his opening aria, Non paventa del mare le procella from Porpora’s Siface (one of four based on storm-tossed seas) being a spectacularly virtuosic showpiece with an enormous range, wide vocal leaps and rapid scales, all delivered with aplomb. Vivaldi’s So che nascondi was a similarly bravura aria.

Emilia was sung by Christina Gansch, a young Austrian soprano who impressed me (and the judges) when I heard her singing in the final of Innsbruck’s Cesti Baroque Opera Singing Competition in 2013. Her opening aria, Chi mi toglie (from Hasse’s Attalo) demonstrated her beautifully warm and well-rounded tone. She later excelled in Sento in riva a l’altre sponde (from the same Hasse opera), accompanied by hushed strings and featuring an excellent expansion of the melodic line in the da capo.  Her concluding virtuosic showpiece Vede il nocchier la sponda, again with outstanding treatment of the da capo and a wonderful cadenza, drew enthusiastic approval from her fellow singers.  Although this was a concert performance, I was very impressed with Christina Gansch’s acting ability.

Erica Eloff was Marzia.  Her arias ended all three of the Acts, positively with È follia se nascondete, mournfully with So che godendo vai and stunningly virtuosic with the conclusion of the opera, Vò solcando un mar crudele.

Emilie Renard seems to be cornering the market in trouser roles, always helped by her choice of clothing and attractive acting

ability. Here she was Arbace, her showpiece coming with Vivaldi’s Vaghe luci, luci belle, featuring outstanding da capo ornamentation and vocal flourishes. The role of Catone was to have been taken by counter-tenor Andrew Watts, but his indisposition led to his very short notice replacement by Christopher Robson, much to his credit.  Sadly, he was not on good form vocally, with an over-use of portamento and awkward breaks of register, although his concluding Per darvi alcun pegno was touching as Catone resigns himself to his fate.

I was very impressed with Tom Foster’s light touch direction from the harpsichord, as well as his sensitive continuo realizations, allowing himself just one real flourish as Arbace and Cesare, rather awkwardly reveal their joint love for Marzia. The youngish instrumentalists of the Orchestra of Opera Settecento played with musical sensitivity, with a notable contribution from cellist Natasha Kraemer. Oboeist Leo Duarte was responsible for producing the score, based on a manuscript from Hamburg.