The Orchestra of the Age of Enlightenment continue with their Covid series of on-line OAE Player concerts with Sea Voyages and Salvation, with music by Grauper, Telemann and Bruhns, culminating in Bach’s cantata Ich will den Kreuzstab gerne tragen. Whether by design or default, two of the composers were the first and second choices for the post of Thomaskantor in Leipzig which Bach was eventually offered after Graupner and Telemann turned it down.

END_OF_DOCUMENT_TOKEN_TO_BE_REPLACED Taking its title from Biber’s Mystery Sonatas (although not actually including any of those pieces), this recording from Les Surprises delves into the mysteries of life and death with an exploration of late 17th-century North German sacred cantatas of Buxtehude, Bruhns and Bernhard. What was particularly interesting for me to listen to, as an organist, were the arrangements of two well-known ground bass organ pieces for instruments. The CD opens with a version of Pachelbel’s Ciaconna in F minor, based on a repeated descending four-note bass line. We are then plunged straight into the world of death, with the Klag Lied, Buxtehude’s extraordinarily moving reflection on the death of his own father, whose last days were spent in his son’s home in Lübeck. It is followed by Nicolaus Bruhns’ cantata for bass voice meditation on death, De profundis clamavi and the second of the instrumental arrangements of organ pieces, Buxtehude’s Passacaglia in D minor. The programme notes (perhaps rather too unquestionably) the admittedly rather good theory that this is based on the lunar month and the phases of the moon, with its 28 variations and four sections, each with a distinctively different mood.  END_OF_DOCUMENT_TOKEN_TO_BE_REPLACED 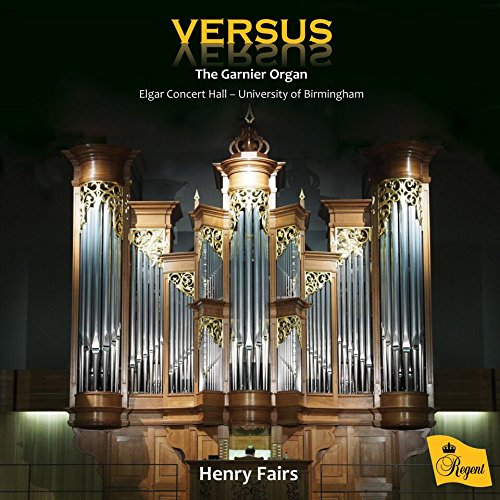 This is the first recording of the new Garnier organ in the Elgar Concert Hall of Birmingham University. It is played by the organ’s curator, Henry Fairs. He is Head of Organ Studies at Birmingham Conservatoire and was closely involved with the installation of the Garnier organ. A well-chosen programme demonstrates the organ, and its companion continuo organ, as well as some impressive playing by Fairs. He opens and closes with major Bach works, the better-known opening Toccata, Adagio, and Fugue (BWV 564) given a subtly individual reading that adds interest without approaching the mannerisms of some organists who feel the need to do something different. An example is performing the sprightly fugue on a massive chorus based on a 16′ manual reed. The lesser-known concluding Praeludium in C (BWV 566a), which might originally have been in E major) is given a similarly grand interpretation.
END_OF_DOCUMENT_TOKEN_TO_BE_REPLACED

Nicolaus Bruhns (1665-1697) is one of the most important organist/composers of the North German 17th century Baroque: that extraordinary outpouring of music that over the whole century developed and honed a distinctive style that the likes of Handel and Bach carried forward into the 18th century. The favourite pupil of the famed Lübeck organist, Dietrich Buxtehude, Bruhns came from a family of musicians. He came from Husem, then part of Denmark, but his family had strong musical connections with Lübeck. After a time in Copenhagen, Bruhns returned to Husem as city organist, where he remained until his untimely death, aged just 31.

Only 12 vocal works and 5 organ pieces survive, but all are of an exceptionally high standard, technically and musically. All 12 of his END_OF_DOCUMENT_TOKEN_TO_BE_REPLACED

One of the musical traditions of German Lutheran church music was the sacred cantata or motet addressed directly to God, often in a conversational style, with a response to the plea coming either from God or, more frequently, from Jesus or other believers. This CD explores several examples of this genre, with a focus on the composer Andreas Hammerschmidt, given an overdue bit of exposure.  Although he was well known in his day, and composed more than 400 works, his music is not often performed today. It is in a relatively simple style, in comparison with his contemporaries, and shows the gradual development of a true German Baroque style, built on the influence of Italian models. Five of his vocal works are included here, together with an instrumental Pavane. END_OF_DOCUMENT_TOKEN_TO_BE_REPLACED