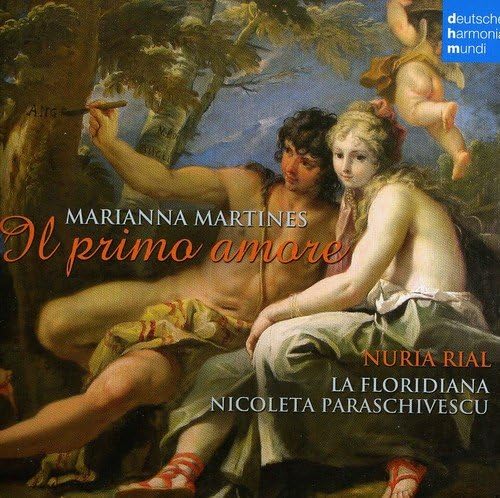 Regular followers will have realised that I am using the lack of live concerts during coronavirus lockdown to catch up on CD reviewing. This one dates back to 2012, the 200th anniversary of Marianna Martines’ death. Quite why it took so long to reach the top of the pile is beyond me, but it is certainly worth reviewing. Marianna Martines (1744-1812) is one of the rare examples of a female musician that held her own amongst her distinguished male musical colleagues in Vienna. This recording, with four of the five pieces being world premiers, is a long-overdue acknowledgement of her position in the musical hierarchy of late 18th century Vienna.

An extraordinary combination of domestic arrangements gave the young Marianna something of a musical head start. She was born in a large apartment building next to the Michaelerkirche in central Vienna, just outside the entrance to the Hofburg. While the ground floor housed the dowager Princess Esterházy, the Martines lived higher up, along with Porpora, Metastasio and the young Hadyn. All three had a profound influence on Marianna Martines. She was the first woman to join the Accademia Filarmonica of Bologna, and the English musical traveller Charles Burney called her “the most perfect lady singer I have ever heard”.

Marianna played keyboard duets with Mozart and inherited Metastasio’s harpsichord and music library when he died. He had been key to her early musical education, arranging singing lessons with Porpora with Hadyn playing the harpsichord and composition lessons with Hasse. Both Hasse and Porpora had come to Vienna from Naples, and it was the origin of the Martines family, so it is not surprising that there is a strong Neopolitan influence in her music, including the use of partimento – the art of creating complete compositions from a bass line, figures or otherwise.

As well as frequent musical appearances in front of the Empress Marie-Theresa (where the Emporer Joseph II turned the pages for her), she ran her own musical events at the family home. Her music reflects the Galant style of the period. the two vocal works were presumably intended for her to sing herself, and demonstrate a skilful technique, here shadowed by the impressively clear-toned soprano Nuria Rial. Marianna’s keyboard skills are similarly demonstrated by a harpsichord concerto and a Sonata, both very attractive pieces written when she was in her very early 20s, as was the example from the 24 Arias setting Metastasio texts published in 1767.

Nicoleta Paraschivescu’s skills as a harpsichord player and musical director are apparent from this recording. Her impressive Swiss-based, period-instrument ensemble La Floridiana is named after a palace in Naples, which is appropriate for Marianna Martines’ style of music. The booklet has notes and full libretti in German, English and French.