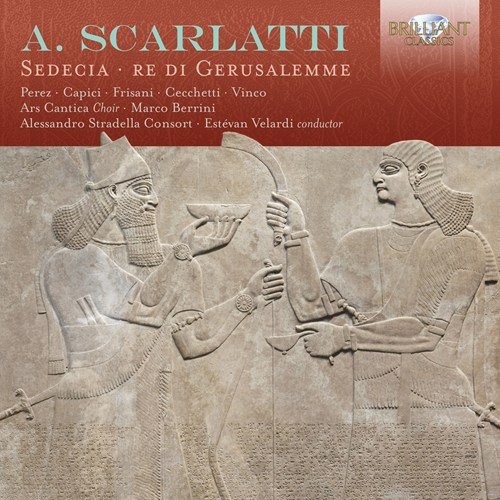 This is a reissue of a 1999 studio recording by the  Alessandro Stradella Consort of Alessandro Scarlatti’s 1706 oratorio Sedecia: Re di Gerusalemme. It shares many characters with Verdi’s 1841 opera Nabucco, both based on an Old Testament story of military ambition and corrupted power.

Composed during one of the more complicated periods of Italian and Papal music-making, Scarlatti’s oratorio falls within the conventions of the Roman oratorio tradition. At a time when opera was, at best frowned on, the rise of the sacred oratorio filled a musical gap. Usually performed during Lent in churches rather than theatre, these oratorios were a neat way of circumventing the performing restrictions of the time.

It is rather loosely based on the Old Testament story of  Zedekiah, King of Judah. He was put on the throne by the Babylonian King Nebuchadnezzar following the siege of Jerusalem c600 BCE. He revolted against Nebuchadnezzar, leading to the siege of Jerusalem and his eventually blinding. For a biblical oratorio, God seems to play little or no role in things. There is no strong ethical message, leaving it to be a relatively straightforward reflection of a biblical tale.

Occasionally the recording shows its age, but is generally acceptable. Although it is a studio recording, there are occasional elements of spatial depth, with some singers seeming to be more distant than others, with some suggestion of movement towards the microphone. The five singers use rather too much vibrato for my tastes, and I am sure a recording made more recently would be rather more period-appropriate.

The liner notes (only in English) include an essay on the background to the work, and well-structured ‘walk-through’ the oratorio.