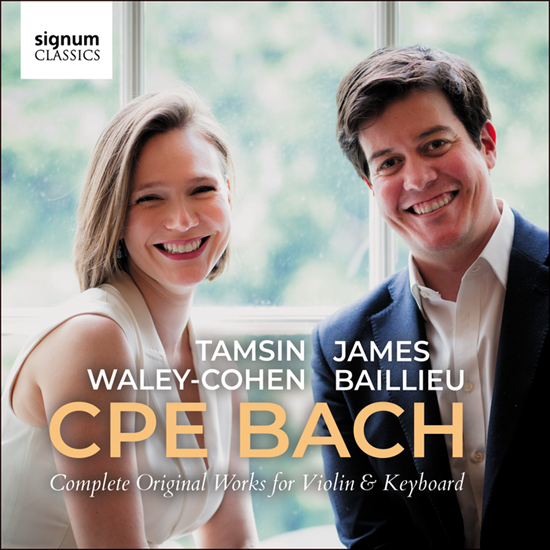 My heart sank when I read the blub for the recording, announcing “The full power and range of Stradivarius plus modern Steinway grand in the service of CPE Bach’s eight violin sonatas”. The liner notes go on to opine that “CPE Bach would have embraced the colour and dynamic possibilities that a Steinway and Stradivarius can create”. This was an argument that was dismissed decades ago by most in the organ world when it came to the performance of JS Bach’s organ music on large-scale romantic organs – or indeed, performance on modern orchestral instruments with 20th-century techniques, such as vibrato. But as I listened I grew more tolerant of the sound and the playing.

The sensitivity of James Baillieu’s playing on the Steinway, however ‘grand’ it might be, reveal an impressive delicacy of tone and colour that totally belies the description of “full power”. His clarity of articulation, gentle touch and neatly applied ornaments are stylistically appropriate, although the sound is still a long way from that of the fortepiano, harpsichord or clavichord that CPE Bach had in mind. Tamsin Waley-Cohen adopts a similar musical sensitivity in her violin playing,

The music is arranged in the order of their ‘Wq’ numbers – an outdated system, now replaced by ‘H’ numbers, although they are not mentioned on this recording. They are more-or-less in chronological order, ranging from the youthful sonatas of 1731 Wq71–3, revised in 1746) to the later works published in 1754/63 (Wq74 & Wq75–8). That gives the chance to follow Bach’s development from his early Baroque-inspired pieces to his later dramatic Sturm und Drang period.

Most of the pieces have the keyboard as the more dominant instrument, the violin commenting or dueting with it. The recording balance is excellent, allowing the violin to speak clearly through the tone of the piano. It was recorded in the Britten Studio, Snape.

By all mean give this recording a try, but do compare it with this recording, using a harpsichord after Blanchet (1730), ad fortepiano after Walter (1795) and an original from the Gagliano school (c1730).