The idea of pairing Bruckner with organ music at the Proms is not new and makes sense, not least because Bruckner gave several organ recitals in the Royal Albert Hall. Bearing in mind that most people would have come to this Prom to hear Bruckner 8 rather than a short sequence of well-known organ works, there seems to have been a misjudgement in both the choice of organ pieces and the performance. The Royal Albert Hall organ is capable of the most enormous sounds, with power that will easily out-blast the largest symphony orchestra, as evidenced during the Glagolitic Mass in Prom 1 (reviewed here). It is also capable of producing a vague impression of the sort of sound that Bach might have known, albeit at considerable loss of power and aural presence. Michael Schönheit, the organist of the Leipzig Gewandhaus, fell into the uncomfortable gap between these two possibilities, choosing registrations that muddied the music but made no real aural presence in the hall.

The opening Fantasia in G minor would have been the ideal opportunity to give the Bruckner audience a bit of a blast. But the middle-of-the-road registration, combined with less than accurate playing,  rather shaky control of rhythm and pulse, and a lack of the improvisatory bravado that the piece suggests was all rather underwhelming. That said, the registration sounds better on the BBC iPlayer replay of the live recording, helped by microphone placings closer than any member of the audience. This would have been an ideal chance to demonstrate to a capacity crowd, who are probably not natural organ-recital attendees, just how thrilling organ music can be. Amongst several other issues was a disruptive articulation mid-subject at the opening the ‘St Anne’ Fugue (an articulation that wasn’t repeated on the second, or any other appearance of the subject) and playing the central section far too fast; both for the acoustic and the speed that Bach’s score clearly indicates.

And so to Bruckner 8, his final symphony, here performed in the revised 1890 version. I admit that I am not always a strong Bruckner fan, and this symphony does raise some of the reasons why. Much of the music comes in a series of enormous aural waves, starting from the slightest ripple and building up to climaxes of brass-reinforced tsunami proportions. Although there are some very attractive moments, notably from the woodwind, the overall proportions of the pieces (timed here at a typical 80′) seem to demand more sense of propulsion – from the composer, not the performers. 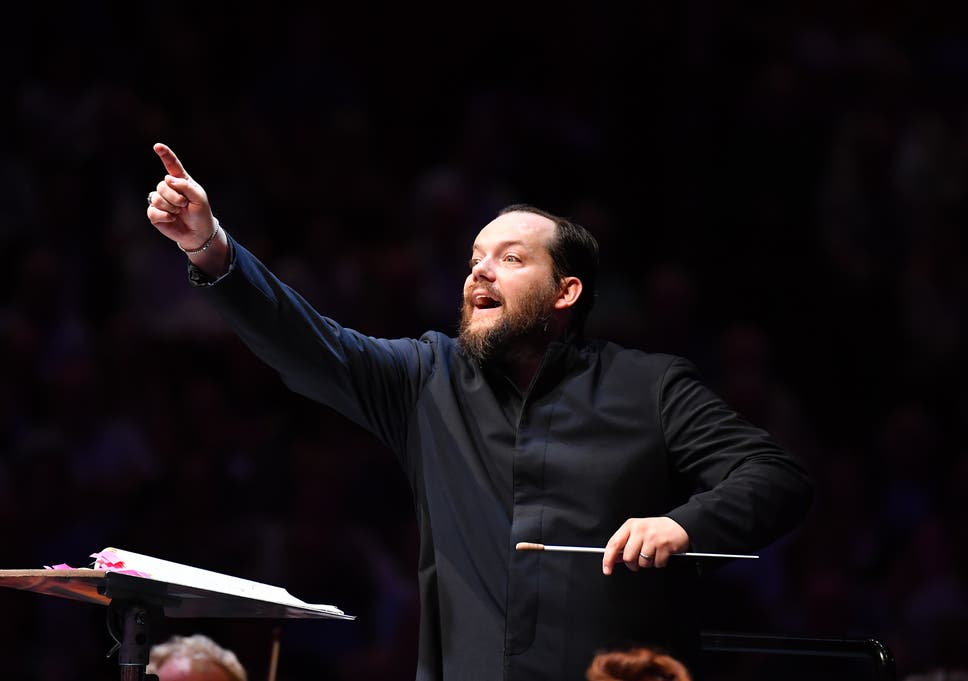 That said, Andris Nelsons and Gewandhausorchester gave a very fine performance, with notable contributions from Domenico Orlando, oboe (with some lovely little meows at the end of the first theme of the first movement), Clemens Roger, horn, Judith Hoffmann-Meltzer, flute, and, particularly in the final movement, Merek Stefula, making himself felt on timpani. The orchestral layout was slightly unusual, although I am not sure if it might have been based on any evidence from Bruckner himself. The brass, horns and Wagner tubas were all positioned to the left of the stage, as were the double basses. Those who bought tickets on that side of the hall, hoping to get the full blast of the brass from the opposite side of the stage might have been disappointed.

Andris Nelsons took good control of the many crescendos, although nobody can avoid the brass entries as being something of an aural step-up. His treatment of the subdued conclusion to the first movement reinforced the notion that very quiet moments can sound particularly effective in the Royal Albert Hall acoustic. The insistent repetition of the little five-note motif in the extension Scherzo gives it an almost ritual feel, in this version relieved by the elegiac Trio. The expansive Adagio respected Bruckner’s own indication for it to be “slow and solemn, but not dragging”. The music was apparently revealed to him when he “looked into a girl’s eye”, something that clearly created strong feelings. The build-up to the enormous climax was exceptionally well controlled by Nelsons, as was the concluding moment of repose.

Bruckner considered the monumental finale to be ‘the most significant movement of my life’. Like the first movement, it has three themes, all linked to the earlier movements. Some magnificent timpani wallops added to the martial feel of the opening brass chorus before the series of climactic waves begin again. The coda was another example of Andris Nelsons excellent ability to control crescendos. Recollecting all the themes, the mood begins to swing from despair to, perhaps fleeting, confidence in the final blaze of C major. A long, but exhilarating evening.