For anybody who was not already familiar with the story of Purcell’s Dido and Aeneas, the Academy of Ancient Music’s semi-staged performance (directed by Thomas Guthrie) at The Barbican opened with something of a plot-spoiler. The first half was a 40-minute exploration of the funeral rites of the dead Dido, albeit a couple of hours or more before she was ‘laid in earth’. Actually, laid in earth she wasn’t, instead lying on a funeral catafalque over which Belinda, Aeneas and assorted mourners (the AAM chorus, who opened the show with some rhythmic drum bashing) acted out their reaction to her death as they remembered her. And when I write ‘she’ in fact it was a half-size puppet of the upper half of Dido who represented her throughout the evening. The full panoply of puppets came to the fore in the second half performance of Dido and Aeneas itself where the entire cast of soloists and chorus sported puppets – torsos for Dido and Aeneas, heads and gauze cloths for the rest.

In an interesting switching of the usual director/conductor roles, the idea of the opening sequence was suggested by Richard Egarr, the music itself chosen by Thomas Guthrie, avoiding any inappropriate Christian references, but otherwise choosing “music that he liked”. It was a good choice, the segued sequence ranging from the intensity of the opening Sonata No.1 in G minor (played beautifully by Bojan Čičič and Persephone Gibbs, violins, and Imogen Seth-Smith, viola da gamba to instrumental pieces for full orchestra (the two Chaconas in G minor (Z730, Z807) and Rowan Pierce’s beautifully sensitive ‘So when the glittering Queen of Night’, sung in role as Belinda. The emotions of both Belinda and Aeneas were plain to see, at one stage the latter angrily pushing the former to the floor. 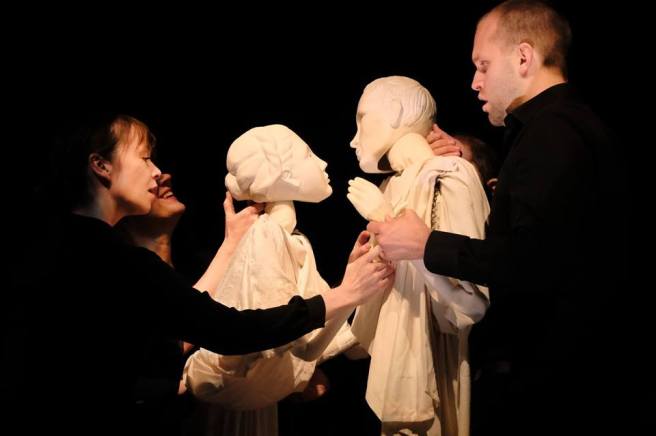 The opera itself took the puppet theme further, with the entire cast sporting puppet heads or, in the case of Dido and Aeneas, half-length torsos each manipulated by the soloists and puppeteers Laura Caldow and Ben Thompson. Puppets are one of Tom Guthrie’s things, and they can be very successful in distancing the singer from the music sung, allowing the audience to project their own interpretation onto the (literally) blank faces of the puppets. But on this occasion, the lighting meant that the singers, and the supporting puppeteer, were all too visible, albeit intermittently. I have mixed feelings about this. Given the setting and the size of the cast, it was obviously impossible to have only the puppets visible, so we ended up with a half-way house, with moments of beauty contrasted with moments of visual confusion as the two puppets of Dido and Aeneas competed for attention with the two singers and their companion puppeteers. Another factor was the fact that the faces were of fixed gaze, but the hands were often very expressive. I wanted it to work, but am not entirely convinced that it did.

Musically it was a triumph, with Purcell’s exquisite music channelled through Caitlin Hulcup as Dido, Rowan Pierce as an excellent Belinda,  Ashley Riches as Aeneas, and Neal Davies as a bass Sorceress – the latter mercifully shorn of the usual hamming-it-up. The acting and puppet manipulation skills required, on top of singing, were an enormous challenge. Of the instrumentalists so far unnamed, guitar/theorbo players William Carter and Eligio Luis Quinteiro took the honours, notably for some evocative interludes. Director Richard Egarr was joined by Alistair Ross on the two continuo harpsichords, the latter stepping out for a bit of bass-drum bashing. Richard Egarr direction and vision of the whole piece was impressive, although he couldn’t resist joining in with the sailor’s antics. The AAM Choir excelled in the funereal ‘No stars again shall hurt you from above’ and in the varied chorus scenes in the opera itself, including a riotous sailors scene.

The final lament was beautifully done, avoided too much pathos over and above what Purcell provides, the final chorus expressing the grief of Belinda over the prone figure of the Dido puppet (pictured below). I would like to see this in a filmed performance, where the lighting can be better controlled.