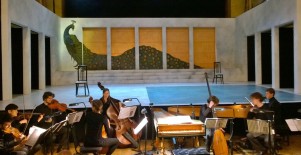 Awaiting the construction of their new concert hall, the Royal Academy of Music have been trying out different venues in the past year. For their final opera of the season, Monteverdi’s L’incoronazione di Poppea, they chose Shoreditch Town Hall (a space new to me) in the middle of a very lively and cosmopolitan part of London. There was some awkwardness in the staging arrangement as the audience enter past what would normally be back-stage, but they coped with this well. The staging was simple, a three-sided box with three entrances on either side, and five in the rear wall. There were very few props, with much depending on Jake Wiltshire’s excellent lighting to provide mood, most prominently at the end of Act 1 when Seneca’s death is depicting by a flood of red light.

Poppea is one of the more complex operas to stage, with many characters and a myriad of interconnections between the roles. John Ramster’s production combined with excellent singing, and particularly acting, to bring a real insight in to the sorry tale. Key is the role of Nerone, here acted and sung splendidly by Eve Daniel in a very imposing trouser role. Tall and imposing in stature, she was ideal for the role. She seemed to relish the conflicting aspects of the young psychopath, ranging from sheer brutality, delivered without any qualms, to a very brief, but telling look of a vulnerable young boy. As the scheming Poppea, Emma Stannard was similarly adept at character portrayal. The gentle countertenor Patrick Terry’s hapless Ottone was perfectly matched by Claire Barnett-Jones’s far from gentle Ottavia. Seneca was the imposing bass, Timothy Murphy, brilliantly grasping the inner conflicts and external stoicism of the voice of reason in a world that is so far from reasonable.

One of the joys, and complications, of Poppea is the multitude of characters, several of which are ideal for cameo performance. Drusilla is one such, sung with conviction be

Lorena Paz Nieto. I also liked Alys Roberts’ portrayal of Amor, ever present on the stage, quietly manipulating things. The final duet between Nerone and Poppea, Pur ti miro, pur ti godo, can be interpreted in many different ways, but this was one of the most powerful and they sing for their (apparent) love for each other, while slowly strangling Amor to death. A powerful conclusion to a well produced, very well acted, and well sung performance. My only quibble, and it is a general one that applies to most conservatories in the UK, is the excessive vibrato that these young singers have been allowed to develop so early in their careers. Easy to develop, but hard to control, I do wonder why it seems to be felt necessary by singing teachers to allow their students to produce this type of voice.

The 10 instrumentalists, directed by Jane Glover, who also played one of the two harpsichords, seemed very comfortable with the musical style of this early baroque masterpiece, coping well with the changing rhythms. It was good to have them just below stage level, where the sound and their presence was far more obvious than when sunk in a pit. This was a powerful musical experience.